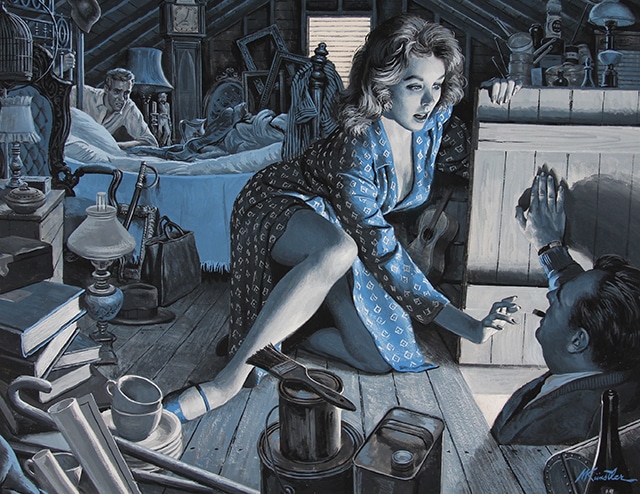 Winchester, VA 07/24/15…The last chance for Shenandoah Valley residents to see the popular exhibition now on display at the MSV, Mort Künstler: The Art of Adventure, is drawing near. A retrospective exploring the career of renowned artist and illustrator Mort Künstler (b. 1931), the exhibition is only on view in the Museum of the Shenandoah Valley (MSV) through Sunday, August 2, 2015.

The exhibition’s final week in the MSV will be highlighted by a free admission day from 10 a.m. to 4 p.m. on Wednesday, July 29.

Featuring more than 80 works executed in a variety of genres, Mort Künstler: The Art of Adventure has been organized by the Norman Rockwell Museum, Stockbridge, Massachusetts. According to MSV Director of Exhibitions Corwyn Garman, community response to The Art of Adventure has been extremely positive. He notes that more than 10,000 visitors have toured the exhibition since its May opening. Many of them, he says, have been surprised and delighted to learn about the depth and breadth of Künstler’s body of work, as most previously considered the artist to be solely focused on subjects related to the Civil War.

While particularly known for his meticulously researched paintings of the American Civil War, Mort Künstler is also a prolific illustrator whose adventure and sporting images have entertained people for six decades. The exhibition features original artworks created for such popular publications as Sports Afield, Outdoor Life, Stag, and Male and also includes movie posters, book jackets, advertisements, and more.

To those who know Künstler only for his Civil War scenes, the works on view in the exhibition may seem unexpected. Many visitors have been surprised to learn that Künstler created the illustration for the famous 1976 MAD Magazine cover which parodied the Jaws movie poster by featuring the magazine’s mascot, Alfred E. Neuman, swimming from a shark.

Works in the exhibition range from a sketch of Künstler’s childhood bedroom, which the artist drew when he was eight years old, to more recent works. Among the latter are an image, painted in 2011, of George Washington crossing the Delaware River and advertisements created in 2012 for Maximus Vodka. In addition, the exhibition recognizes some artists who inspired Künstler with the inclusion of works by Norman Rockwell, Winslow Homer, and N.C. Wyeth.

Künstler credits his work for men’s adventure magazines in the 1950s and 1960s with teaching him how to compose and tell a story. That work, he said, “prepared me for all of the work I did later, including advertising art, movie posters, and historical paintings.” In addition to numerous magazine illustrations from the 1950s and 1960s, notable works in the exhibition include story illustrations for The Godfather, the poster for the 1972 movie The Poseidon Adventure, and a series of paintings commemorating the 1981 launch of the Columbia Space Shuttle.

In 1982 CBS-TV commissioned Künstler to provide art for the miniseries The Blue and The Gray, and that began his long association depicting Civil War scenes. Künstler has painted more than 350 Civil War subjects, including several scenes set in the Shenandoah Valley. Mort Künstler: The Art of Adventure includes six paintings of Civil War subjects and four studies related to one of those paintings.

The MSV display of Mort Künstler: The Art of Adventure has been sponsored locally by Beyer Volvo and Volkswagen of Winchester and The Winchester Star. Following its display in the MSV, the exhibition will travel to the Citadelle Art Foundation in Canadian, Texas.

The Museum of the Shenandoah Valley is located at 901 Amherst Street in Winchester, Virginia. The MSV complex—which includes galleries, the Glen Burnie House, and six acres of gardens—is open Tuesday through Sunday from 10 a.m. until 4 p.m. The Museum galleries are open year-round; the house and gardens are open April through October. Admission is $10 or $8 for seniors and youth ages 13 to 18. General admission is always free to youth ages 12 and under and to MSV Members, and thanks to generous sponsorship from Howard Shockey & Sons, Inc., it is free to all every Wednesday. During the weeks between Memorial Day and Labor Day, the house and gardens will be open free of charge each Wednesday until 8 p.m.  Additional information is available at www.theMSV.org or by calling 540-662-1473, ext. 235. –END–