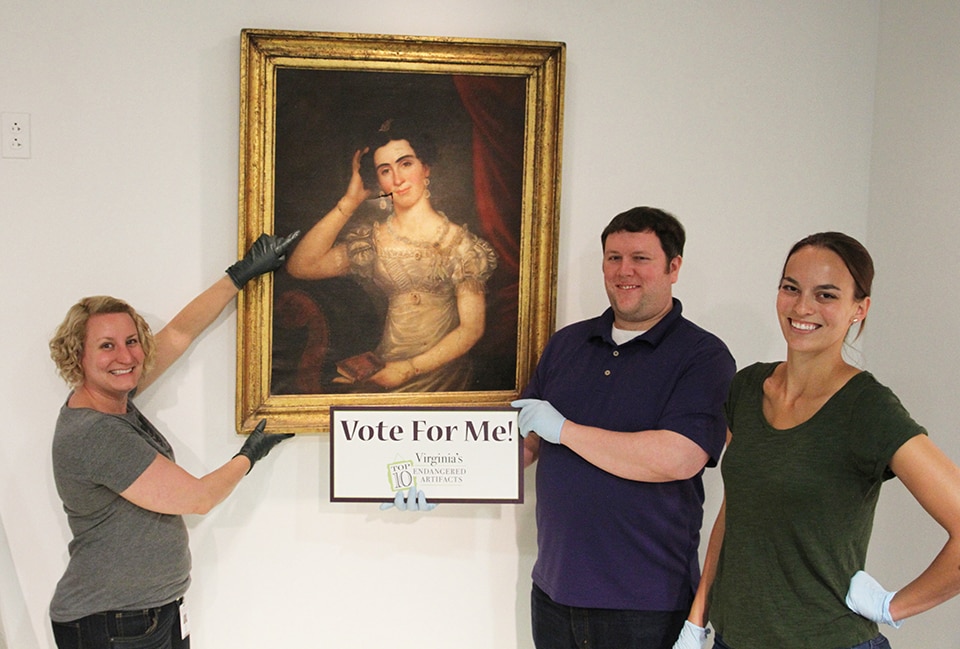 VOTE for the MSV

Winchester, VA 8/24/16…A nineteenth-century portrait in the Museum of the Shenandoah Valley (MSV) Collection is entered in the 2016 Virginia’s Top 10 Endangered Artifacts Competition. Twenty endangered artifacts are in the competition, and the public is invited to vote for its favorite now through August 31 in an online voting poll at www.vatop10artifacts.org.

A project of the Virginia Association of Museums, Virginia’s Top 10 Endangered Artifacts 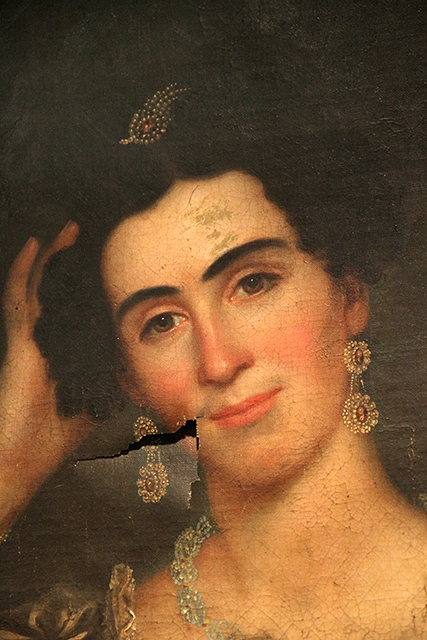 Competition began in 2011 to raise public awareness of the work museums do every day to care for the objects in their protection.

According to A. Nicholas Powers, MSV curator of collections, this is the third year that the Museum has nominated an artifact in the competition. A portrait miniature from the MSV Collection was named one of the Top 10 Endangered Artifacts in 2014 and the MSV’s nineteenth-century portrait of Storer College founder Reverend Nathan Cook Brackett received the People’s Choice honor last year. As a result of exposure garnered during the competition, donations were received to conserve both MSV-nominated artifacts.

Powers notes that the MSV selected this year’s artifact from the many objects with conservation needs in the MSV Collection because treatment is necessary to confirm that the portrait depicts a Shenandoah Valley sitter. In its current state, a rip disfigures the painting and layers of grime and discolored varnish hide fine details that would help scholars determine the date of the painting, the artist who painted it, and the sitter depicted. Powers notes that if the MSV is able to confirm that the woman in the painting is a Valley sitter, the work would be an important component in the MSV’s growing collection of nineteenth-century Valley portraits.

The MSV acquired the portrait in 2007 from a descendant of the sitter. According to family tradition, the sitter—believed to be Mary Wood Early—worked as a nursemaid for the Latham family of Winchester caring for an infant whose mother had died. Family lore also suggests the woman married an officer in the military with the surname Early and that she is buried in Richmond. Powers notes that the work is attributed to Maryland-born artist George Esten Cooke (1793–1849), a prolific portrait painter of the antebellum period who travelled frequently throughout the Shenandoah Valley and Richmond in the 1820s and 1830s.

Fragile and in need of conservation, the portrait is on display in the MSV Shenandoah Valley Gallery during the online voting through August 31. According to MSV Registrar and Collections Manager Kyle Bryner, in addition to the tear in the canvas, the portrait has actively flaking paint. Bryner also notes that the back of the canvas bears an illegible signature or set of initials which treatment may reveal. The cost to repair the tear and clean the painting is estimated at $2,000.

The MSV asks area residents to vote for this special object at www.vatop10artifacts.org. The website also provides a way to make a donation for the conservation of any of the 20 nominated artifacts on the “Top 10” web ballot. Selected by an independent review panel of collections and conservation experts, the final “Top 10” Honorees will be announced on September 27.

The MSV owns and cares for more than 11,000 objects, including a collection of Shenandoah Valley objects, the fine and decorative objects inherited and acquired by MSV benefactor Julian Wood Glass Jr., and the R. Lee Taylor Collection of miniature houses and rooms. Along with the portrait of Mary Wood Early, MSV objects most needing conservation include statues in the MSV’s Glen Burnie Gardens and paintings and furniture from its Shenandoah Valley Collection.

A regional cultural center, the MSV is located at 901 Amherst Street in Winchester, Virginia. The MSV includes galleries, the Glen Burnie House, and seven acres of gardens. The galleries and exhibitions are open year-round; the house and gardens are open April through December. Admission is $10 or $8 for seniors and youth ages 13 to 18. General admission is always free to youth ages 12 and under and to MSV Members. Thanks to sponsor Howard Shockey & Sons, Inc., admission is free to all every Wednesday. Now through August 31 extended summer hours are in effect and the MSV is open free of charge each Wednesday until 8 p.m.  Additional information is available at www.theMSV.org or by calling 540-662-1473, ext. 235. –END–