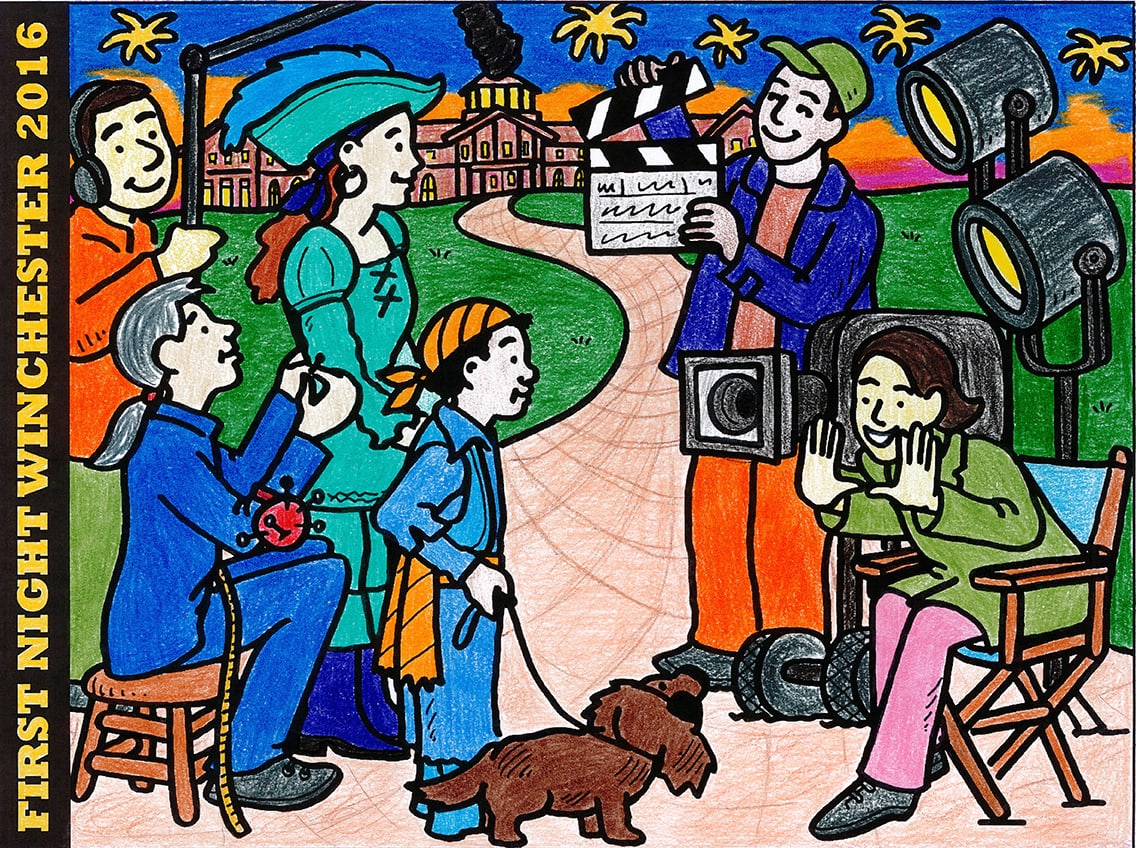 Drawn by Shenandoah Valley artist John Burns, this year’s picture illustrates the First Night Winchester 2016 theme of “illumination” by depicting the “lights, camera, action!” of filmmaking. The picture also celebrates CUT! Costume and the Cinema, a special exhibition of costumes from period films currently on view in the MSV. CUT! depicts five centuries of style and displays 43 costumes worn by Hollywood’s biggest stars including Johnny Depp in Pirates of the Pirates of the Caribbean, Kiera Knightley in The Duchess, and Kate Winslet in Finding Neverland. 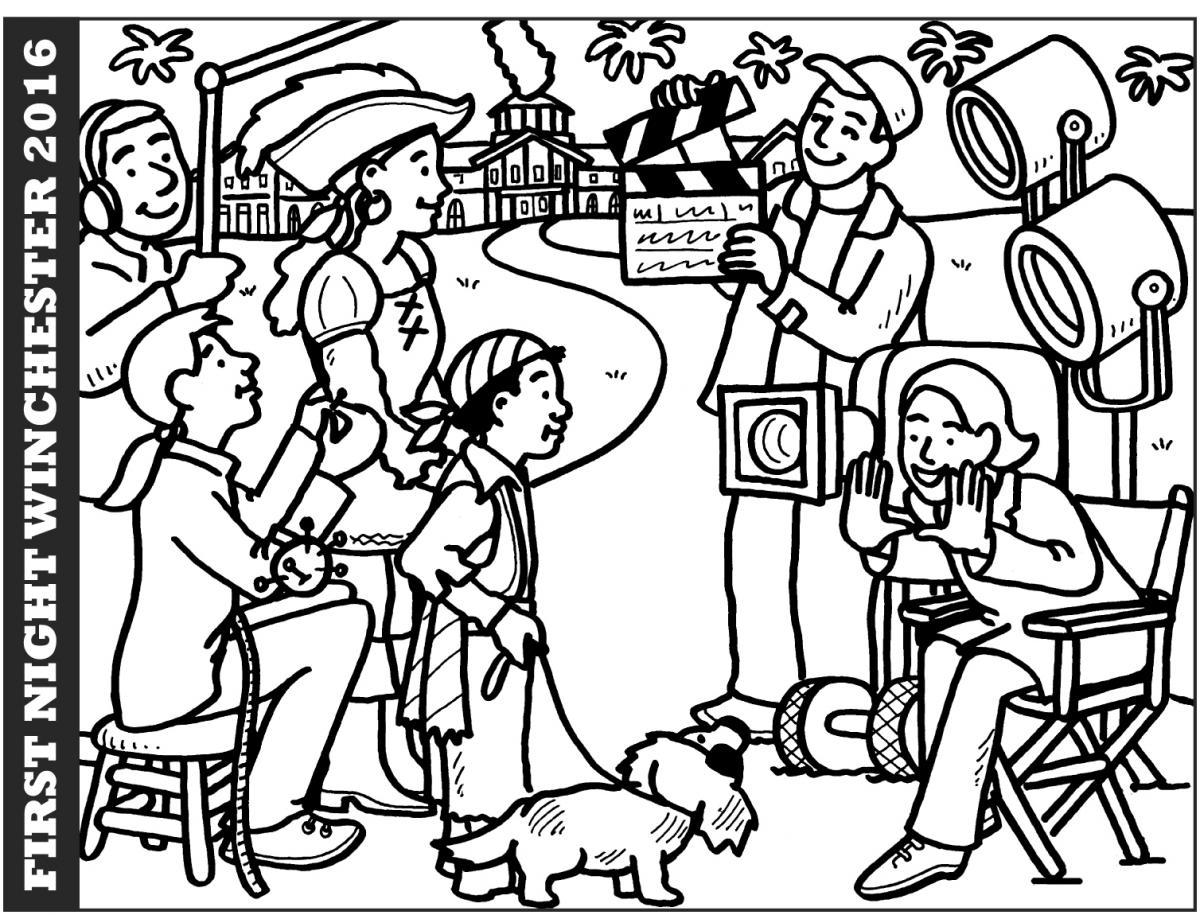 Every coloring contest participant will receive one complimentary admission ticket to visit the MSV, and one lucky participant from each age group—child (7 and under), youth (8–12), teen (13–17), and adult (18+)—will win a one-year family Membership to the MSV ($75 value), a family four-pack of buttons to First Night Winchester ($40 value), a package of McDonald’s ® gift cards ($25 value), and two tickets for a movie at the Alamo Drafthouse Winchester, including free popcorn at the theater. Contest winners will be contacted on December 29. The four winning entries will be on display in the MSV lobby on December 31.

According to MSV Community Programs Coordinator Autumn Gray, this is the fifth year that the MSV has sponsored the coloring contest and served as a daytime entertainment venue for the First Night Winchester celebration.

On New Year’s Eve, the MSV will be open from 10 a.m. until 4 p.m. offering family-oriented entertainment and free admission to the MSV galleries to all wearing a First Night Winchester 2016 button, MSV Members, and ages 12 and under. For all others, regular MSV admission rates apply ($10; $8 youth/senior). Throughout the day, visitors may enjoy face painting by Glitterbugz, balloon creations, and a hat-making craft. One-man-band and children’s musician Peter McCory will entertain from 11 a.m. to 3 p.m., and Ronald McDonald is scheduled to drop by the MSV, too.

Those interested in participating in the coloring contest may pick up free coloring sheets at the MSV Visitor Information Desk and the Winchester-Frederick County Visitor Center on Pleasant Valley Road. Coloring sheets may also be downloaded from the MSV website www.theMSV.org and the First Night website at www.firstnightwinchester.com. To be eligible to win a prize in the contest, participants must bring (or mail) completed coloring sheets to the Visitor Information Desk in the Museum of the Shenandoah Valley by 4 p.m. on Tuesday, December 29, 2015.

The Museum of the Shenandoah Valley is located at 901 Amherst Street in Winchester, Virginia. The MSV is open from 10 a.m. to 4 p.m. Tuesday through Sunday. Museum admission is not required to obtain the coloring sheet or visit the Museum Store where First Night buttons will be available for purchase from December 21 through 4 p.m. on December 31. The MSV will be closed on December 24 and 25, and January 1. Additional information is available at www.theMSV.org or by calling 540-662-1473, ext. 235. – END –

About CUT! Costume and the Cinema:

On view in the MSV Changing Exhibitions Gallery through February 28, 2016, CUT! takes an in-depth look at the art of making costumes for period films. The exhibition displays 43 costumes depicting five centuries of style. Films represented in CUT! depict history, drama, comedy, fantasy, and adventure from the 1500s to the 1900s through costumes worn by such film stars as Johnny Depp, Kate Winslet, Heath Ledger, Emma Thompson, Robert Downey Jr., Anjelica Huston, and many others. In all, more than 30 actors and 25 films are represented, including Pirates of the Caribbean, Sense and Sensibility, The New World, Gosford Park, Sherlock Holmes, and The Phantom of the Opera. CUT! Costume and the Cinema is organized by Exhibits Development Group, USA in cooperation with Cosprop, Ltd., London, England. The MSV display is sponsored by the Alamo Drafthouse Winchester and Shenandoah Country Q102.