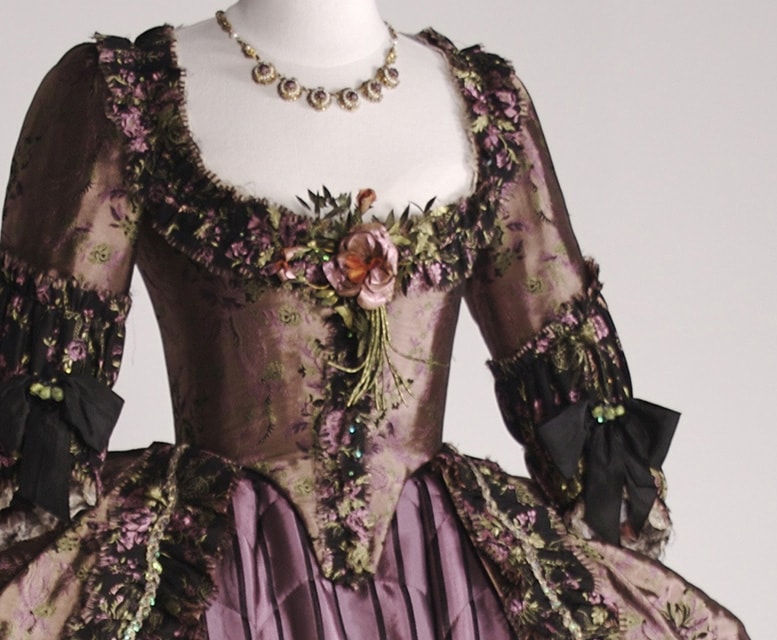 Winchester, VA 01/12/16…Professional costume designers Cheryl Yancey and Jennifer Adams will provide a rarely seen look at the world of costume design during the lecture, “The Life of a Costume,” at 7 p.m. this Thursday, January 14, at the Museum of the Shenandoah Valley (MSV).

The evening program also includes, from 6 to 7 p.m., special nighttime access to CUT! Costume and the Cinema. A major traveling exhibition featuring 43 costumes from period films, CUT! is on view in the MSV through February 28, 2016. Films represented in the exhibition depict history, drama, comedy, fantasy, and adventure from the 1500s to the 1900s through costumes worn by such stars as Johnny Depp, Kate Winslet, Robert Downey Jr., Anjelica Huston, and many others.

According to MSV Adult Programs Coordinator Courtney Beach, Thursday’s program will detail the evolution of a costume from concept to finished product. During their illustrated talk, Yancey and Adams will discuss the aspects of costuming that are critical to the success of stage performances.

An award-winning costume designer with more than 25 years of experience teaching classes in costume and makeup, Cheryl Yancey is an associate professor of costume design at Shenandoah University. Prior to her tenure at SU, she was the resident costume designer for Allentown College, Pennsylvania, and the Pennsylvania Shakespeare Festival. During her career she has designed and constructed costumes for more than 200 productions including Beauty and Beast, Cats, Shrek!: The Musical, The Wizard of Oz, My Fair Lady, The King and I, The Cherry Orchard, and 1776. Cheryl Yancey has been awarded three American College Theatre awards for her costume designs in Flea in Her Ear, A Man for All Seasons, and The Cherry Orchard.

A costume designer with more than 20 years of experience, Jennifer Adams has designed and taught at Shenandoah University, Winchester, Virginia, as an Associate Professor of Theatre/Costume Design since 1999. Along with serving as the resident costume designer at the Allenberry Playhouse in Boiling Springs, Pennsylvania, for two years, Adams has worked extensively in regional theatre providing design and technical work for the Maryland Ensemble Theatre (Frederick, Maryland), the Totempole Playhouse (Fayetteville, Pennsylvania), and the Pennsylvania Shakespeare Festival (DeSales University, Pennsylvania).

Admission to Thursday’s program—which includes evening admission to CUT! Costume and the Cinema and the lecture—is $5 or MSV Members or $12 for all others. Admission is free to SU students and faculty (with ID). As limited seating for the program is first-come, first-served, those interested in attending are encouraged to pre-register at www.theMSV.org or by calling 540-662-1473, ext. 240. Tickets for the program will also be available at the door.

A regional cultural center, the MSV is located at 901 Amherst Street in Winchester, Virginia. The MSV complex—which includes galleries, the Glen Burnie House, and seven acres of gardens—is open Tuesday through Sunday from 10 a.m. until 4 p.m. The MSV galleries are open year-round; the house and gardens are open April through October. Additional information is available at www.theMSV.org or by calling 540-662-1473, ext. 235. –END–

About CUT! Costume and the Cinema

On view for the first time in the mid-Atlantic region during its MSV display, CUT! Costume and the Cinema takes an in-depth look at the art of making costumes that set the scene and establish authenticity in period films.  Featuring 43 costumes depicting five centuries of style, the exhibition will be on view through February 28, 2016. Films represented in the exhibition depict history, drama, comedy, fantasy, and adventure from the 1500s to the 1900s through costumes worn by such film stars as Johnny Depp, Kate Winslet, Heath Ledger, Emma Thompson, Robert Downey Jr., Anjelica Huston, and many others. In all, more than 30 actors and 25 films will are represented, including Pirates of the Caribbean, Sense and Sensibility, The New World, Gosford Park, Sherlock Holmes, and The Phantom of the Opera. CUT! is organized by Exhibits Development Group, USA in cooperation with Cosprop, Ltd., London, England. The MSV display is sponsored by the Alamo Drafthouse Winchester and Shenandoah Country Q102.