Edward Caledon Bruce: A Deaf Artist in the Shenandoah Valley

September marks International Deaf Awareness Month, the purpose of which is to increase public awareness of deaf issues, people, and culture.

Celebrations take place worldwide, culminating in the International Week of the Deaf (abbreviated IWDeaf) during the last full week of September. Deaf Awareness Month comes with a charge: that we inform ourselves about the challenges and achievements of deaf Americans in our collective past, so that we can better understand and support Deaf culture and people in the United States today.i

To that end, this month I would like to highlight the story of a deaf artist strongly represented in the MSV Collection. Edward Caledon Bruce (1825-1900) was a Winchester native and one of the Shenandoah Valley’s most talented native painters. Over the course of his lifetime, he produced more than seventy paintings—mostly portraits—that survive today in museum and private collections. Seven of those paintings now reside in the MSV Collection, a few of which are illustrated here.

Edward Bruce is an example of an artist with acquired deafness. He was not born deaf, but became deaf due to complications from scarlet fever that nearly killed him when he was 13 or 14 years old. Ironically, this was about the same time that he started to show a penchant for painting. Family lore claims that Bruce began copying ancestral portraits for relatives in his early teens.

Bruce came of age in an era when Deaf culture and education in America were still in their infancies, particularly in the South.ii The first school for the deaf in the United States actually was located in Virginia—the Cobb school near Goochland—but it closed just over a year later due to poor management. The majority of early, disability-specific institutions were concentrated in New England, like the Connecticut Asylum for the Education of Deaf and Dumb Persons founded in 1817 in Hartford.

Those few elite Southern families that were wealthy enough to send their disabled children north—like the slaveholding Bruces—might have hesitated to do so; abolitionist sentiment and education often overlapped in New England schools.iii

Faced with limited, disability-specific educational opportunities in their regions, the lives and experiences of disabled Southerners varied greatly according to their resources.iv Bruce was exceptionally privileged in that he came from a highly-educated family with strong social and economic networks. His father—John Bruce (1795-1855)—was a Scottish-born builder and educator. His mother—Sidney Smith (1794-1874)—came from a wealthy Tidewater planter family that had relocated to the fertile Shenandoah Valley. Some of these connections no doubt aided Bruce in his desire to become a painter.

According to his own recollections, in his late teens Bruce travelled to Philadelphia to study with the greatest American portraitist of the 1800s, Thomas Sully (1783-1872). Unfortunately, Bruce does not appear in Sully’s extensive surviving diaries.v However, the brushwork, poses, and palette Bruce used throughout his career suggest that he did train with Sully and/or Sully’s son-in-law John Neagle (1796-1865). At the very least, Bruce had access to original artworks by one or both artists.

Portrait painting became not only Bruce’s primary occupation. It became a passion that helped him escape from the depression that followed his hearing loss. At twenty years old, Bruce wrote of his life and new career:

It was like another glimpse of the world to me—shut out for six years by the iron hand of sorrow…it is better to think to some purpose, and think to live instead of living to think. I have much to be thankful for, and in all that I have set my heart on my success has been encouraging…thank God I have my sight yet—all Nature can speak to me through that sense.vi

In some ways, Bruce’s portraiture differed from that of artists deaf and/or mute from birth like John Brewster, Jr. (1766-1854) of Connecticut and English miniature painter Richard Crosse (1742-1810). For those born deaf, facial cues and direct eye contact are essential components to visual communication. Correspondingly, artists like Brewster and Crosse frequently painted subjects with piercing, steady gazes. Many of the former’s portraits of young children continue the visual dialogue between subject and viewer through the choice of standing, forward-facing poses.vii

Bruce, by contrast, was part of the hearing world for the first thirteen or fourteen years of his life. He adapted to visual communication over time and by necessity, rather than having been raised with it. The artist’s surviving paintings parallel that evolution.

Bruce’s early portraits reflect his training with a hearing artist in Thomas Sully. Taking after his mentor, Bruce initially depicted his sitters in a variety of poses using a mix of direct, semi-direct, and distant gazes.

But over the decades that followed—from the 1850s through the early 1860s—Bruce increasingly painted sitters straight-on with direct gazes. A good example is his early 1860s portrait of Thomas Glass of Rose Hill, the great-grandfather of MSV benefactor Julian Wood Glass Jr. (1910-1992).

In part, Bruce likely was responding to changes in how he increasingly interacted with the world around him. Good business sense and convenience, though, might have also played roles. Over the same two decades, increased accessibility to early photography led many prospective clients to prefer straight-facing, documentary poses over other options. Artists also increasingly painted portraits from photographs provided by the subjects themselves.

Edward Bruce continued to paint until shortly before his death in 1900. His last dated painting—a portrait of Chief Justice John Marshall after an original by Cephas Thompson (American, 1775-1856)—recalls some of his earliest copy work.

Bruce passed away at the dawn of a new century, in a country very different from the one in which he grew up. Multiple educational institutions for the deaf now existed throughout the country, including the Virginia School for the Deaf and the Blind founded in Staunton in 1839. The railroad system built (and in some cases rebuilt) following the Civil War likewise removed the obstacle of physical distance for many deaf prospective students.

That’s not to say that disabled Americans did not continue to face challenges after 1900. They certainly did and continue to battle prejudice and ableist notions today. Edward Caledon Bruce’s story and the paintings he left behind are just one window into disability history from which we can learn. Many others resources are just a click or swipe away, like The Disability History Association podcast. Additionally, be sure to check out the endnotes of this post for select readings on disability history and art in America.

i Deaf with a capital “D” refers to people who identify as culturally Deaf, actively engage with the Deaf community, and adhere to the norms, beliefs, and values that they hold. Deaf with a lowercase “d” refers to the medical condition of having hearing loss. 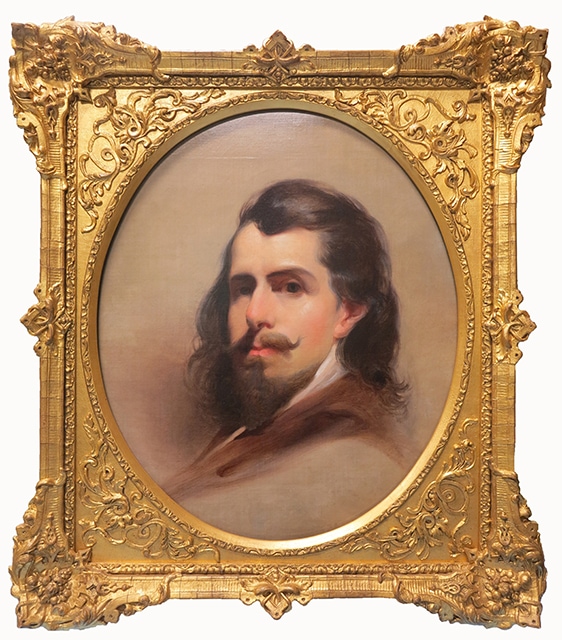 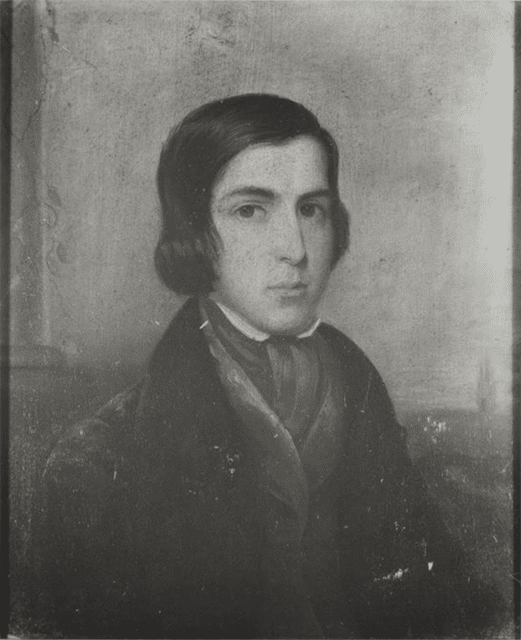 Portrait of Edward Caledon Bruce (1825-1900) by Henry M. “Lame Henry” Baker (American, 1810-1874). Signed on back: “Edward C. Bruce at 17 / Taken by H. Baker 1842.” Oil on board. Illustrated in Laura MacMillan for the National Society of the Colonial Dames of America in the State of North Carolina, The North Carolina Portrait Index 1700-1860 (Chapel Hill, NC: The University of North Carolina Press, 1963), 37. This portrait by a Winchester area artist depicts Bruce just a couple of years following his hearing loss. 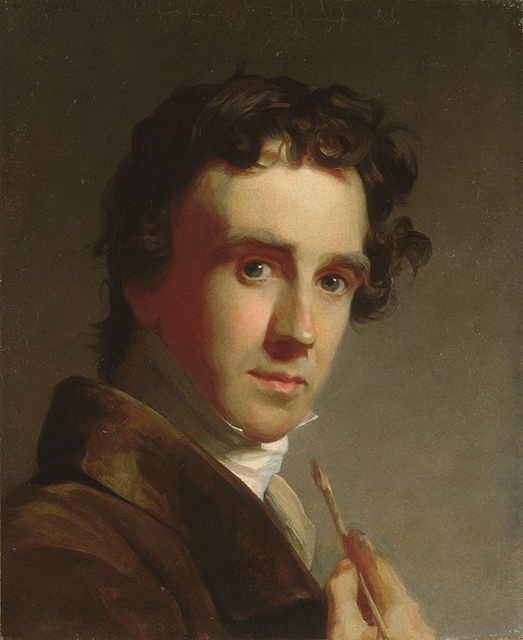 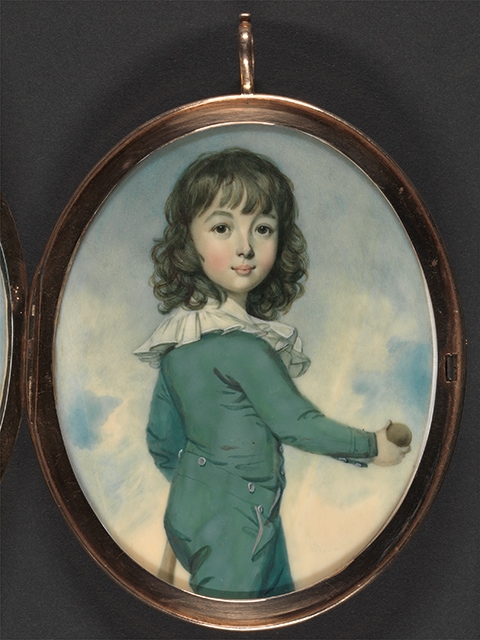 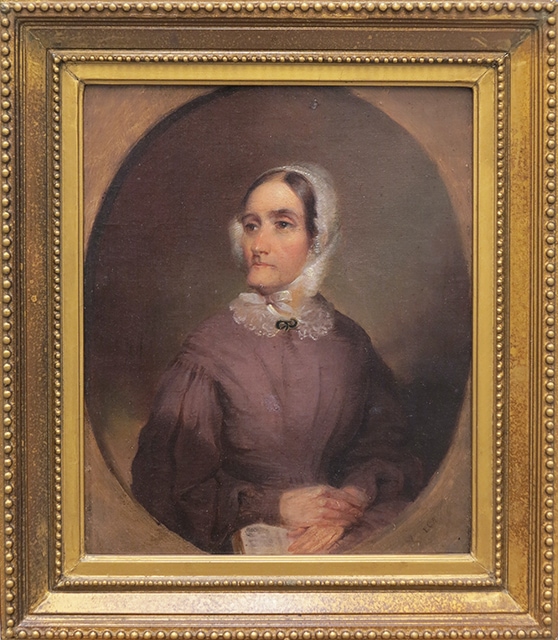 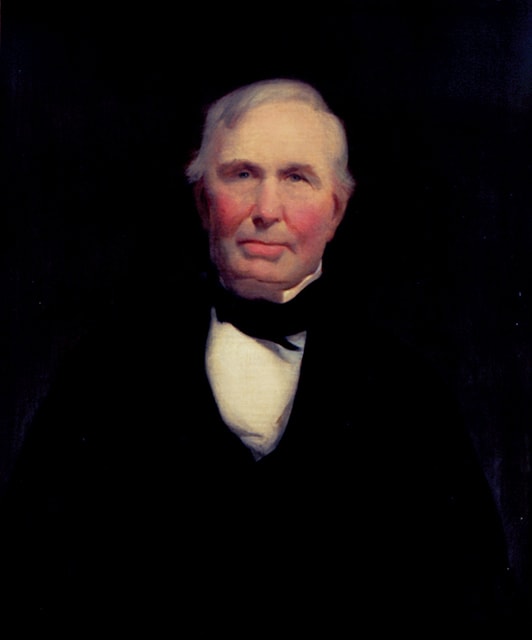 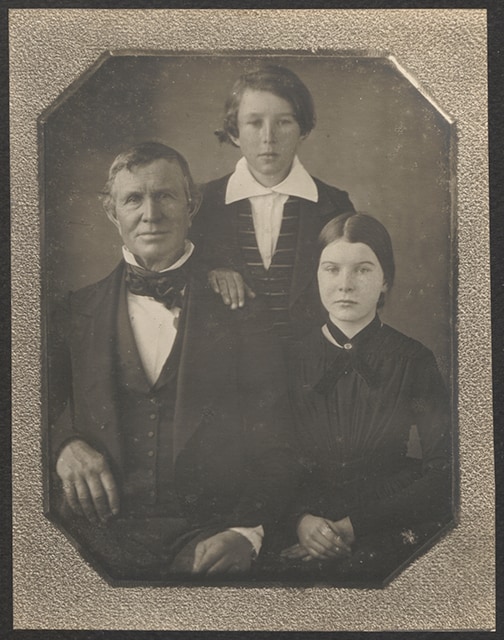