We are reminded about the march of time as the calendar page flips once more to 2016. Gardeners often measure their garden time by the seasons. We use that cycle to mark progress in the garden, to keep the rhythm of a year. But gardens have longer cycles, too. Gardens are conceived in idea, installed, and grown. They mature and—yes—gardens even decline. Sometimes this cycle lasts decades, but often it can complete itself in the space of a few years. Gardens need constant renewal. Julian Glass and Lee Taylor saw this several times in this garden and were only too happy to reinvent a space when that natural cycle came to an end. It is a tradition we still carry on today. The Grand Allée is a prime example. 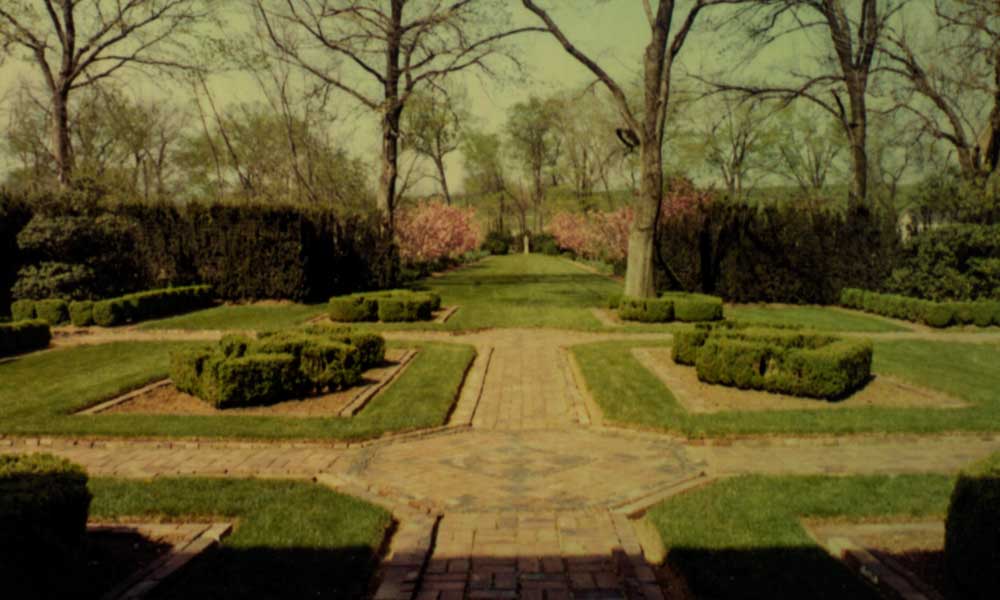 Grand Allée of cherry trees in 1969

The allée began in 1961 as a feature along the central axis of the house leading towards the family cemetery. Two rows of Japanese cherries (photos look a little blurry, but they look like Kwanzan cherries) flanked a central allée of turf. Early photos show the trees were initially about eight feet tall, so not so grand, but that is how gardens look in their beginning. While some trees grew vigorously, others proved prone to disease and within a decade several had died and replacements were found. However, a formal allée relies upon the uniformity of the plantings and this had been lost. So in 1974, the cherries were replaced with eight foot tall crabapples. One cycle of the Grand Allée had ended and a new one had begun. 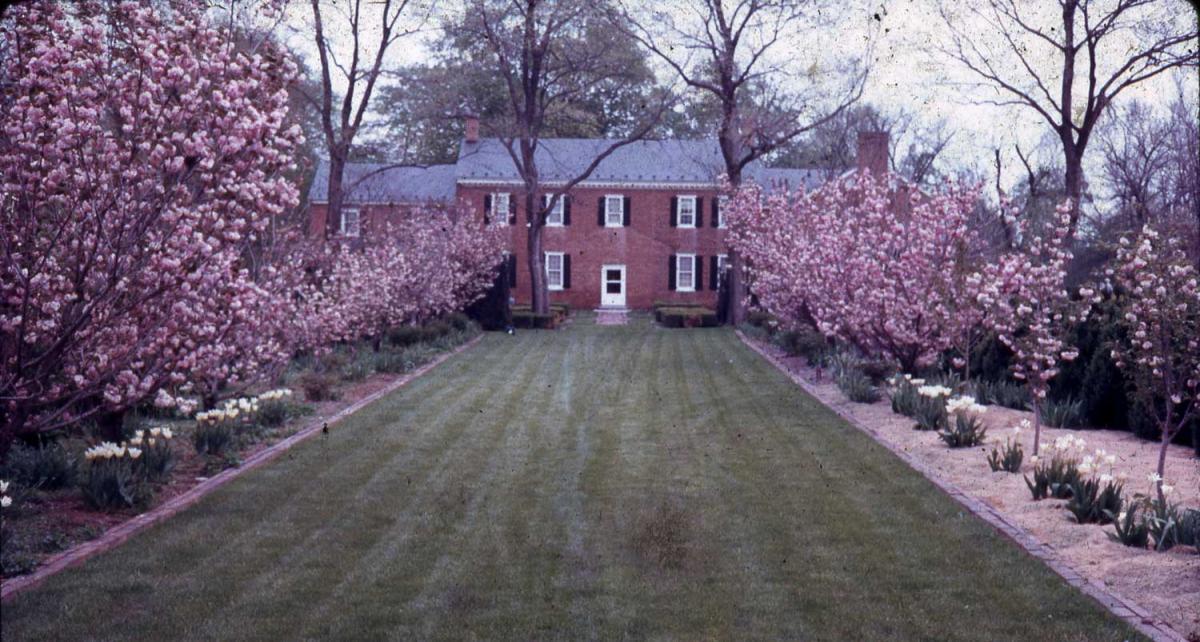 The crabapples flourished. In between these small trees were plantings of irises and peonies to add to the floral display. However, as the trees grew in size, they shaded out the sun-loving flowers beneath. The flowers were removed. Within twenty years, the allée had indeed become grand, with 25 feet tall trees sparkling in pink flowers each spring and providing a rich shade during the summer. 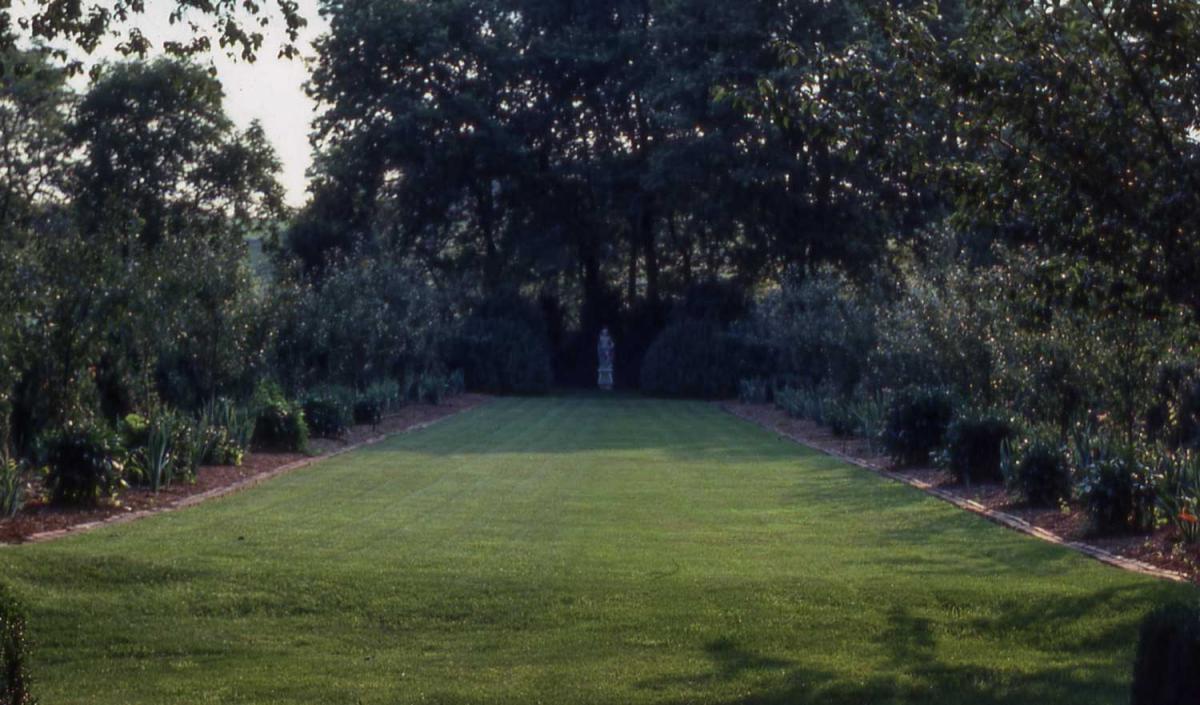 Crabapples in the Grand Allee in 1976, two years after planting

But in the last few years, this second version of the Grand Allée has been coming to its own end. Crabapples generally have a life span of 30-50 years. Two trees in the Grand Allée had already died and been removed. Several more were showing serious signs of trouble and would need removal soon. We relied on a vigorous regimen of pesticide sprays just to keep others in moderate shape. The period of uniform rows of glorious trees was clearly at an end and we would be facing a similar situation as Julian and Lee did in the early 1970s—replant and lose the important uniformity or start all over again. Time to start the cycle anew.

Grand Allée in 2014. Note the missing tree on the left

In October, we took the painful steps and cut down the trees and grubbed out the stumps. To carry on the tradition of crabapples, a new variety, ‘Centurion,’ was selected. These crabapples are pink like the previous trees were, but the foliage has more of a purple tinge and the trees themselves will be slightly narrower and more upright than their predecessors. They are more disease resistant, so we should be spraying them less. We were able to purchase 26 plants that were approximately 12 feet tall so they will not be quite as small as we start the third iteration of the Grand Allée. While planting the trees we maintained the trick of the forced perspective of the allée with the rows wider at the house than at the far end of the allée. We also enhanced this trick by spacing the trees within the row slightly closer to each other as you move down the allée towards the cemetery.

Removing trees from the Grand Allée 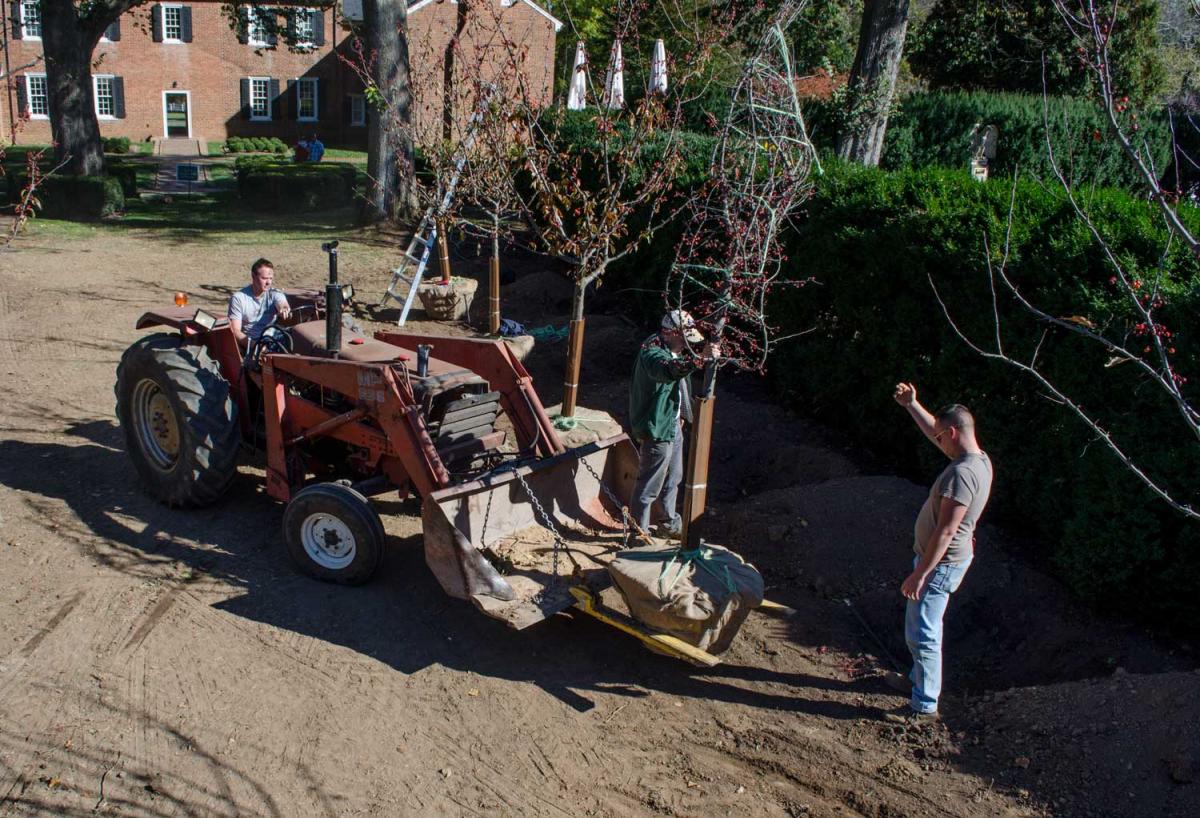 Delivery of new trees for the Grand Allée 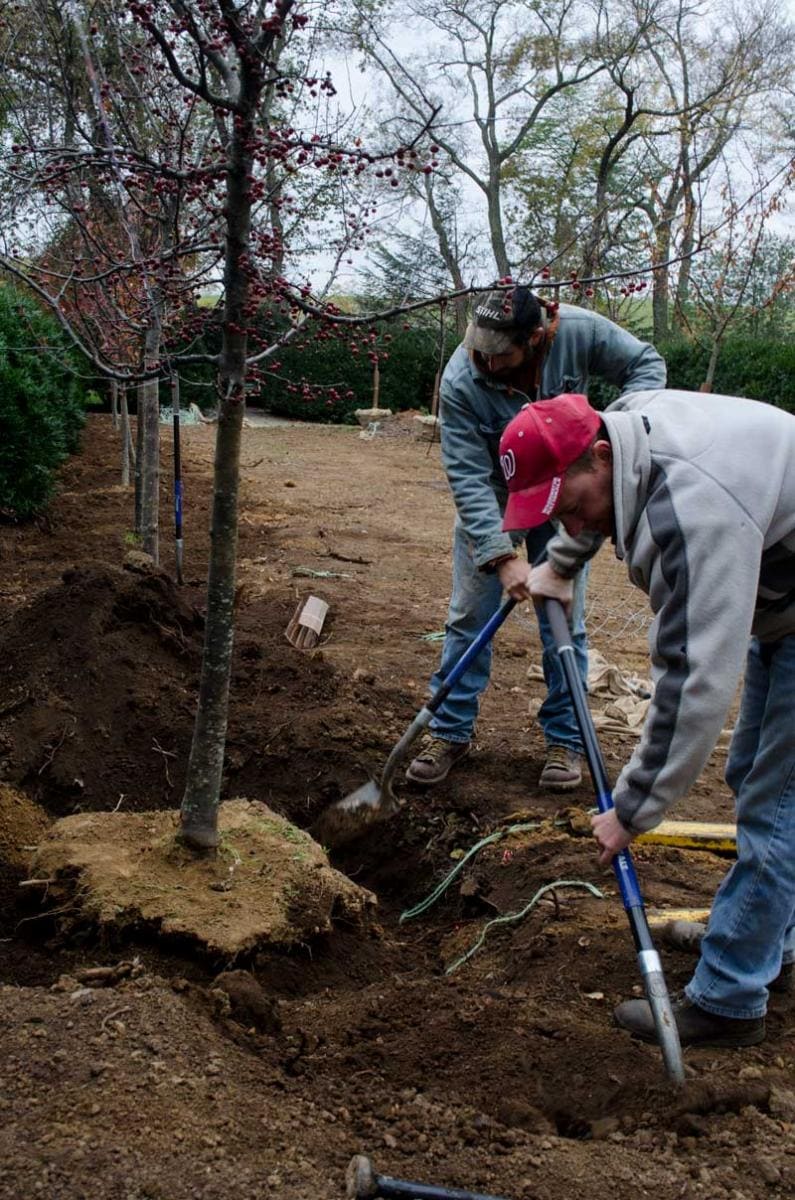 Planting a crabapple in the Grand Allee

During this process, we had the opportunity to fix another problem that had developed in the last decade. With the garden open to the public, years of heavy foot traffic on the turf had compacted the soil and created a small depression down the center of the allée. After replanting the trees we were able to regrade the soil and re-establish the turf as it was meant to be.

Adjusting the grade in the Grand Allée

So next spring, come see our new Allée. It should be grand for many years to come.

The Grand Allée renovation was made possible by Beverley and Steven Shoemaker and the James L. and Mary Jane Bowman Charitable Trust.