Creative by Nature: The Art of Robert L. Cross 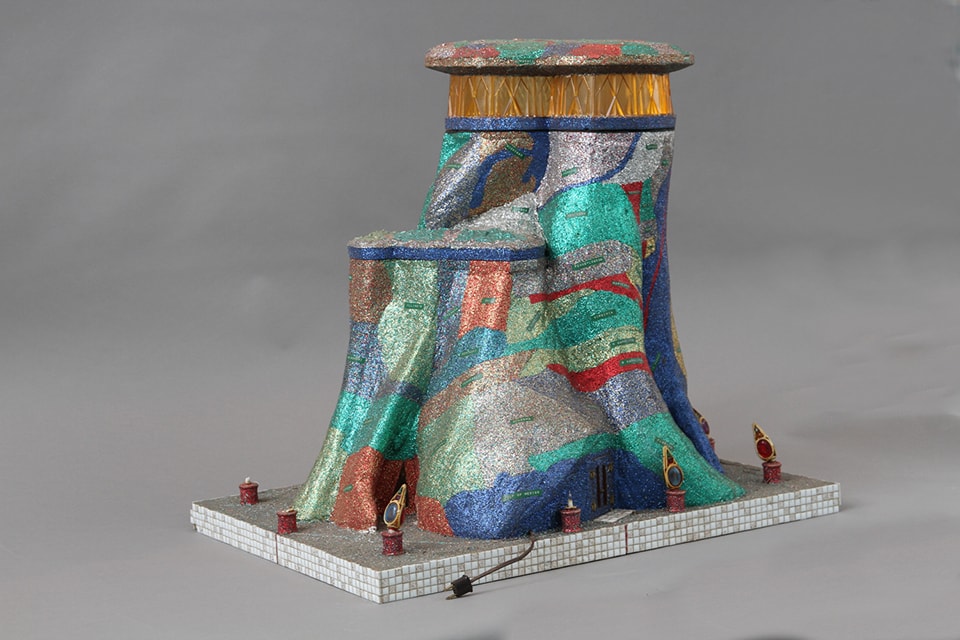 A one-of-a-kind piece of Valley folk art from the MSV Collection is an honoree  in Virginia’s Top 10 Endangered Artifacts Competition. Online voting for the competition is taking place through midnight on January 31. Learn the about artist Robert Cross and vote for the MSV!

Scroll to the bottom of the page for instructions on how to vote for the MSV.

Starting out the New Year with a bang, the MSV is once again honored to be included as part of the Virginia Association of Museums’ Top 10 Endangered Artifacts competition. Museums and cultural institutions across the Commonwealth and the District of Columbia draw from their collections to highlight objects in need of conservation and repair. Since its inception in 2011, over 160 organizations—including the MSV—have benefited from participating.

This year, the MSV has nominated a brand-new acquisition: a unique Stump Map depicting the 50 states by African American folk artist Robert Cross. The Stump Map is one of twelve sculptural miniatures Cross made during a relatively short period from the mid-1950s until 1974, and is the seventh example to enter the MSV Collection. 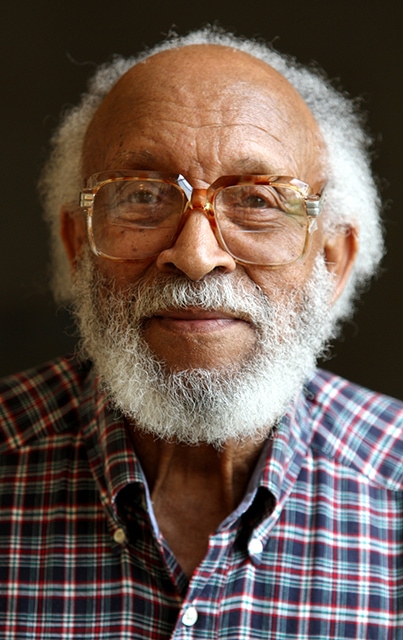 Robert Cross grew up in Clarke County on a multi-generational farm in Webbtown, a community settled by former slaves following the Civil War. As a child, Cross enjoyed making things with his hands, like birdhouses and small wagons. To complete his early creations, Cross frequently “borrowed” tools and materials like nails from his father’s farm supplies.

Cross’s years on the family farm—coupled with time spent as a young man working in orchards and at a local brickyard—cultivated a fascination with natural and man-made materials that would manifest in his art years later. 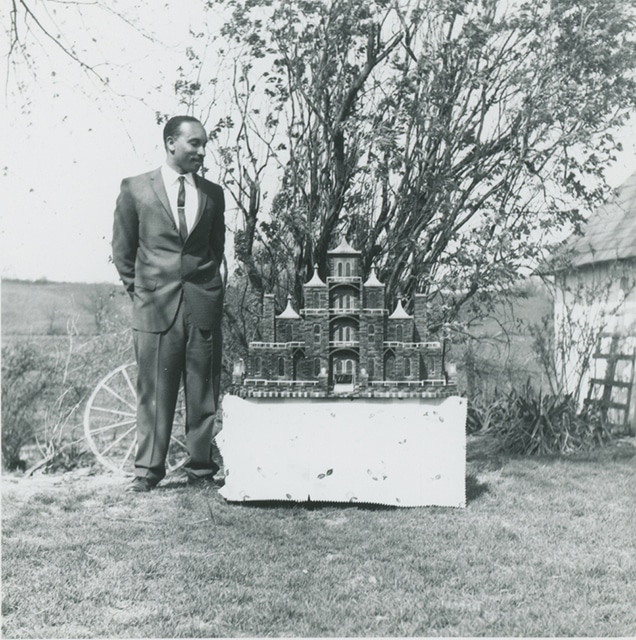 Following stateside service during the Korean War, Cross relocated to nearby Winchester to work for the Shenandoah Valley Bank on Piccadilly Street. He soon settled into a house on North Cameron Street, the kitchen of which became the studio for his sculptures. Cross has recalled that each sculpture took between six months and a year or more to complete. Recycled materials became a hallmark of his work. Slowly people in the community became aware of Cross’s hobby, and when they did, many offered materials and/or their services (like glass-cutting) for free. 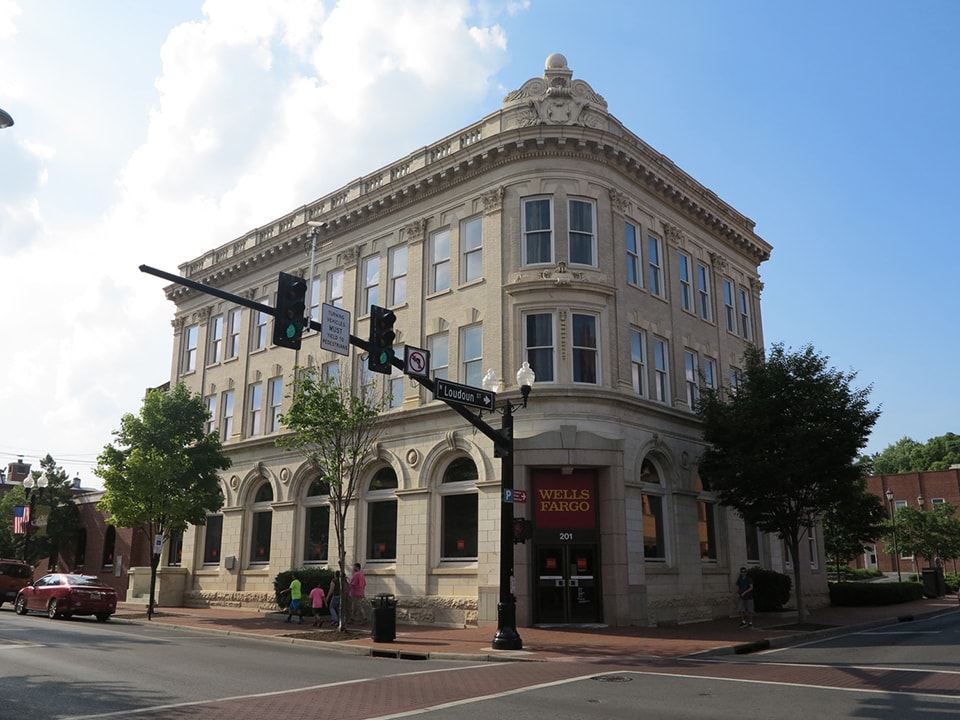 Fig 4. Former site of the Shenandoah Valley Bank, Robert Cross’s place of employment from the 1950s until the bank changed hands in 1973. Now the site of Wells Fargo Bank Old Town. Photo by the author.

The Shenandoah Valley Bank immediately proved to a be a useful source of scrap and recycled material for Cross’s artwork. For example, the roof of the “Rock House” pictured below includes shredded checks mixed with Sears packing materials to make a papier-mâché that Cross then dyed with food coloring. Repurposed plastic Christmas ornaments—a frequent component of Cross’s pieces—serve as crenellations along the roof and also border the base. 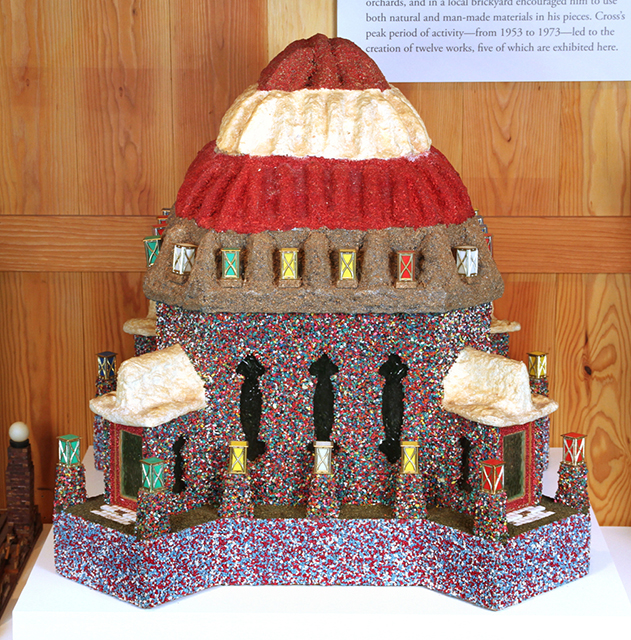 Many of Cross’s earliest works—like the castle shown below—incorporate pieces of scrap wood recovered from the shop floor of the Henkel Harris Furniture Company. Now the site of Dominion Motors, Henkel Harris’s first location on North Loudoun Street conveniently sat on the lot directly behind the artist’s home.

At the end of each work day, Cross rushed home and took what wooden floor scraps he wanted before the “match man,” as he called him, burned them. Consequently, sculptures like the castle reflect the woods used in Henkel Harris’s production line at the time, including mahogany, walnut, cherry, and yellow pine. 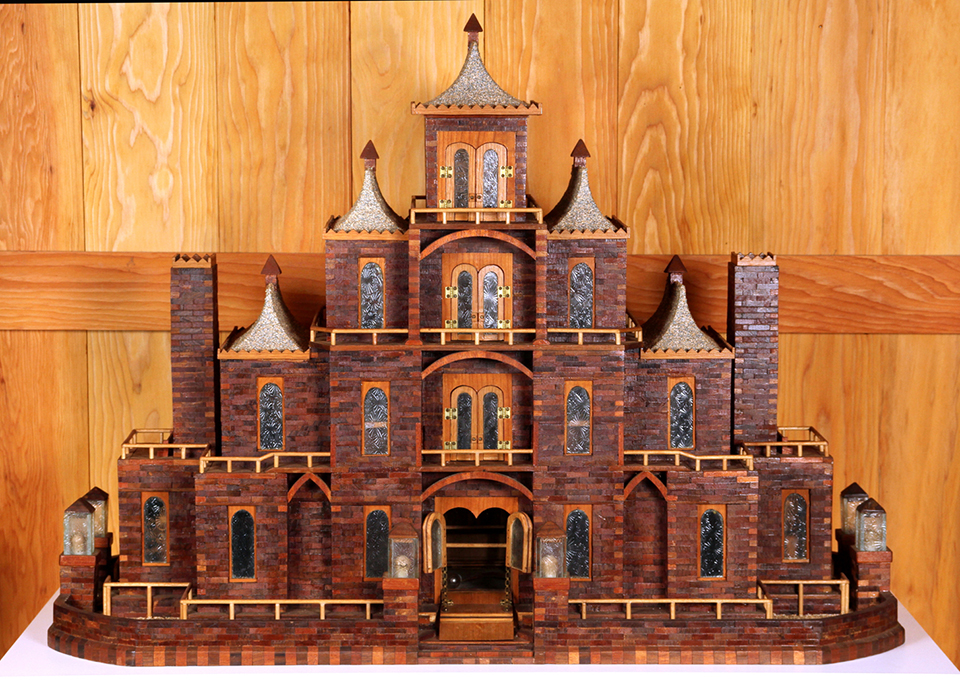 My personal favorite Robert Cross sculpture is a cathedral that utilizes Henkel Harris woods, but also includes a family heirloom. Set in the clock tower of the cathedral is a gold-plated pocket watch originally owned by Cross’s paternal grandfather William Cross (1845-1938). 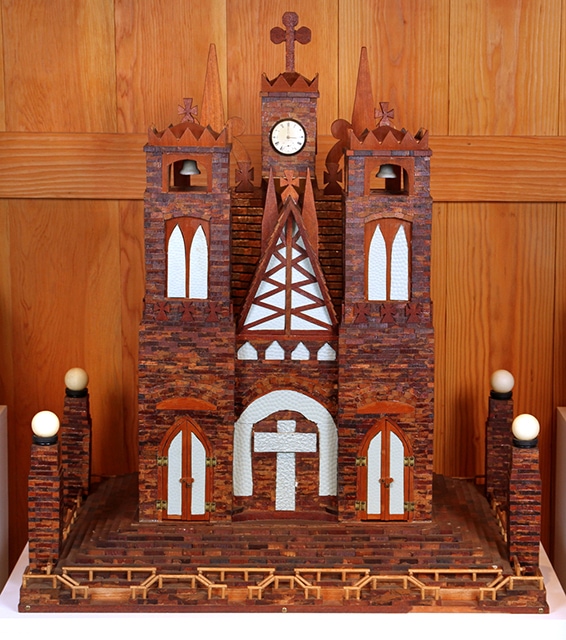 The watch then passed down in the male line to the artist, who made it a central feature of the cathedral’s design. William was an early influence in his grandson’s life, telling young Robert stories of when buffalo could still be found roaming the Shenandoah Valley. 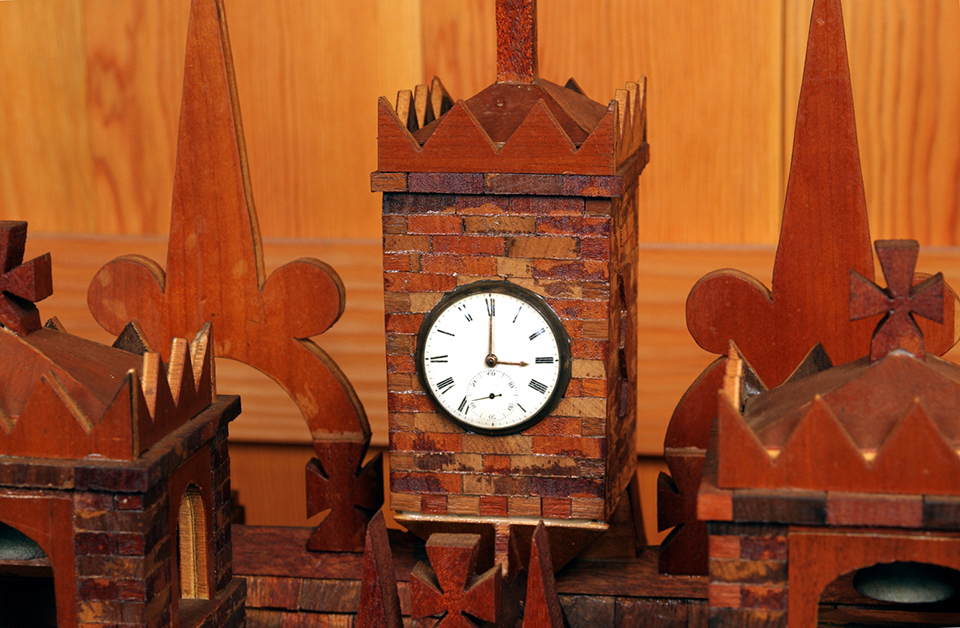 Fig 8. Detail of the pocket watch owned by William Cross (1845-1938) inset into the cathedral sculpture illustrated in Figure 7. Photo by Rick Foster.

Occasionally, Robert Cross returned to the family farm in Webbtown to look for materials to use in his art. He found what he was looking for in two locust stumps. One stump became the core for the Stump Map, while the other became the foundation for a “Tree House” sculpture, also in the MSV Collection. 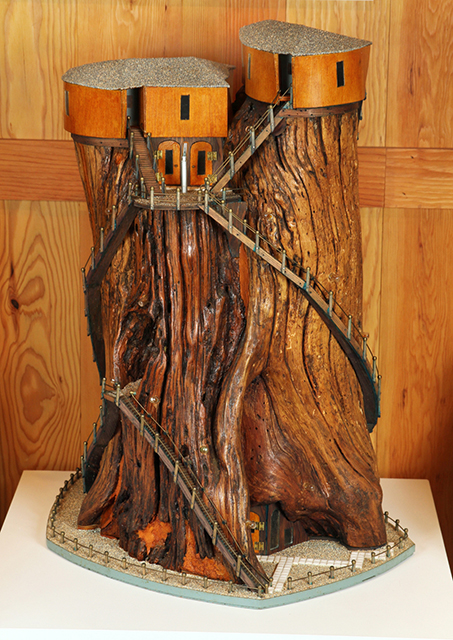 Because locust is an extremely dense wood and thus difficult to work, Cross purposefully looked for stumps that had already been hollowed out by termites. Of the termites, Cross recalls: “We all worked together. They helped me on the inside and I did my work on the outside.” I once asked Cross if he had made sure that all of the termites had left the stumps before bringing them into his house. His reply? No, but he probably should have!

On both stump sculptures, Cross ingeniously used the contours of the wood to his advantage. Small openings in the bark became opportunities for fully-movable windows and doors. A large branch shoot and the top of the trunk on the Stump Map became the locations for the states of Alaska and Hawaii, which do not touch the U.S. mainland. One of the deepest crevices in the wood became the spot in which the two sides of the map converge, marked by a red line dividing the Atlantic and Pacific Oceans. 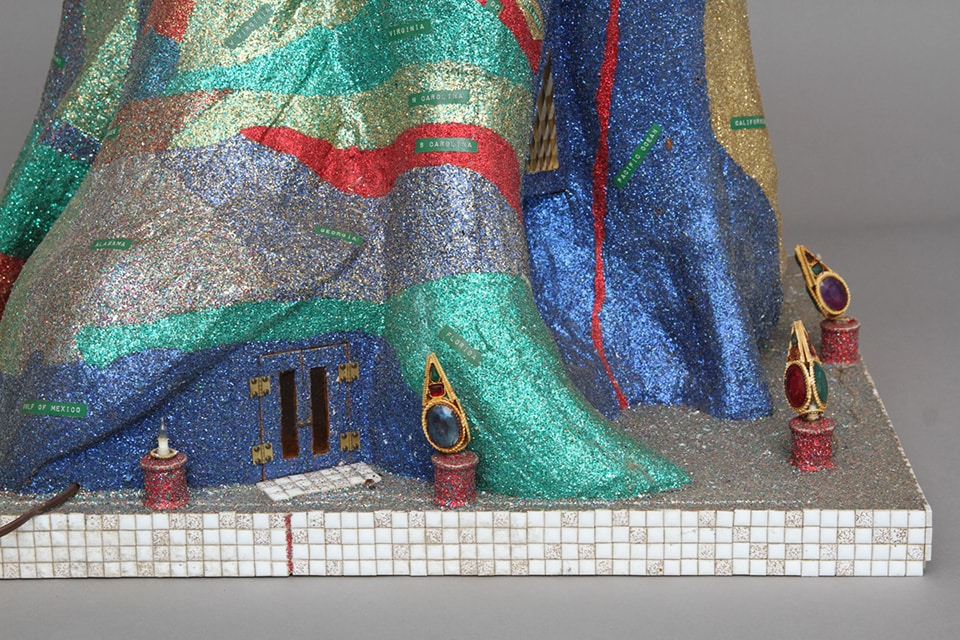 Fig 10. Detail of the Stump Map illustrated in Figure 1 highlighting the red line that stitches together the two sides of the map. Photo by Rick Foster.

Robert Cross’s sculptures are notable for their creative and colorful designs, use of reclaimed materials, and the relatively short time span in which he made them. The materials Cross chose tell stories, revealing his connections to people, places, and businesses within the Valley community. But one of Robert Cross’s pieces needs your help! 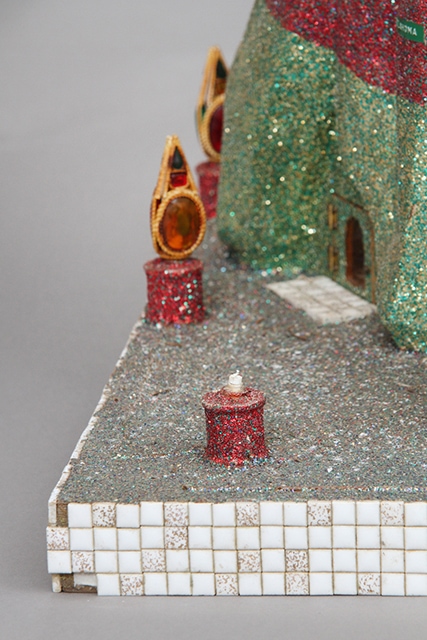 Unfortunately, over time the Stump Map has suffered damage. The most noticeable damage is the complete loss of five of the ten Christmas ornaments used to border the edges of the base.

Fig 11. Detail of the Stump Map illustrated in Figure 1 highlighting the loss of Christmas ornaments around the base. Photo by Rick Foster. 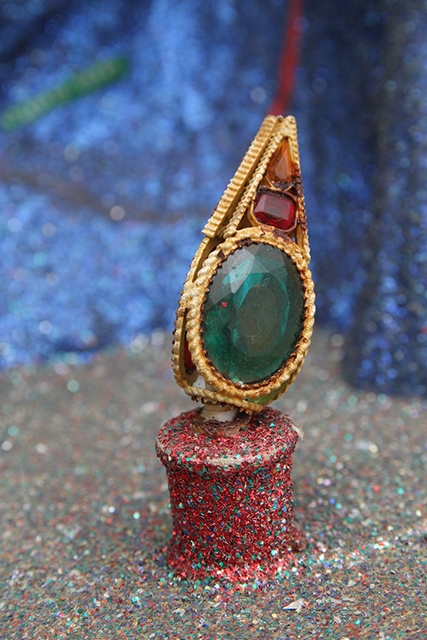 Other, surviving ornamental lights have tipped sideways from their original upright positions. Conservators will carefully correct them.

Wrapping around the base are bands of small, Formica tiles. Numerous tiles have detached, and while some have been saved, others will need to be duplicated and replaced. 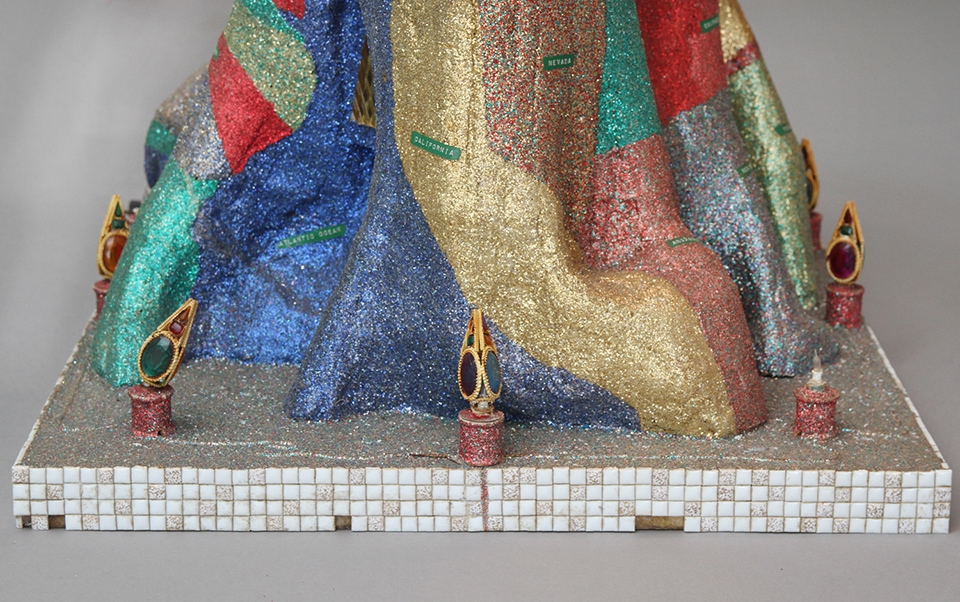 You can make the difference in conserving Robert Cross’s Stump Map by voting for it online through the Virginia Association of Museums’ website. Voting will be open from January 22nd through January 31st, 2019. The top two artifacts receiving the most votes will be recognized as the People’s Choice Awards and receive $4,000 and $3,000 respectively for their conservation and continued care. Vote early, vote often throughout the week, and help us spread the word through social media!

The Stump Map will be on view in the MSV Gallery Lobby for the duration of the voting period. While you are here, make sure to visit Robert Cross’s other work in the upcoming Art is a Vital Force exhibition, which highlights contemporary art in the MSV Collection (opens February 9, 2019).

INSTRUCTIONS ON HOW TO VOTE FOR FOR THE MSV: