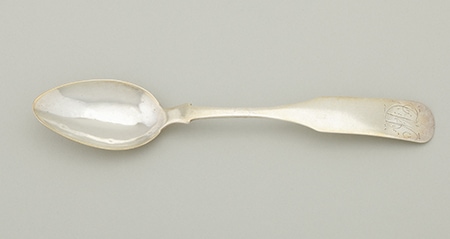 Get a close look at metals made and used in the Shenandoah Valley with a preview of some new discoveries related to silver pieces from the Julian Wood Glass Jr. Collection.

This month, we will take a close look at metals made and used in the Shenandoah Valley with a preview of some new discoveries related to silver pieces from the Julian Wood Glass Jr. Collection. The MSV has been collecting rare examples of Valley silver since 2005. But the pieces of flat and hollowware that descended directly to museum benefactor Julian Wood Glass Jr. (1910-1992) remain some of the best documented in the MSV collection. 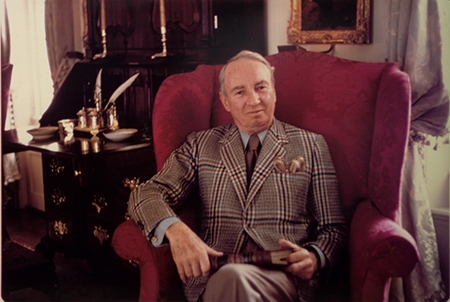 For example, a pair of beakers made by Philadelphia silversmith Joseph Richardson almost certainly date to the 1774 marriage of Robert Wood (1747-1806) and Comfort Welsh (1751-1840)—the future builders of Glen Burnie and Julian’s great-great grandparents. Richardson engraved Robert’s initials—“RW”—onto the bodies of both beakers. 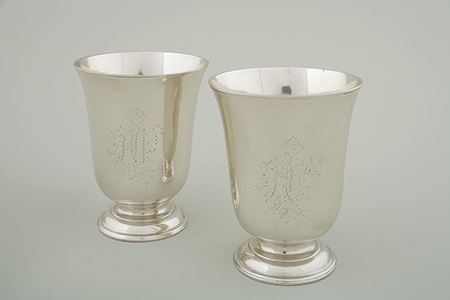 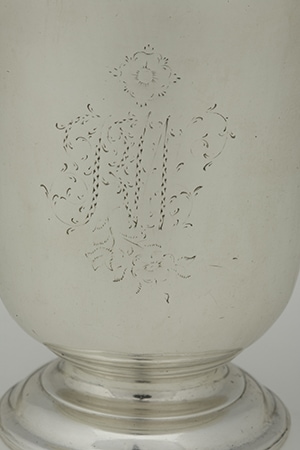 Fig 3. Detail of the engraved initials on one of the beakers illustrated in Fig 2. Photo by Ron Blunt.

Very rarely, though, do we get a glimpse into the mechanics of commissioning silver from a silversmith. The discovery of several receipts in the Wood family papers at the Stewart Bell Jr. Archives in Winchester expand the story of surviving silver owned by Comfort Welsh Wood in the 1810s.

The story begins with Robert Wood’s death in late 1806. Robert left behind an estate valued at over four-thousand dollars, one of the wealthiest households in Frederick County at that time. Comfort outlived her husband by thirty-four years and never remarried. This means the task of running the Glen Burnie property fell to her (with help from her children). For a wealthy widow of this period, managing a successful estate included not only running the day to day affairs of the farm. It also required maintaining a smart social life. 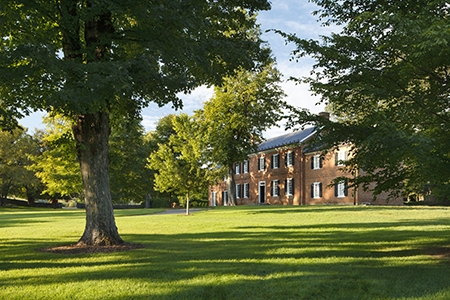 Comfort turned to the fashionable silversmiths of Winchester in her search for sociability. Over the course of a decade, she purchased numerous pieces of silver flatware that aided in both dining and serving tea. Her first stop was to the firm of Daniel Hartman and William Phillips (active 1802-1816) in 1810. On October 3rd, Comfort paid for two table spoons, valued at one pound sterling apiece. 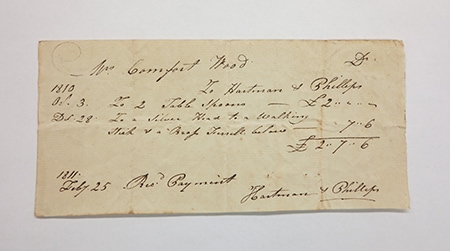 Later in the same month, Comfort – identified as “Mrs. Wood” – ordered “1 Set of Table Spoons” at a charge of six pounds. Based on evidence from the earlier receipt, this charge probably equaled six spoons. Even at this late date – when the United States was over twenty-five years old – craftsmen and their patrons used English pounds sterling and American dollars interchangeably. 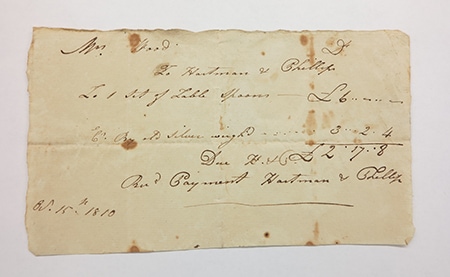 Comfort offset the cost of her second order of spoons by providing Hartman & Phillips with three pounds, two shillings, and four pence worth of “old Silver weight.” American purchasers frequently turned in outdated pieces of silver to be melted down and remade into newer, more fashionable forms. Comfort might have turned in some of the silver that appeared in Robert Wood’s estate when he died in 1806: six table spoons, one soup spoon, and a dozen tea spoons. Unfortunately, this recycling practice had the adverse effect that very few early pieces of Valley silver survive today.

Seven of the spoons Comfort purchased from Hartman & Phillips survive in the MSV collection. Each spoon bears a single maker’s mark reading “H&P” representing the two silversmiths. The craftsmen also engraved Comfort’s initials—“CW”—on the handle of each spoon. 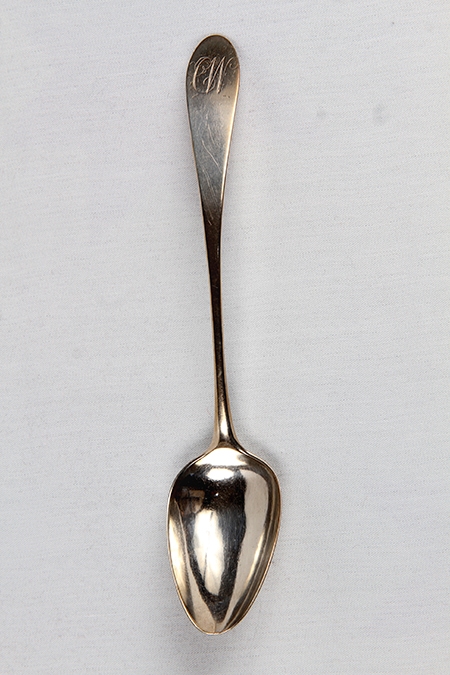 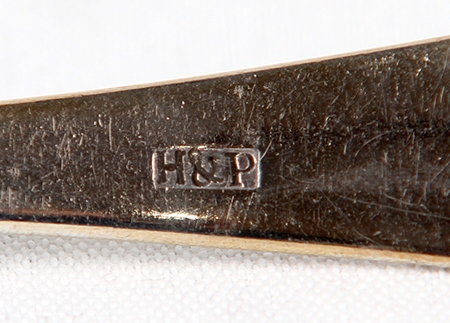 Fig 8. Detail of the mark on the spoon illustrated in Fig 7. Photo by Rick Foster. 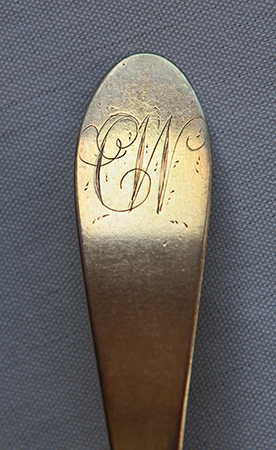 Fig 9. Detail of the engraved initials on the handle of the spoon illustrated in Fig 7. Photo by Rick Foster.

Silversmithing partnerships usually lasted only a few years. The Hartman & Phillips firm lasted longer than most at fifteen years on and off. But by 1820 – when Comfort again needed spoons made—she turned to the new partnership of William Phillips and John Foster (active 1817-1820). The Phillips & Foster firm operated from a one-story house on Loudoun Street formerly owned by silversmith William L. Campbell (1787-1815). Sometime in 1820, Comfort payed off the balance of $2.88 for spoons of unidentified size.

This order could possibly be a set of tea spoons that descended to Julian Wood Glass Jr. with the firm’s “P&F” mark and the engraved initials “CW”. Comfort Wood’s silver is unusual in that it carries the initials of a strong woman who after her husband’s death took on affairs that usually fell to men in the late 1700s and early 1800s. Many surviving examples of American engraved silver either bear the husband’s initialslike the earlier 1773 marriage beakers—or combines the couple’s initials into a single monogram. 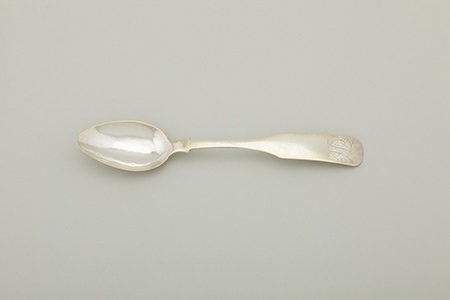 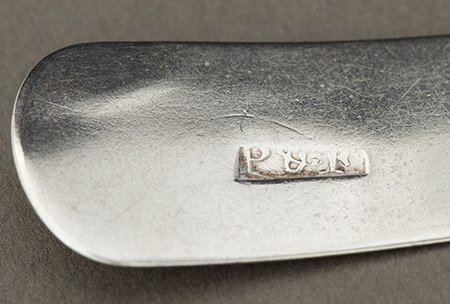 Fig 12. Detail of the mark on the spoon illustrated in Fig 11. Photo by Ron Blunt. 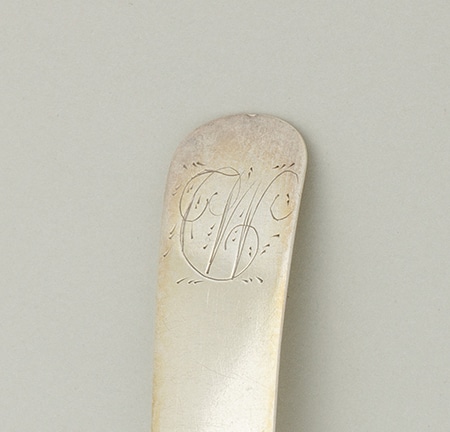 Fig 13. Detail of the engraved initials on the handle of the spoon illustrated in Fig 11. Photo by Ron Blunt

The rare group of accompanying receipts also offers insight into the many varied facets of the silversmith’s business. In addition to the objects they made, silversmiths also retailed metal objects and jewelry of all types. The “Brass Funnell” sold to Comfort in the first Hartman & Phillip receipt is a good example of something the partners probably did not make personally, but offered for sale in their shop. The “Silver Head to a Walking Stick” that made up the other half of the December 1810 charge could have been made by Hartman & Phillips or simply retailed by them. Unfortunately, neither object survives in the MSV collection today.

Finally, these receipts document some of the more mundane tasks that were an everyday part of a silversmith’s life. Repair work was a common need for many customers. In the same year that Phillips & Foster provided Comfort’s teaspoons, they also mended a ring for her. Only one ring from this period remains in the MSV collection: a mourning ring made to commemorate the death of someone in the Wood family. The ring’s gemstone is long gone, but its enameled setting remains. While perhaps not the example that the silversmiths repaired, it gives some idea of the style of ring Wood family members owned and preferred. 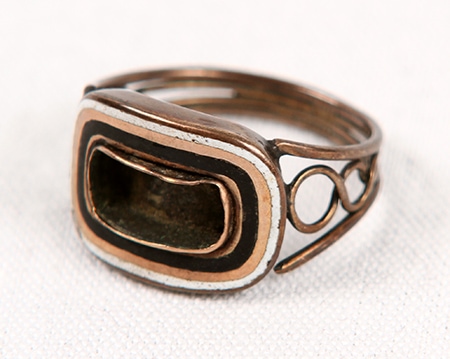 Researchers rarely can match surviving objects with original receipts. I look forward to sharing more “matches” with you in the future as I continue to explore Wood family documents preserved both in our archives at the MSV and at the Stewart Bell Jr. Archives.

Join MSV Curator of Collections Nick Powers on Thursday, June 8, 2–3 p.m., at the next Treasures from the Vault program that will feature weaving and basketry of the Shenandoah Valley.

All photos by Nick Powers unless otherwise specified.