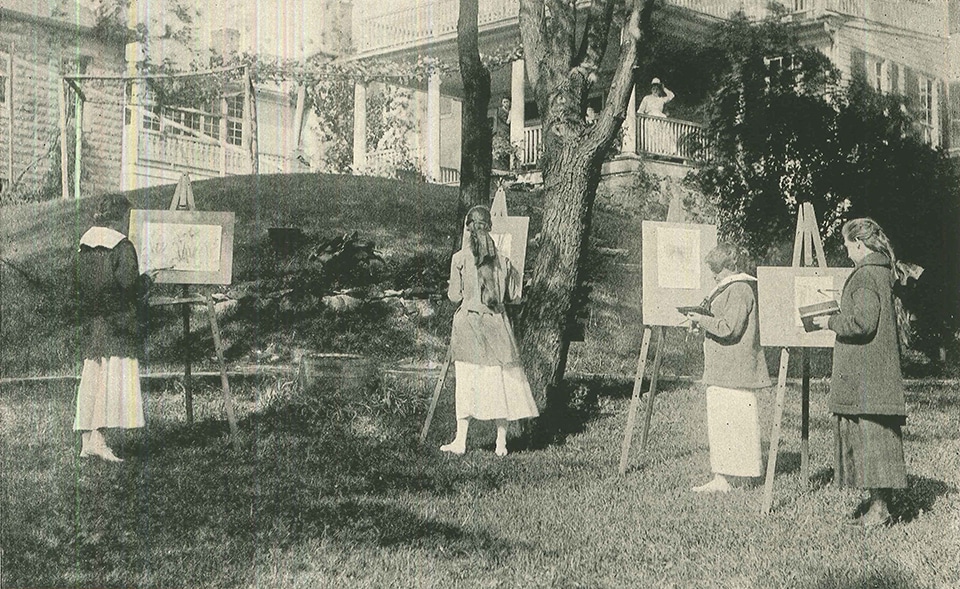 May 7 marks National Teacher Appreciation Day, an opportunity to celebrate and honor educators of all types who make lasting contributions to our communities. Teachers change the lives of millions of children every day, inspiring a lifelong love of learning and molding young minds in a positive direction.

To celebrate America’s teachers, this month I want to highlight a prominent figure in the MSV Collection: educator, historian, and author Katherine Rebecca “Kate” Glass Greene (1865-1948), the aunt of MSV benefactor Julian Wood Glass Jr. (1910-1992). For two decades—from 1905 until the school closed in 1925—Greene educated young women at the Fort Loudoun Seminary in Winchester. 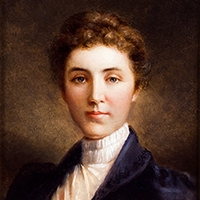 Born at Rose Hill only a few months after the Civil War concluded, Kate was the daughter of Colonel William Wood Glass (1835-1911) and his second wife, Nannie Rebecca Campbell (1842-1930).[i] Like other members of the Glass family, Kate Glass Greene was a direct descendant of Winchester founder James Wood (d. 1759). 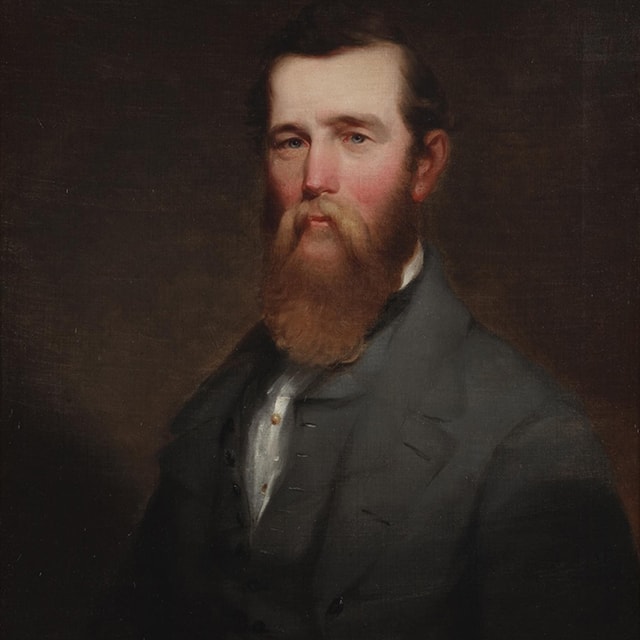 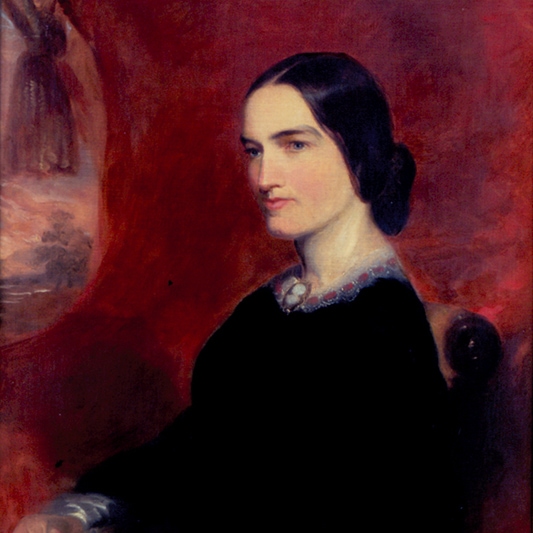 From an early age, Kate developed a passion for learning that likely influenced her decision later in life to open a female seminary. Her earliest documented education began at the Fairfax Hall girl’s school in Winchester (today’s 112 S. Cameron Street), opened by Rev. Silas Billings in 1869. As with many girls’ schools of the Victorian area, art education was a regular part of the curriculum for Fairfax Hall students. Kate graduated from Fairfax Hall in 1880, but ever the lifelong learner, she continued her studies with courses at Harvard University, Columbia University, Johns Hopkins University, and the University of Virginia.[ii] 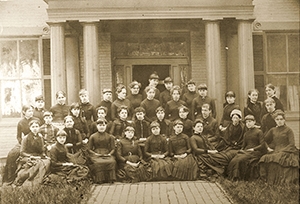 At some point—probably during her twenties—Kate took the “Grant Tour” of Europe. Where exactly she travelled in Europe is unknown, but a painting by Kate gifted to the MSV several years ago by a Glass family descendent might offer some clues. 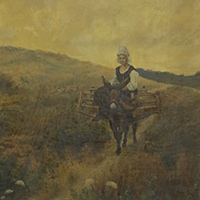 The central focus of the oil painting is a woman riding a mule or donkey, dressed in costume traditional to the Dutch Lowlands. Strapped to either side of the mule/donkey are crates. Crates and baskets like these have been used all over the world with pack animals, but they were particularly common on farms in Ireland up through the 1930s.

Called creels—or sometimes a bardog creel if it was hinged—these containers served multiple purposes. They could hold turf or manure for spreading on land as fertilizer, or they could also help carry goods to market as depicted in this painting. We may never know if the painting depicts a scene Kate saw in rural Europe, or if it is simply a blending of the people and events she encountered there. The latter is more likely. 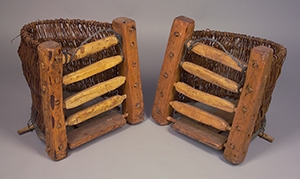 Kate returned to America sometime in the late 1800s and turned her attention to educating the next generation. With her business partner and fellow educator Laura Washington Gold, Kate opened the Fort Loudoun Seminary in 1905. The Seminary was an outgrowth of a music school Kate had conducted on the site a few years before.[iii] 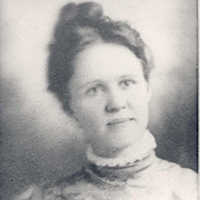 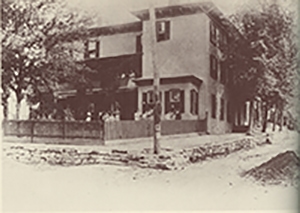 The Seminary building sat on the ruins of Fort Loudoun, a French and Indian War-era fort constructed by a young George Washington starting in 1756. Playing on the history of the site and in keeping with the “Colonial Revival” style popular at the time, Kate and Laura Gold decorated the seminary’s interior with Windsor chairs, spinning wheels, yarn winders, brass candlesticks, and the like. 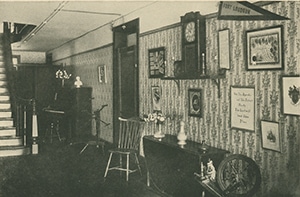 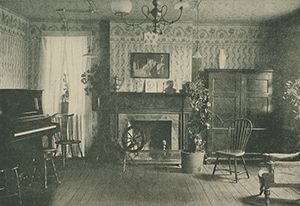 The school operated for the next twenty years with Kate as President. At first, the majority of students came from the surrounding area. But as the years passed, young women from across the country and even the world swelled its ranks. The goal of the Seminary was not to produce housewives, but to cultivate young women who would take their education into the wider world. Many of the Seminary’s students earned college degrees and became educators themselves.[iv] 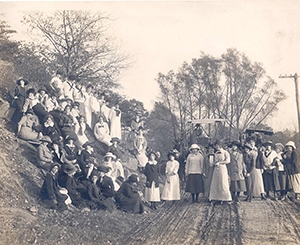 Art education was a key component of a young woman’s course of study at the Seminary. According to one of the Seminary catalogues from the 1914-1915 academic year, instructors—presumably including Kate Glass Greene herself—covered topics including “Elementary Drawing, Charcoal, Pen and Water-color; Figure Drawing and Painting, History of Art; Historic Ornament; Principles of Design; Painting in Oil, Still-life Groups; Practical Perspectives; Sketch Class; and Practice of Art.”[v] Several images survive of students outside at their easels, using the hilly landscape of North Loudoun Street and the seminary building itself as inspiration. 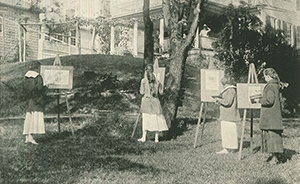 How exactly Kate’s own artwork fit into the Seminary curriculum is unknown. At minimum, it adorned the walls of the building and served as decoration. The Dutch Lowland painting discussed earlier appears in one image labeled “In the Office,” alongside other prints, engravings, and paintings on the wall. Without doubt, Kate’s artwork served as inspiration to which the students could aspire. 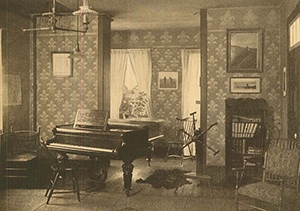 Kate’s landscape is not the only object from the Fort Loudoun Seminary to enter the MSV’s collection. Museum benefactor Julian Wood Glass Jr. inherited numerous family heirlooms directly from his Aunt Kate. He also purchased other pieces from Kate’s estate after her death in 1948. Many became fixtures at Glen Burnie during Julian’s lifetime.

Pictured below and to the left of the farming scene in the “Office” photo is a burl-walnut grand piano. Kate purchased this piano, made by John Broadwood & Sons in England, in 1905 from a Washington, D.C. auction company for use at the Seminary. The purchase price: $150. 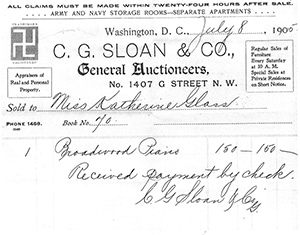 Julian Wood Glass Jr. acquired the piano after Kate’s death. The piano found a new home in Glen Burnie’s Drawing Room, completed in the 1950s. Julian Glass and R. Lee Taylor utilized the piano at parties and gatherings spanning the next few decades, making it a central component of that space. In fact, it is still there today, where it sees occasional use during concerts and other programs. 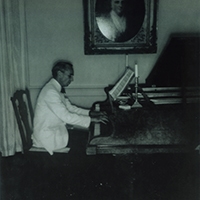 In 1925, Kate closed the Fort Loudoun Seminary due to ill health, but not before she had graduated 137 women over the school’s twenty-year history. Public schools in Winchester and the wider United States were also on the rise, lessening the need for private school alternatives.[vi]

Today, the legacy of Kate Glass Greene and the Fort Loudoun Seminary survives through objects in the MSV Collection. While the piano was conserved several years ago—returning it to playing condition—other objects like Kate’s landscape painting need your help! The landscape has suffered damage over time, and requires the careful attention of a conservator. Are you interested in helping preserve this important piece of Valley women’s history? Please contact Curator of Collections Nick Powers at npowers@themsv.org.