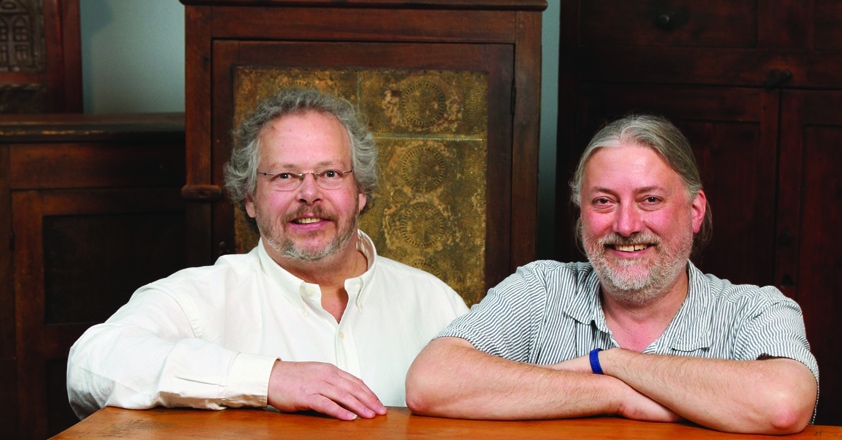 Coauthored by Valley scholars Kurt C. Russ and Jeffrey S. Evans, the publication is based on the research of The Virginia Safe Project, which the authors launched in 2010. The ground-breaking volume documents and greatly expands on the content presented in the exhibition Safes of the Valley, which took place at the MSV in 2014–15.

According to MSV Executive Director Dana Hand Evans, Opening the Door has been eagerly awaited by scholars, private collectors, and those with an interest in both Shenandoah Valley and American regional decorative arts and material culture.

“Thanks to Kurt Russ’s and Jeff Evans’s passion and knowledge about safes, the story of an 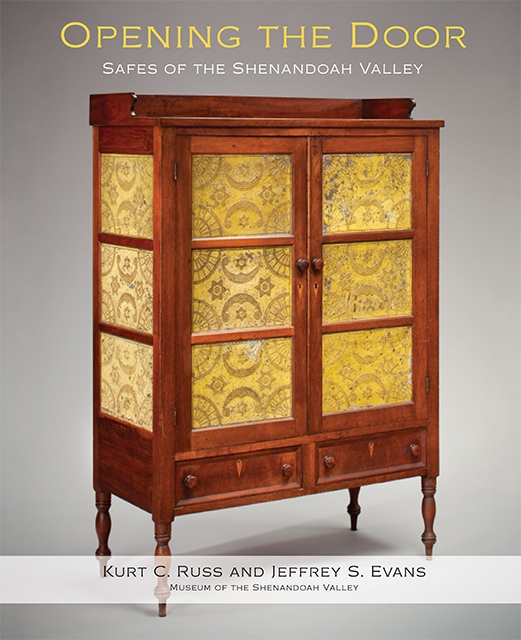 Often called a “pie safe,” the safe is defined by its tin panels that are punched with decorative patterns to allow ventilation. Common in nineteenth-century homes throughout the mid-Atlantic region and beyond, safes stored a variety of items, from food to table wares to textiles. This book tells how and why this ubiquitous furniture form became highly developed in the Shenandoah Valley region and evolved from a simple storage cabinet into a symbol of cultural and social identification.

In the book, authors Russ and Evans provide an introduction to and history of the basic safe form, from the seventeenth century to the first quarter of the twentieth century. They also reveal how safes provide insights about the people who produced and used them. In addition, the authors identify types and regional variations of safe forms and tin patterns, document significant new cabinet shops and regional schools of production, and explore the interactions of artisans. Russ and Evans also consider the changing functions and perceptions of the safe in the home, and they trace the safe’s transition from the kitchen and pantry into the dining room, parlor, and beyond.

In Chapter V, “Phil Baker: The End of a Tradition,” readers are introduced to house builder and carpenter Philip F. Baker, who continued to make safes in the Brocks Gap area of western Rockingham County into the 1930s. The chapter explains how modernization and socioeconomic factors played a key role in the end of the safe-making tradition. The documentation of the Baker shop, which the authors viewed exactly as Baker last left it in the 1930s, is one of numerous exciting discoveries presented in the book.

“Just as most people in the Valley once opened the door of a safe to retrieve food and other items, we hope this publication provides food-for-thought that opens the door to a new understanding and appreciation of this long-ignored form of Valley material culture,” say the authors of this book.

At 136 pages, Opening the Door: Safes of the Valley is the fourth book the Museum of the Shenandoah Valley has published. Richly illustrated with images of safes and their distinctive tin patterns, it is now available for purchase in the MSV Store for $44.95.

In conjunction with the publication of Opening the Door, the MSV is exhibiting three significant safes in its Collection. These include a server safe dating to 1875 and made by William F. Petefish (1846–about 1920). Working in the town of Honeyville of Page County, Virginia, Petefish made the safe of poplar, yellow pine, and tinned sheet metal and signed it multiple times. It serves as the benchmark for an important school of safes produced in Page County from the 1830s to the 1880s. The MSV acquired this safe in 2016, and it is on display for the first time in the Museum to celebrate the book’s publication.

Also on display is a closet safe, made about 1831 by the prominent team of cabinetmaker Matthew S. Kahle (1800–1869) and tinsmith John Henson (active 1819 to after 1831). Collaborating in Lexington, Rockbridge County, Virginia, this team produced a group of safes depicting political figures and other patriotic images, with this safe’s tins depicting images of President George Washington. Alongside this safe is displayed a typical storage safe of about 1865, made for the Albrite family in the Fulks Run area of Rockingham County, Virginia, by a craftsman whose identify is unknown.

To celebrate the publication of Opening the Door: Safes of the Valley, the MSV will host a free safe-identification clinic and book signing from 2 to 4 p.m. on Saturday, November 4. Attendees are invited to bring images of safes they own for identification by the authors. Safe images should include views of the safe overall, one end, a detail of the tin design, and the back, if possible. If the safe has a drawer, attendees should provide a photo of the drawer’s side showing construction or, better yet, bring the drawer itself to accompany the photos. There will be a limit of one identification per person, please. MSV admission is not required to meet the authors or participate in the safe-identification clinic.

Authors Kurt C. Russ and Jeffrey S. Evans co-direct the Virginia Safe Project and are among the country’s leading experts on the material culture of the Shenandoah Valley. Their scholarship on the safe received national attention with publication of their article about the Kahle-Henson School in American Furniture 2012 of the Chipstone Foundation.

Kurt Russ, executive director of the Mountain Valley Preservation Alliance, Inc., formerly was director of the Laboratory of Anthropology at Washington and Lee University. He has more than 30 years of experience in archeology, material culture, and decorative arts research and historic preservation, and he has directed excavations of numerous sites of historical interest in Virginia. Russ has guest curated exhibitions at The Virginia Historical Society and Museum of Early Southern Decorative Arts (MESDA) and has authored numerous articles, including two focusing on Virginia ceramics and furniture and an article coauthored with several colleagues and published in Ceramics in America.

President of Jeffrey S. Evans & Associates, Inc. in Mt. Crawford, Virginia, Jeff Evans has guest curated and authored catalogues for exhibitions at the Shenandoah Valley Folk Art and Heritage Center and the Virginia Quilt Museum. At the MSV, he curated Come In and Have a Seat: Vernacular Chairs of the Shenandoah Valley and authored its catalogue. His many lecture venues have included MESDA, where he serves on the Advisory Board, Winterthur Museum, Colonial Williamsburg, and more. One of the country’s leading authorities of nineteenth-century American glass, Evans has lectured at the Corning Museum of Glass and New York City Ceramics and Glass Fair, among many other venues. END