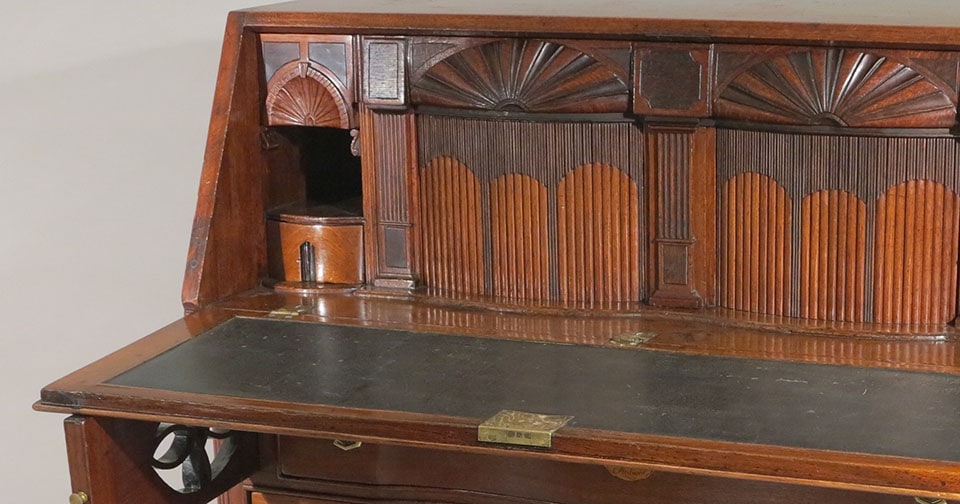 One of the first things I look for as a curator is the provenance – or history – behind an object. A strong provenance can often be the introductory clue that leads to unlocking an object’s secrets and weaving a story around it. Sometimes, though, provenance can also be good for a laugh. One such example is the MSV’s John Shearer fall-front desk, recently conserved and now on view in the Collect, Preserve, Interpret exhibition. 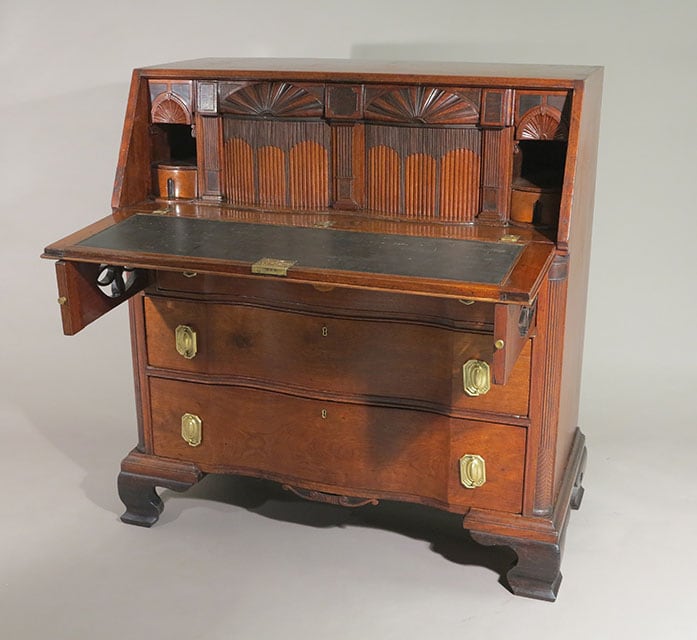 Shearer lived in the Shenandoah Valley and western Maryland in the years following the American Revolution. As war between England and France loomed again in the 1790s and early 1800s, Americans – including those in the Shenandoah Valley – began to split into political parties that supported one country or the other. Jeffersonian Republicans supported France, while Federalists favored Britain’s trade relationship with the new United States.

As a Scottish-born craftsman with strong loyalties to the British Empire, John Shearer chose to work in those areas most sympathetic to England. These included Berkeley and Loudoun Counties in Virginia (Berkeley is now part of West Virginia) and Frederick County, Maryland, where Shearer probably made the MSV’s desk.[i]

Shearer turned to local newspapers for details of battles happening thousands of miles away, and British naval victories inspired subject matter for his furniture decoration.[ii] For example, the inscription on the lid of the MSV’s desk – “Lord Nelson and / Victory” – commemorates British naval hero Admiral Lord Horatio Nelson (1758-1805) and his flagship the HMS Victory. For more information on Shearer’s use of symbolism in his furniture, see author and researcher Elizabeth A. Davison’s The Furniture of John Shearer 1790-1820: “A True North Britain in the Southern Backcountry” (2011). 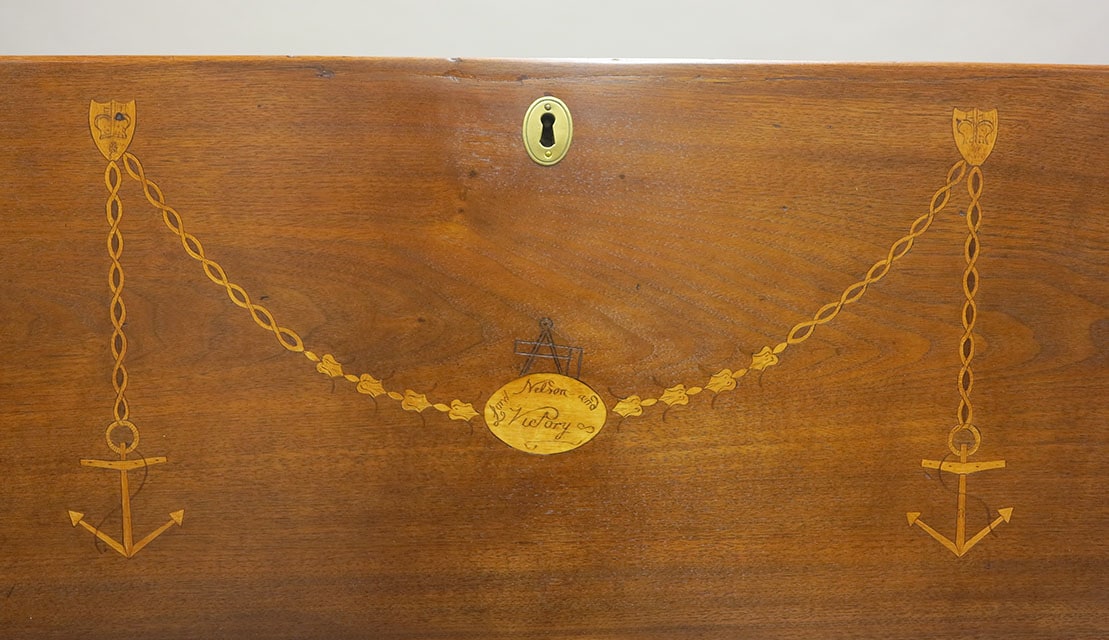 Fig 2. Detail of the inscription on the lid of the desk illustrated in Fig 1. 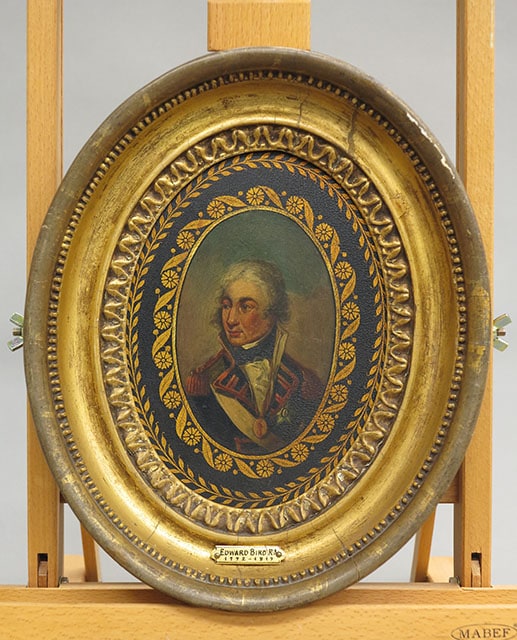 Around 1946, the MSV’s desk sold to help settle the estate of its then-owner, newspaper editor Charles H. Folwell Jr. (1871-1946) of Mount Holly, New Jersey. The desk probably entered Folwell’s family through the line of his late wife Mary Nelson Neill (1873-1923), whose family originated in the Hagerstown-Frederick, Maryland area. 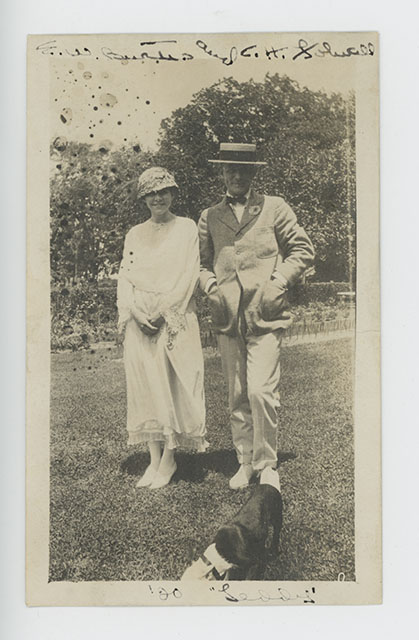 When the MSV acquired the desk in 2013 – almost seventy years after the sale from the Folwell estate – we also inherited some of the advertising materials from the 1946 sale. Included were dozens of printed flyers advertising the desk and even the engraved blocks used to print them. 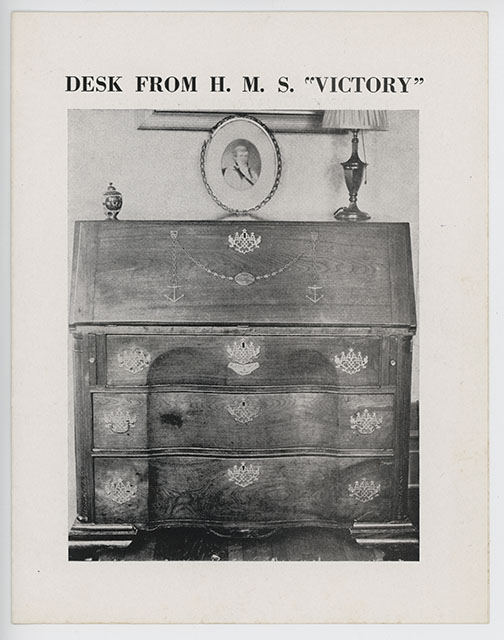 Fig 5. Front cover of the advertising pamphlet printed around 1946. Museum of the Shenandoah Valley, Archives Collection. 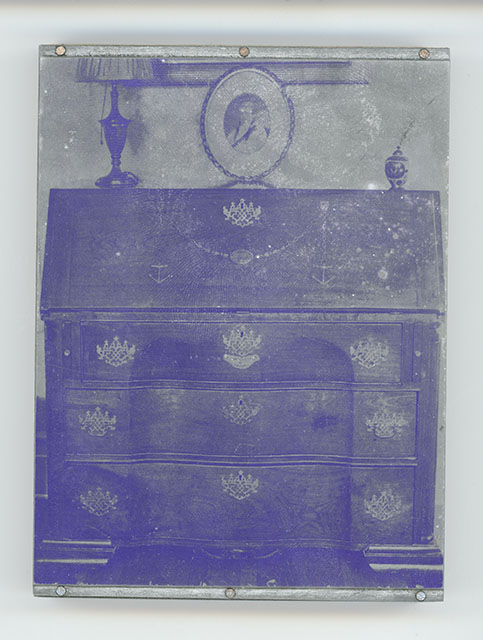 Fig 6. Print block used for the front cover of the advertising pamphlet. Museum of the Shenandoah Valley, Archives Collection.

The settlers of the Folwell estate took the inscriptions on the desk to heart, weaving quite the tale about the desk’s earliest history:

“THE DESK ILLUSTRATED in this folder was made on Lord Nelson’s flagship, the “Victory”, by the ship’s joiner, Shearer, for an officer – Lieutenant Stuben.

It has many secret locks and compartments, and is in excellent condition, with its original brass handles. The chair that went with it was acquired some time ago by the British Museum.

The desk is for sale. All its history that is known will be furnished in detail by the owner to whomever may be interested in its purchase.” 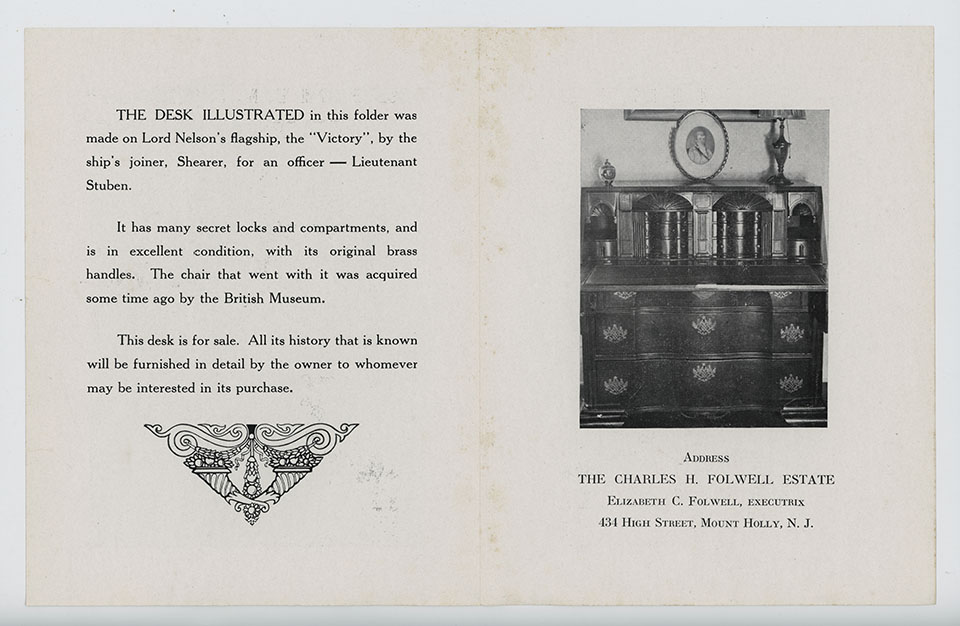 Talk about great advertising! While the content of the advertisement is less than accurate, the MSV has since restored the desk to reflect its original appearance. A furniture conservator raised the feet to their accurate height and replaced the “original brass handles” – actually later Chinese Chippendale-style replacements – with octagonal plate pulls consistent with evidence found on the desk, among other treatments. The flyer makes for a great story, though, and certainly a good laugh!

Fortunately, Shearer left us other clues to identify the desk’s original owner. The full story is worthy of its own post, but it is also worth introducing here. The top-most drawer of the desk bears an inlaid inscription reading “By Shearer / to / Stuben”. 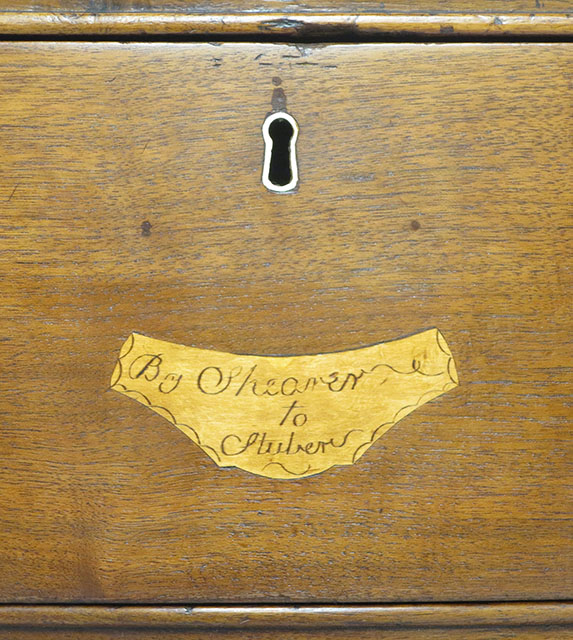 Fig 8. Detail of the inscription on the uppermost drawer of the desk illustrated in Fig 1.

Another inscription found on a note hidden behind the tambour doors inside the prospect (or desk compartment) further identifies the original owner as “an Honest Dutchman [or German] of the name of Philip Stover in Frederick County Maryland Close by the River”.

Recent research by Betsy Davison (author of the book mentioned earlier) has identified Stover as a blacksmith working in Frederick County, Maryland in the early 1800s. While not a British naval hero, Stover lived in the heart of a county heavily populated by Shearer’s pro-English allies.

Even without the “accurate” connection to Admiral Lord Horatio Nelson, John Shearer’s desk for Philip Stover is stunning when seen in person. Make sure to come visit it in the Museum’s second-floor galleries. We have only scratched the surface of this object’s many secrets. Make sure to also look for future blog posts covering topics like the desk’s many secret drawers!