Winchester, VA 8/06/14… A rare portrait miniature in the Museum of the Shenandoah Valley (MSV) Collection is entered in the 2014 Virginia’s Top 10 Endangered Artifacts competition. 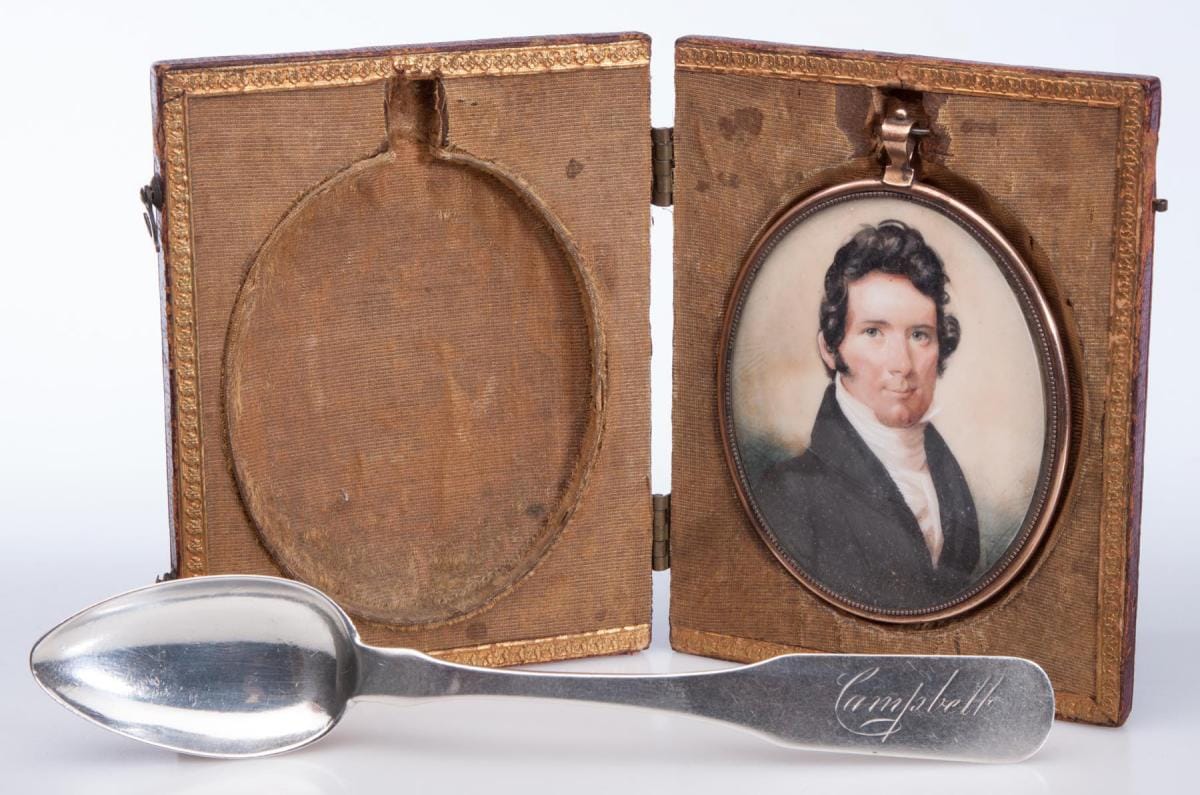 A project of the Virginia Association of Museums, the program began in 2011 to raise public awareness of the work museums do every day to care for the objects in their protection. Thirty-six endangered artifacts are in the competition, and the public is invited to vote for its favorite now through August 23 in an online at www.vatop10artifacts.org. The final Top 10 Honorees will be selected by an independent review panel of collections and conservation experts and will be announced on September 9.

According to A. Nicholas Powers, MSV curator of collections, this is the first year the Museum has nominated an artifact for the program. He notes that the MSV selected the portrait miniature from the many objects with conservation needs in the Museum’s Collection because of its significance to the Shenandoah Valley and Virginia.

Painted in 1823 by an unknown artist, the portrait miniature depicts silversmith Thomas Boyle Campbell (1796–1858) as a young man. Campbell was born into a well-established silversmithing family in Winchester. He apprenticed with his brother’s uncle in Lynchburg, Virginia, and after his brother’s death in 1815 returned to work in Winchester for the rest of his life, both independently and in the firms “Meredith & Campbell” and “Campbell & Polk.” Thomas Boyle Campbell died in 1858 and is buried in Winchester’s Mount Hebron Cemetery. He is one of the preeminent silversmiths in Virginia, and his work is represented in numerous private and public collections.

The miniature is a rare survivor as both a piece of Shenandoah Valley art and evidence of a successful craftsman’s life. As miniatures are personal objects and this one was painted two years after the silversmith’s marriage to Ellen Maria Smith, Powers suggests it is likely Campbell had it painted as a gift for his wife. It has a lock of hair beneath an oval glass bearing Campbell’s initials and an inscription on its back, “Born March 10, 1796/ 1823/ TBC.”

Fragile in condition and in need of conservation, the portrait miniature is on display in a special case in the MSV gallery-level lobby during the online voting through August 23. According to MSV Registrar and Collections Manager Kyle Bryner, the miniature has mold staining in the light areas of the background and a fine, dirty film over the entire painted surface. The miniature has slipped out of the bezel, the metal case is lightly discolored, the exterior surface of the glass is abraded, and the interior surface of the glass is covered with a dirty film. Bryner notes that a conservator has estimated it will cost $350 to $550 to address these issues.

The MSV acquired the portrait miniature in 2013 as part of a group of objects owned for more than 200 years by the descendants of the silversmith. The group includes silver spoons made by Campbell and an oil-on-canvas portrait of around 1840 that depicts the silversmith later in life. That portrait is undergoing conservation. According to Powers, survival of two portraits depicting a nineteenth-century Shenandoah Valley craftsman at different life stages is very rare. Once conserved and put on display in the MSV, they will, says Powers, “literally give a face and context to silver objects being made and used in Winchester in the first half of the nineteenth century.”

The MSV asks area residents to vote for this special object at www.vatop10artifacts.org. The website also provides a way to make a donation for the conservation of any of the 36 nominated artifacts on the “Top 10” web ballot.

The MSV owns and cares for more than 8,000 objects, including a collection of Shenandoah Valley objects, the fine and decorative objects inherited and acquired by MSV benefactor Julian Wood Glass, Jr., and the R. Lee Taylor Collection of fully furnished miniature houses and rooms. Along with the portrait miniature of Campbell, MSV objects most needing conservation include statues in the Glen Burnie Gardens and the Museum’s archival collection.

The Museum of the Shenandoah Valley is located at 901 Amherst Street in Winchester, Virginia. The MSV complex—which includes galleries, the Glen Burnie House, and six acres of gardens—is open Tuesday through Sunday from 10 a.m. until 4 p.m. The Museum galleries are open year-round; the Glen Burnie House and surrounding gardens are open April through October. Admission is $10 or $8 for seniors and youth ages 13 to 18. General admission is always free to youth ages 12 and under and to MSV Members, and thanks to generous sponsorship from Howard Shockey & Sons, Inc.,  it is free to all every Wednesday. Additional information is available at www.theMSV.org or by calling 540-662-1473, ext. 235.

Pictured Above: Portrait Miniature of Thomas Boyle Campbell (1796–1858) and a silver teaspoon—likely from Campbell’s personal service—with “TBC” in rectangle mark and engraved “Campbell.”  Photo by Will McGuffin, courtesy of Jeffrey S. Evans & Associates.