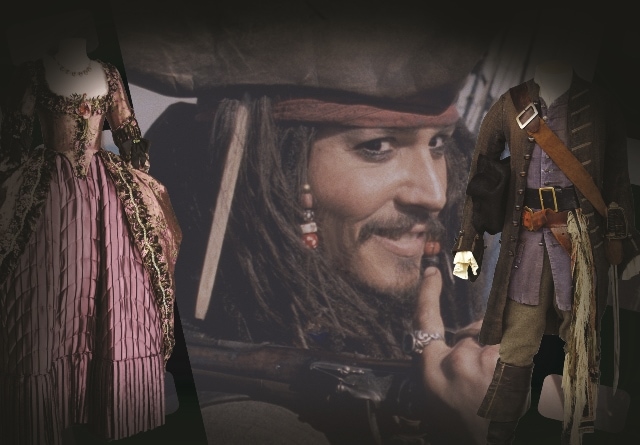 Winchester, VA 09/24/15… The art of making costumes for period films plays the starring role in CUT! Costume and the Cinema, a major traveling exhibition opening at the Museum of the Shenandoah Valley (MSV) on October 3, 2015.  Featuring 43 costumes depicting five centuries of style, the exhibition will be on view through February 28, 2016. Join us for the Premiere Party on October 2!

On view for the first time in the mid-Atlantic region during its MSV display, CUT! Costume and the Cinema takes an in-depth look at the art of making costumes that set the scene and establish authenticity in period films. Costumes in the exhibition are borrowed from the renowned British costume house Cosprop Ltd. Six of the films featured in CUT! have received Academy Award nominations for Best Costume Design and the exhibition includes six costumes—three dresses worn by Kiera Knightly, a formal ensemble worn by Ralph Fiennes, and two children’s costumes—from The Duchess, which received the 2009 Academy Award for Costume Design.

Films represented in the exhibition depict history, drama, comedy, fantasy, and adventure from the 1500s to the 1900s through costumes worn by such film stars as Johnny Depp, Kate Winslet, Heath Ledger, Emma Thompson, Robert Downey Jr., Anjelica Huston, and many others. In all, more than 30 actors and 25 films will be represented, including Pirates of the Caribbean, Sense and Sensibility, The New World, Gosford Park, Sherlock Holmes, and The Phantom of the Opera.

“We are excited to have the opportunity to present CUT!” says MSV Executive Director Dana Hand Evans. She notes that the exhibition is the first in the MSV’s 10-year history that focuses exclusively on clothing. Director Evans adds that CUT! Costume and the Cinema was scheduled for display as a companion exhibition to portraiture currently on view in the Museum’s Founders Gallery.

Face to Face: Portraits from the Julian Wood Glass Jr. Collection displays 35 eighteenth- and early nineteenth-century British, American, and Dutch portraits from the collection of MSV benefactor Julian Wood Glass Jr. (1910–1992). The exhibition explores the lives of the portraits’ sitters and illustrates how clothing served similar purposes in portraiture—conveying status, social position, and age—as costume details in period films. As few of the portraits in Face to Face depict subjects in full length, the costumes featured in CUT! will provide visitors with a comprehensive look at the styles worn by many of the portraits’ sitters.

According to MSV Deputy Director of Arts and Education Nancy Huth, costumes play a critical role in period films. Each character in a film must have a costume appropriate to the period and the director’s vision.  Along with displaying the work of some of the world’s best costume designers and costumers, CUT! details the research and creative process critical to developing a costume appropriate to the aims of the film. Huth anticipates that visitors will enjoy the opportunity the exhibition provides to examine the details of costumes that may have only appeared for a few fleeting seconds on screen.

CUT! Costume and the Cinema is organized by Exhibits Development Group, USA in cooperation with Cosprop, Ltd., London, England. The MSV display is sponsored by the Alamo Drafthouse Winchester and Shenandoah Country Q102. Following its display in Winchester, the exhibition will travel to the Heritage Museum and Gardens in Sandwich, Massachusetts, and the Columbia Museum of Art in Colombia, South Carolina.

The Museum of the Shenandoah Valley is located at 901 Amherst Street in Winchester, Virginia. The MSV complex—which includes galleries, the Glen Burnie House, and six acres of gardens—is open Tuesday through Sunday from 10 a.m. until 4 p.m. The galleries are open year-round; the house and gardens are open April through October. Admission is $10 or $8 for seniors and youth ages 13 to 18. General admission is always free to youth ages 12 and under and to MSV Members, and, thanks to generous sponsorship from Howard Shockey & Sons, Inc., it is free to all every Wednesday. Additional details and information about programming related to CUT! Costume and the Cinema are available at www.theMSV.org or by calling 540-662-1473, ext. 235. –END–

CUT! is organized by Exhibits Development Group, USA in cooperation with Cosprop, Ltd., London, England. The MSV display is sponsored by the Alamo Drafthouse Winchester and Shenandoah Country Q102.