The Dirt: Bean There 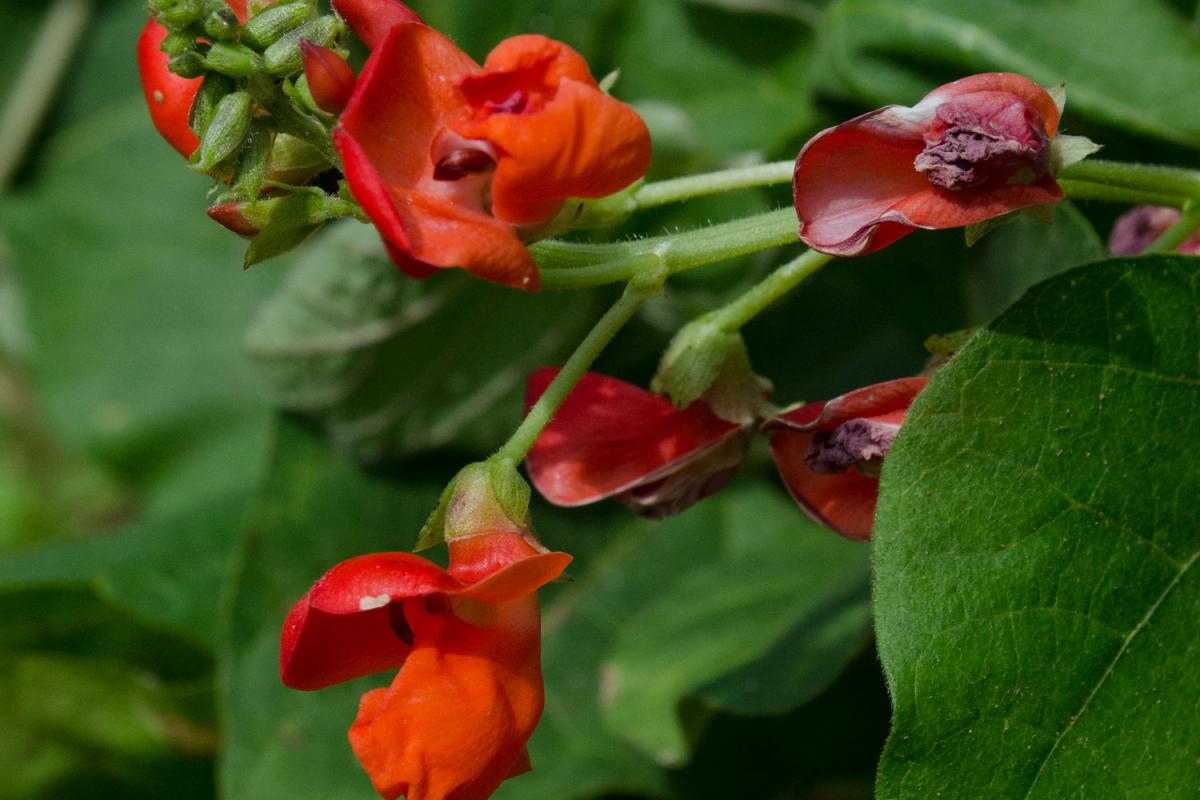 We try some new varieties of vegetables each year so you never quite know what you will find.

I wrote a blog about our Vegetable Garden last year so why write one again this year? Well, because the garden is just so different this year. That’s the beautiful thing about this garden. The space is the same, the theme (veggies) is the same, but the result is different. While there are a few perennials that are found here each year (asparagus and hops), we rotate crops around so the overall look is different from year to year. We also try some new varieties of vegetables each year so you never quite know what you will find.

Some of the new things we have tried this year are sweet potatoes, popcorn and cowpeas. The sweet potatoes did not look good during our wet spring, but with the summer heat they have recovered and now cover an entire bed. The dwarf variety of popcorn we got this year is coming along nicely, but it is also going nicely. The squirrels really seem to like the smaller size and carry off an entire ear at a time. I have found ears of corn in the Grand Allée and the Cemetery. The cowpeas have sprawled beyond the borders of their bed and have given us a bumper crop. 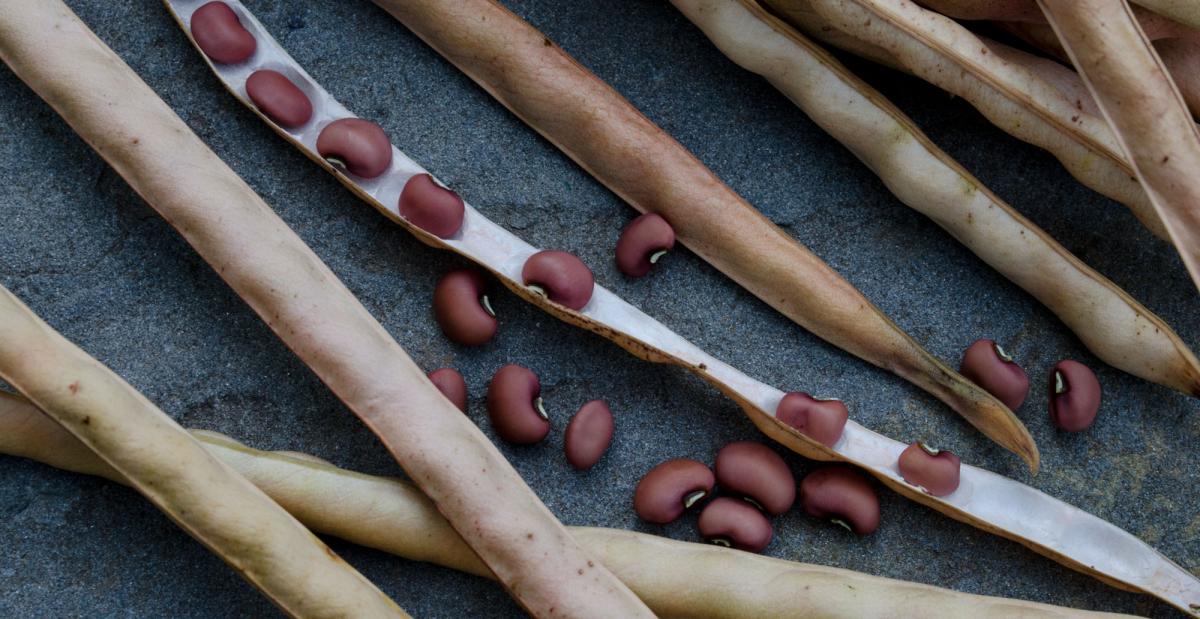 Cowpeas are a great legume as they do well in poor soils. There are many varieties and you may know some by other names: field peas, black eyed peas and Crowder peas. The variety we are growing this year is called Zipper Cream and when harvested fresh is supposed to taste somewhere between a traditional Red Ripper field pea and an English pea. While harvesting them for the food bank, I held a nice handful out for myself. Field peas are one of my favorite vegetables and I will let you know how they taste. 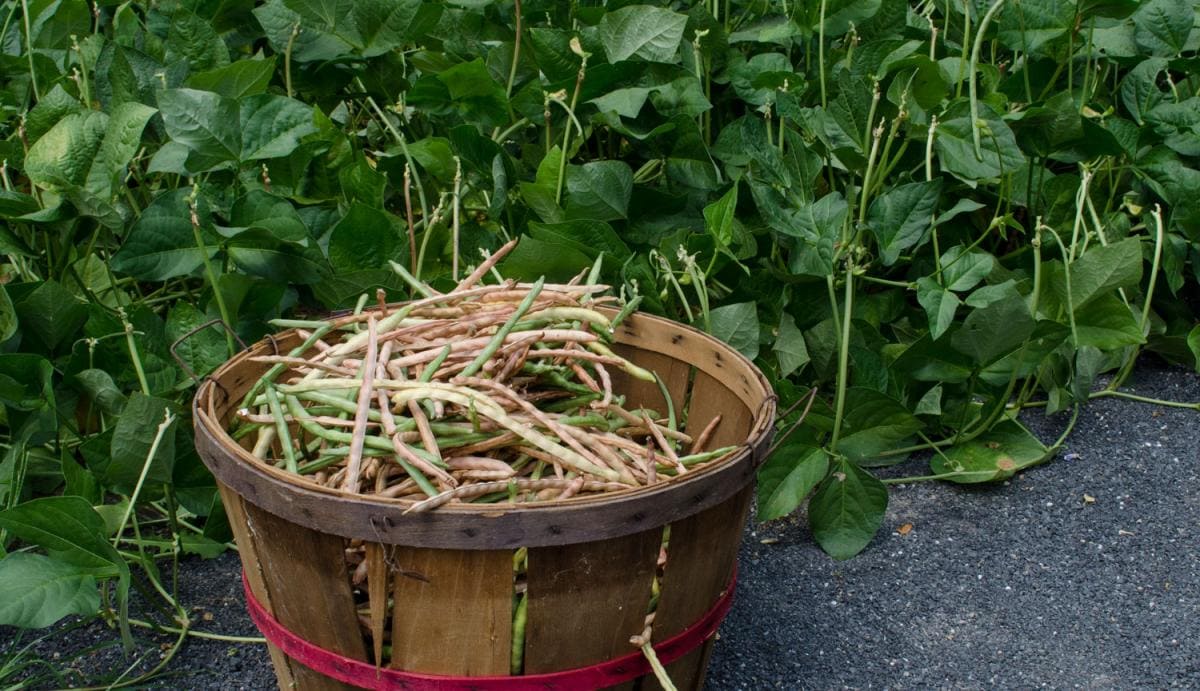 Right next to the cowpeas are bush lima beans. The variety we grew this year is called Henderson bush lima bean. It is an old Virginia heirloom dating back to 1885. The pods hold 2 or three beans which are smaller than the better known Fordhook lima beans, but the plants are loaded with the pods. It did not take very long to fill a five gallon bucket when harvesting them this week. 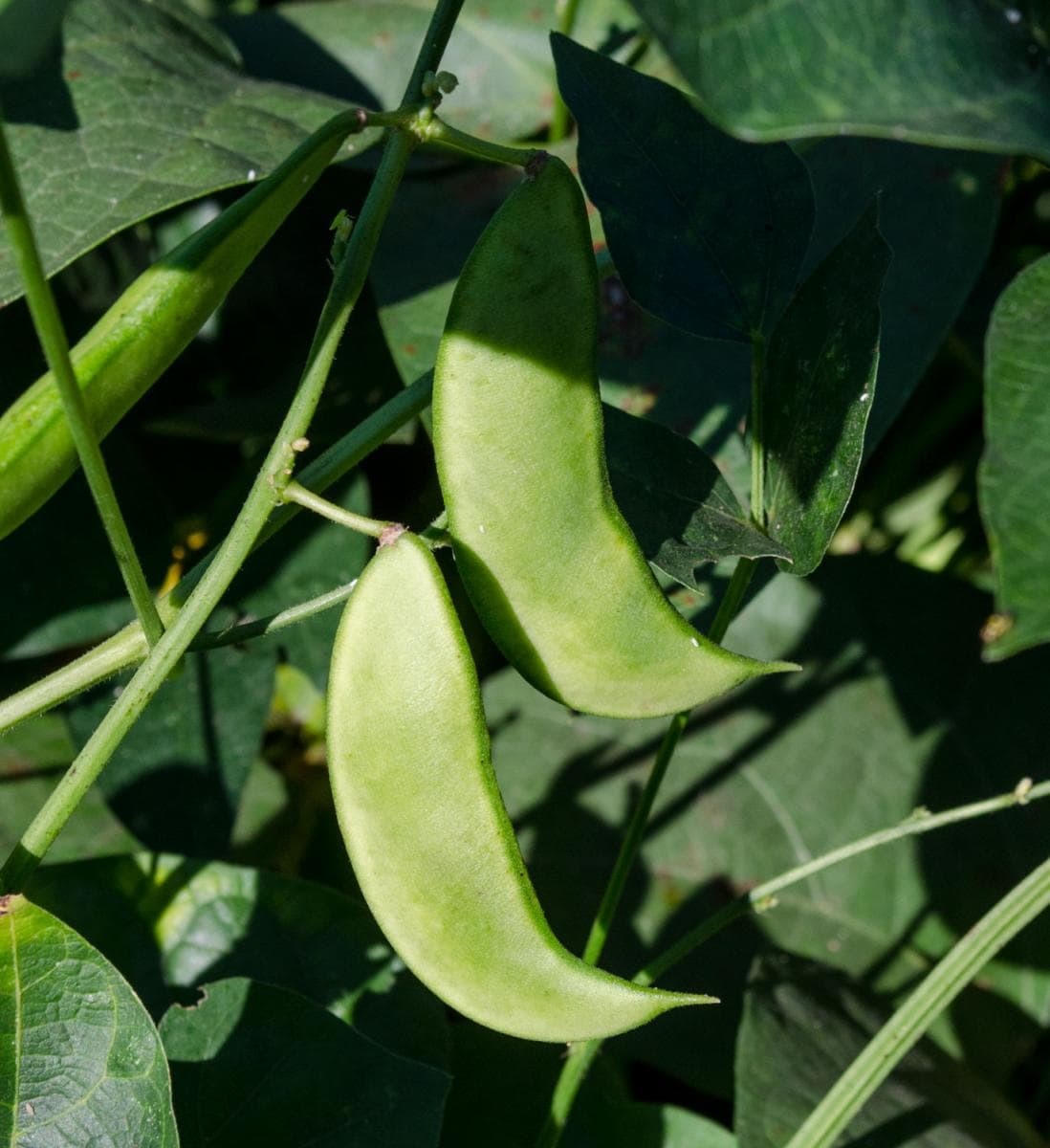 Another bean planted nearby is a bush snap bean called Royalty Purple Pod. As you can guess, the beans are actually purple, which makes them easy to find when harvesting them. Their color makes them really stand out in a salad or soup, although they do blanch to green when boiled for a few minutes. 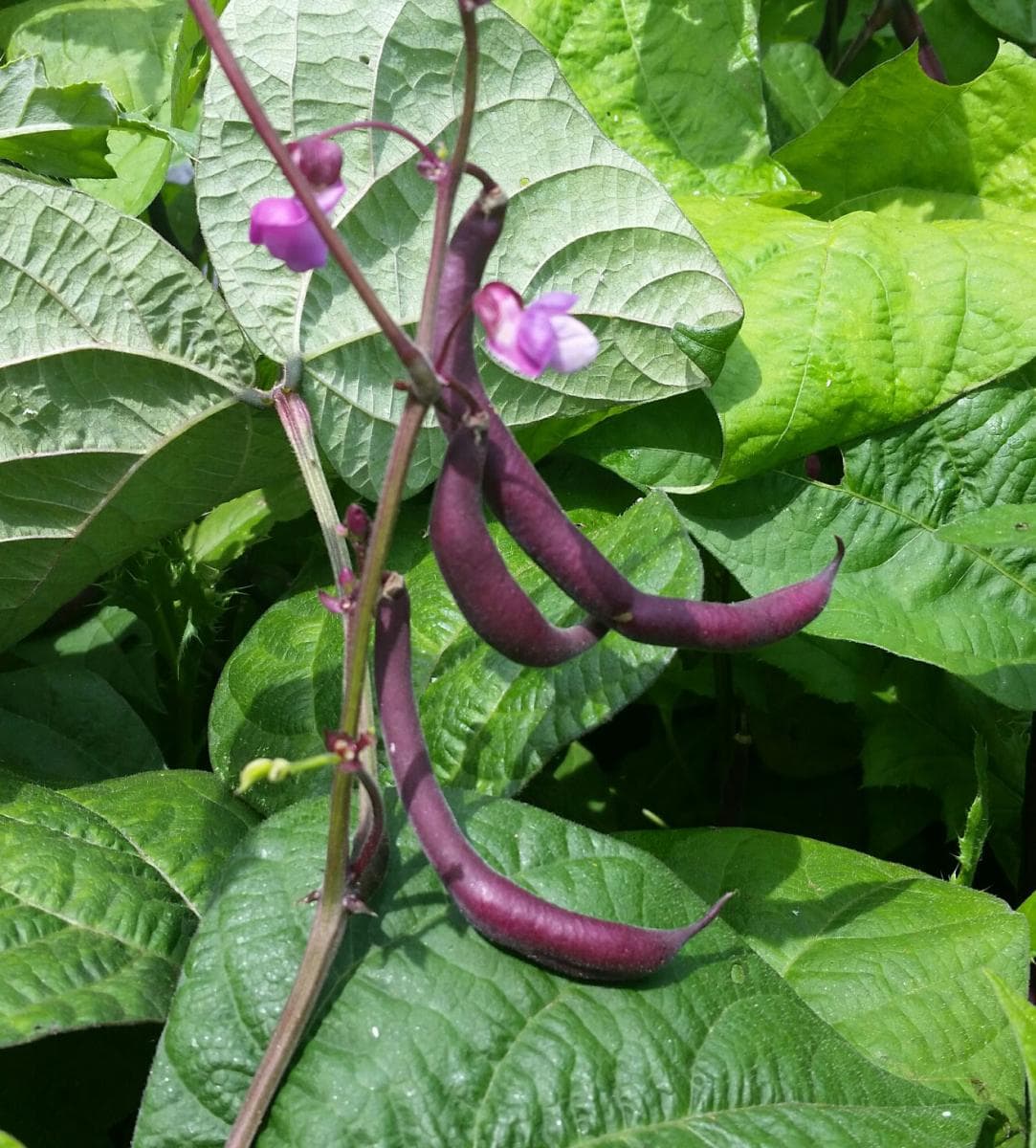 We did plant another bean late this summer. After two attempts to grow some Hickory King corn and after the squirrels ate or carried away everything so only that five stalks survived, we decided to plant some beans instead. This time we planted scarlet runner beans. It is an old fashioned green bean. We have no beans yet, but the flowers do look pretty. 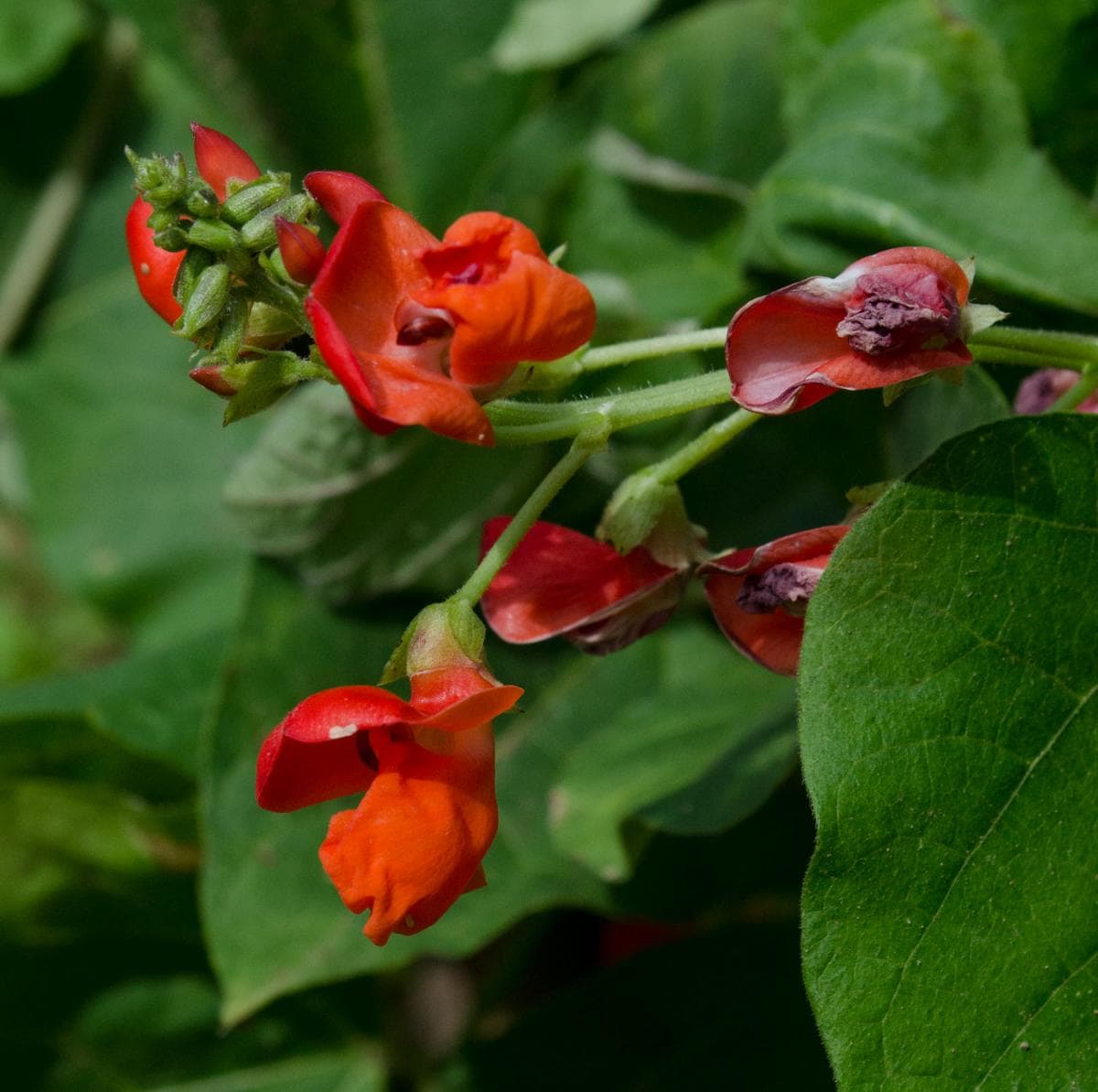 Finally, there is one last legume we planted that many might not realize is related to all these beans. We have several plants and they are getting ready to set their fruit – the peanut. Yes, the peanut is actually a legume with an interesting story. These low sprawling bushes produce beautiful yellow pea-like flowers. Once pollinated, the flower falls off and the ovary begins to form in what is called a peg. The peg grows down to the ground and once it goes into the ground, the peanut then begins to form horizontally under the soil. Right now it is easy to see the pegs forming and it won’t be long before we have some nice tasty peanuts to enjoy.

So come on out and enjoy the vegetable garden. The MSV’s Shenandoah Valley Tastefest is coming up on Saturday, August 28. Stop by the free event. I’ll be guiding a free tour at 10:30 a.m. and we’ll stop in the Vegetable Garden. It is always nice to see how some of those tasty vegetables grow. Take a tour of the garden and then go taste locally grown produce and more. See you soon.