MSV founder Julian Wood Glass Jr. (1910–1992) and his committed partner of over two decades, R. Lee Taylor (1924–2000), met in New York City in 1947 following service in World War II. For LGBTQ Americans of their generation, the second World War was a watershed moment. Over the course of the conflict, thousands of gay and lesbian Americans from across the country left isolated upbringings in rural areas. They mobilized into sex-segregated environments where they met people like themselves, perhaps for the first time. Upon being discharged from service, many veterans like Taylor and Glass remained in urban centers with the goal of creating community.

While Glass and Taylor maintained an apartment in New York’s Upper East Side, by the late 1950s they also undertook the restoration of Glass’s ancestral home, Glen Burnie, in Winchester, Virginia. In 1952, Glass inherited his father’s shares in Glen Burnie (and nearby Rose Hill). Over the next three years, he either inherited or purchased the remaining outstanding shares surrounding the two neglected houses.

To a certain extent, Julian Glass’s wealth, class, and privilege insulated him, his partners, and his close friends from anti-gay discrimination. But laws criminalizing homosexual behavior were a reality for the entirety of both men’s lives. In fact, anti-sodomy laws remained on the books in Virginia until 2013.

To protect themselves and their relationship, Julian Glass and Lee Taylor enacted a series of precautions that permeated life and landscape at Glen Burnie. Today, evidence of some of those safeguards can be found only in the MSV Collection, while others remain embedded in the wider landscape. Together, they can be used to decode and understand queer life—in all of its complexity—at our site.

Surviving letters between Glass and Taylor—and Glass and later partner David D. Denham (1943–2019)—provide one avenue for engaging with this history. Glass frequently signed off on letters to his significant others with a variation of the closing: “1, 2, 3, / Julian,” a coded message meaning “I love you.” In a few cases, Glass also utilized the number sequence within the body of his writing, like in a 1978 letter to Denham: “There is no purpose in any of this except to say 123 & I’ll think of you all & every day, till you stray.”

With a short sequence, Glass could convey his love without explicitly stating it. It is difficult to say with certainty, but this deliberate choice may have been in reaction to inspections by the U.S. Postal Service in the 1950s and 1960s of mail suspected of promoting homosexuality. While the Postal Service’s efforts largely targeted what they deemed “obscene” materials like physique magazines, gay pen-pal services and even private correspondence could be and were swept up in the investigations.

The landscape at Glen Burnie also played a role in ensuring that Glass and Taylor could go about their daily lives as a couple. In fact, the pair likely had such considerations in mind alongside their aesthetic choices when planning the renovation of the site in the 1950s. Glen Burnie fronts Amherst Street, which becomes U.S. Route 50 as Winchester meets the Frederick County line. Called the Northwestern Turnpike in the 1800s and early 1900s, Route 50 was and continues to be one of the most heavily trafficked routes in and out of Winchester. Even today, activity at Glen Burnie is easily visible from the sidewalk on Amherst Street.

Over the course of decades, Lee Taylor created and cultivated barriers that partially shielded daily life at Glen Burnie. First, he constructed (or in some cases expanded) a series of stone walls that hindered physical access to the property (and kept the farm’s cows out of his meticulously manicured gardens). While the stone walls (presumably) barred strangers from Glen Burnie, plantings controlled viewsheds and blocked unwanted—and perhaps unfriendly—gazes.

One of the best examples is a tall hedge (facing Amherst Street) that once stood between the rear kitchen door and the patio immediately outside of the Breakfast Room. Surviving photographs confirm that this patio was one of the couple’s favorite outdoor spaces: a place to interact with their numerous pets, enjoy brunch or iced tea with friends, family, and guests, or simply relax in one another’s company.

Not all aspects of life at Glen Burnie and Glass’s other properties in New York City and Tulsa, Oklahoma, were so encoded. Over the course of his lifetime, Glass acquired a collection of artworks that included a large representation of male nudes by both straight and gay artists. British painter Duncan Grant (1855–1978), who had love affairs with men throughout his life and who was part of the Bloomsbury Group of artists, philosophers, writers, and intellectuals, was a particular favorite of Glass’s.

The majority of these paintings and drawings adorned the walls of Glass’s Tulsa apartment. Today they are part of the Julian Wood Glass Jr. Collection at the MSV and are a key part of understanding Glass’s queer identity. But by interrogating the subtler aspects of our collection—like coded letters that signaled inclusion to some and protected against others, and landscape features that were both beautiful and purposeful—we continue to unearth a story that is richer by far. 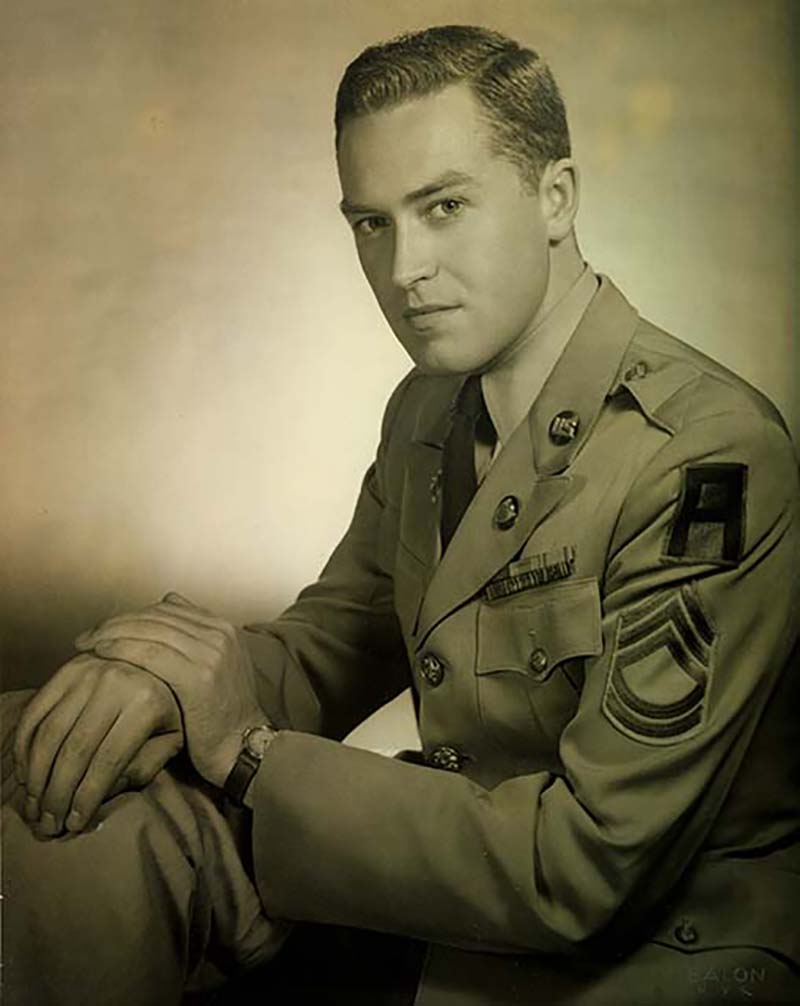 R. Lee Taylor (1924–2000), posing in his World War II uniform in New York City in 1945. Taylor bears the insignia of the First Army and the rank of a Technical Sergeant. He was a participant in the Normandy landings in June 1944. Collection of the Museum of the Shenandoah Valley, Wood-Glass Family Archive, WGFI.3572. 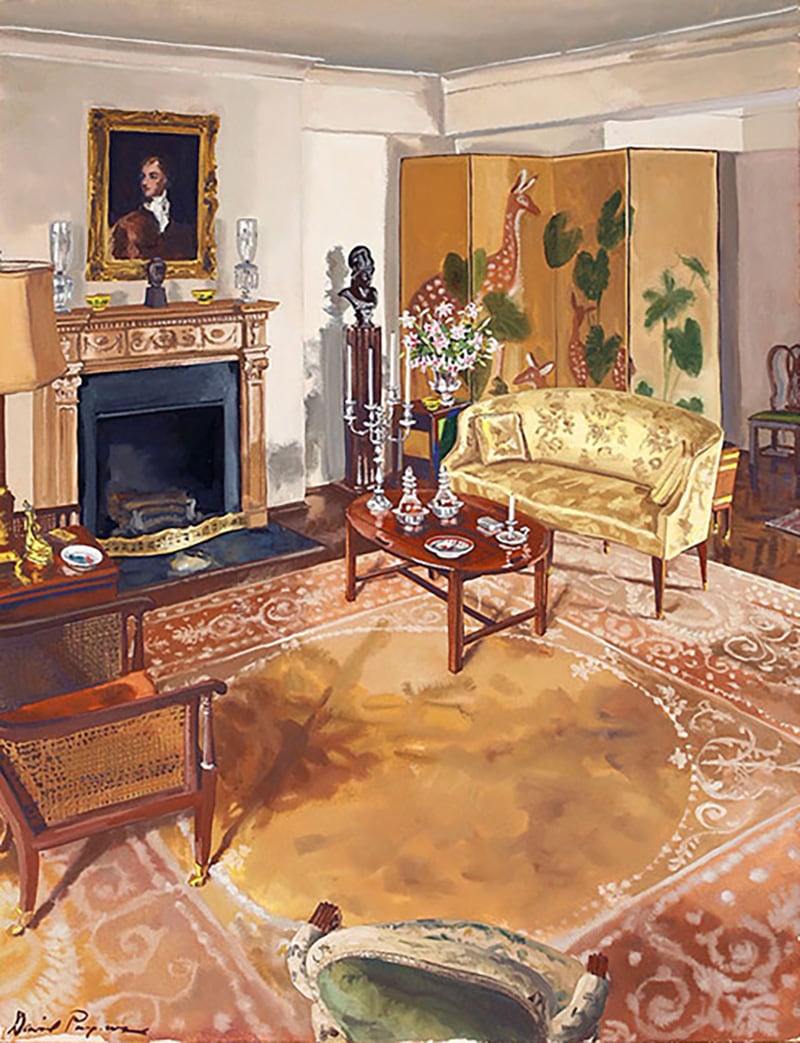 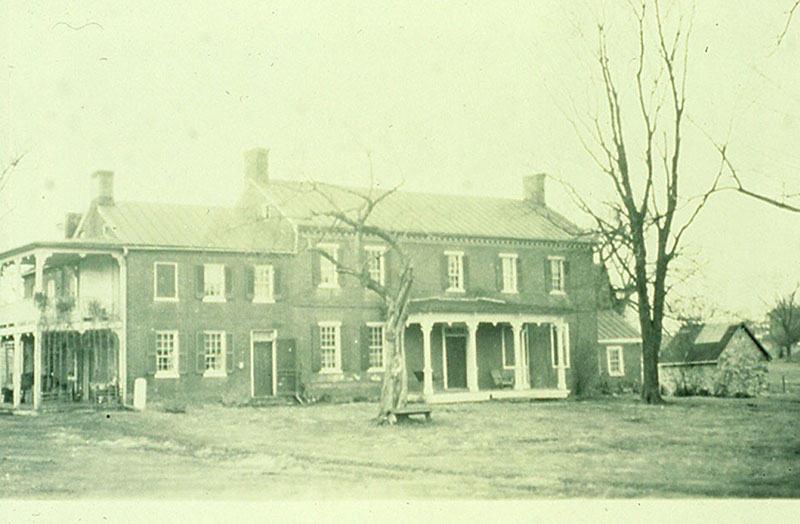 This photograph of Glen Burnie taken sometime between the 1930s and 1950s shows the house as it appeared prior to restoration by Julian Wood Glass Jr. and R. Lee Taylor. Collection of the Museum of the Shenandoah Valley, Wood-Glass Family Archives, WGFI.0420. 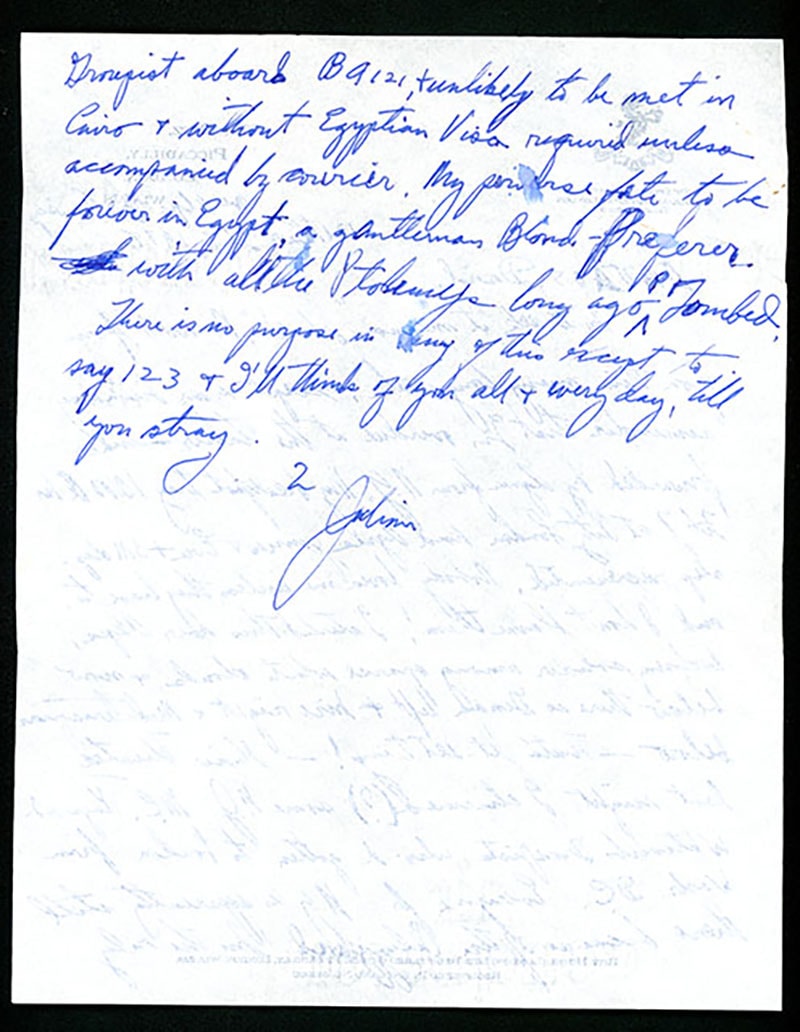 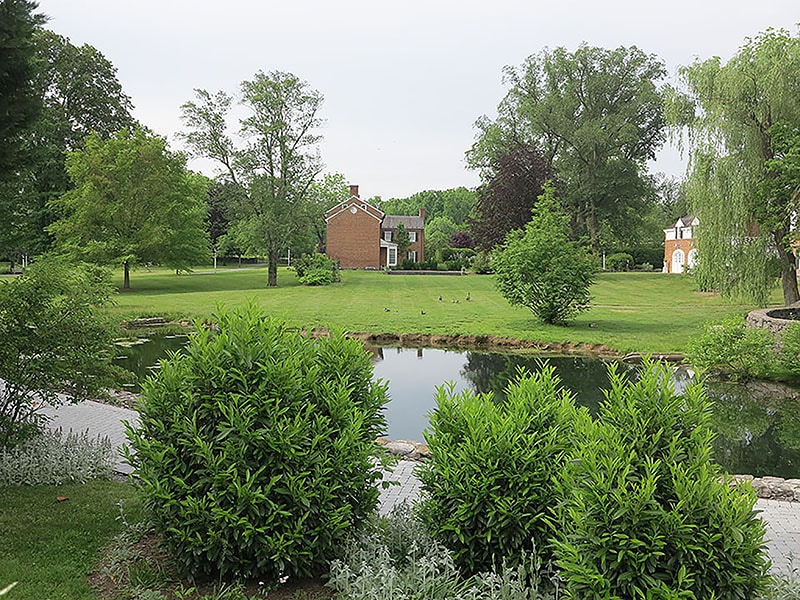 Photo taken from the sidewalk on Amherst Street looking towards Glen Burnie in 2021. Notice how both the front and the rear of the house are in clear view. Photo by the author. 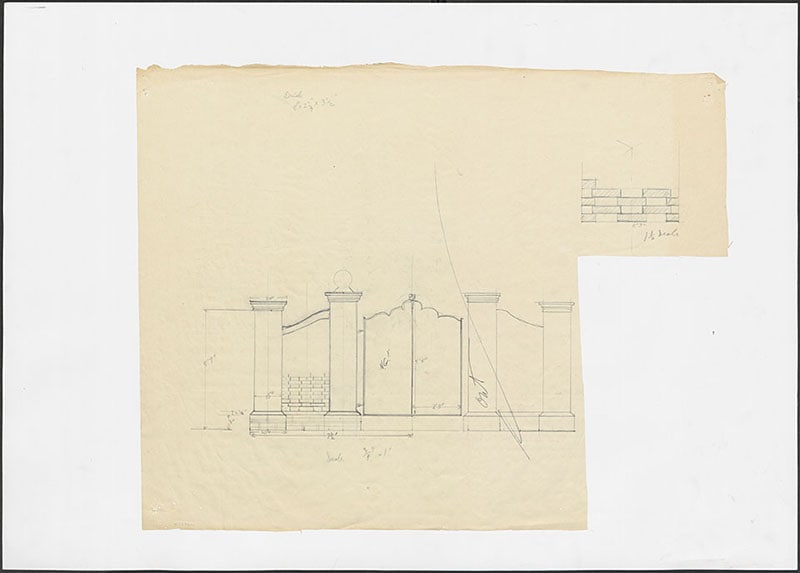 Sketch of a gate for use at Glen Burnie, probably 1950s or 1960s. Pencil on paper. Collection of the Museum of the Shenandoah Valley, Wood-Glass Family Archive, WGFP.4776. This design was never built, but it implies privacy. 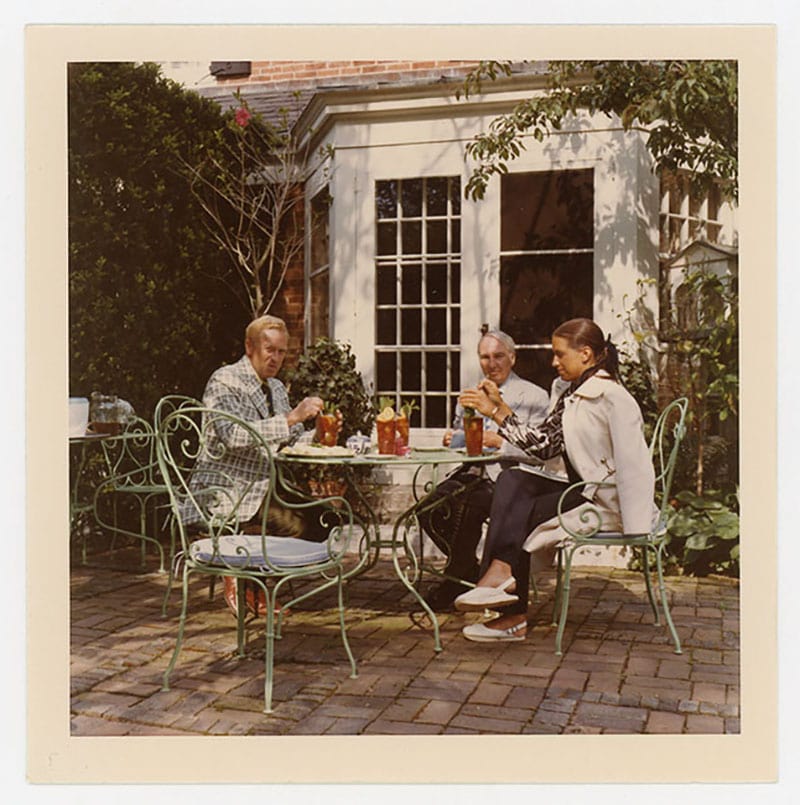 From left to right: R. Lee Taylor, Julian Wood Glass Jr., and an unidentified woman enjoying iced tea on the patio just outside of the Breakfast Room at the rear of Glen Burnie Note the large hedge behind Taylor (now gone) that blocked viewsheds from Amherst Street. Photo dated May 1973, just a couple of years before Glass and Taylor ended their romantic relationship. Collection of the Museum of the Shenandoah Valley, Wood-Glass Family Archive, WGFI.3908. 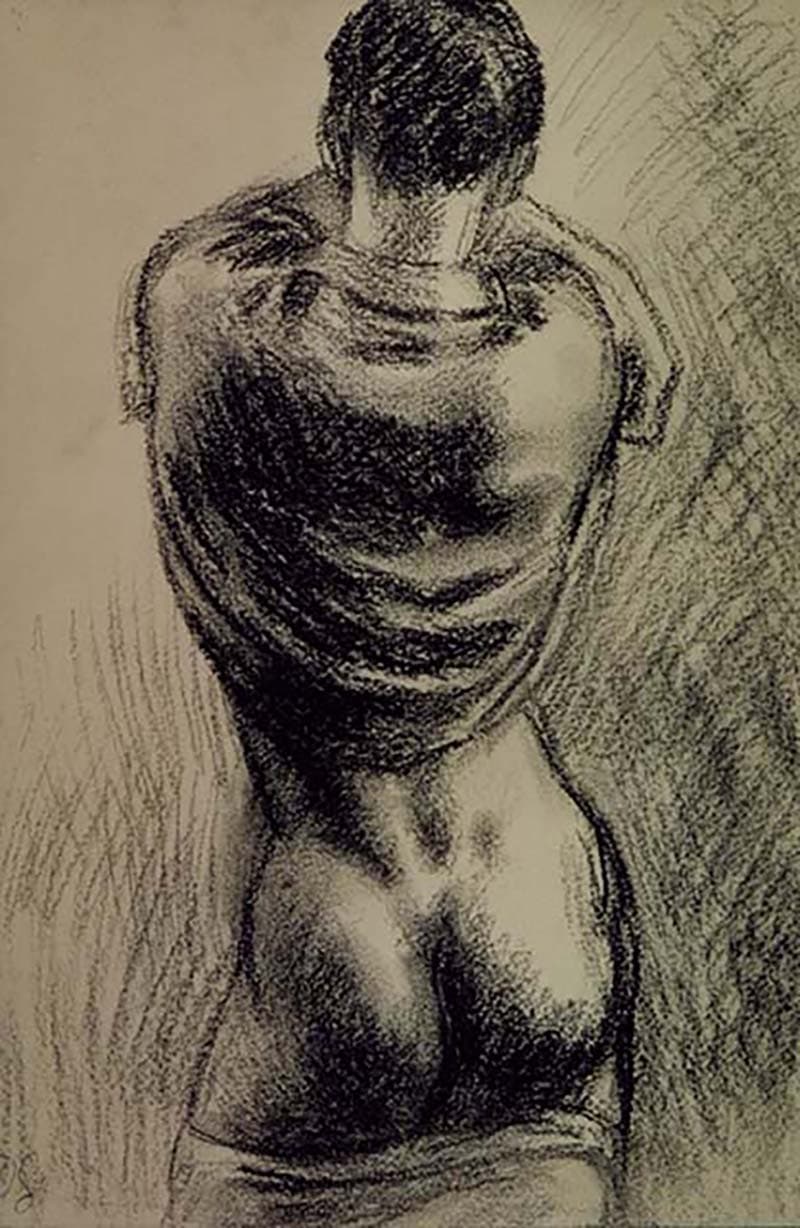