We also likely recall the sense of horror and disbelief that such a thing could happen on American soil, and the days of fear and grief that followed. From that experience, textile artist Peggy McHenry Printz made something of beauty: the quilt Angels Ascending and Descending, now on view in the exhibition Vital Force at the MSV.

Printz’s experience of quilts and sewing runs deep. According to a recent interview with the artist, conducted by MSV Curator of Collections, Nick Powers, quilts were part of her life as far back as she can remember.i Her maternal grandmother had a stack of what she called “comforts,” that were hand quilted. Printz herself began sewing on her mother’s machine when she was just five years old. Five years later, her mother died, so Printz stayed frequently with her grandmother. When cousins also came to visit, there were not enough beds, so they stacked up the quilts to serve as makeshift mattresses. That same grandmother gave the artist a quilt as a wedding present. Printz later made quilts for her three children. Although quilts and sewing had long been a part of her life, Printz didn’t become serious about quilting until she joined the Shenandoah Valley Quilter’s Guild in the early 2000s.

Printz has worked in oil and watercolor painting, and other art and craft forms, but she cites quilting as her most frequent hand-work activity. Over the years she has completed several themed or story quilts, which have sometimes provided a means for working through difficult issues in her role as a social worker.

Out of this tradition of comfort, family, and artistic exploration, came Printz’s response to the 9/11 attacks. “As a quilter, artist, American, Christian, I needed to grieve; respond; do something,” said the artist in a written statement. ii

The imagery of the quilt was inspired by a sermon delivered at St. Peter’s Lutheran Church in mid-town Manhattan five days after the attacks. According to the artist, “The pastor had talked to survivors who, in rushing down to safety, had passed firemen, police, and rescue personnel rushing up, into the heart of danger. This reminded him of Jacob’s dream [in the Bible] of a stairway to heaven, on which he saw angels ascending and descending (Genesis 28:12).”

To realize her vision, Printz employed multiple techniques, “a smorgasbord of surface design and stitchery,” as she put it. The quilt features numerous areas of text, including the artist’s original poetry and song lyrics, quotes from the first responders and those who thwarted the third attack, and passages from the Bible. These she printed on paper-sized pieces of pale blue silk that she had stabilized by ironing the silk onto freezer paper. She then singed the edges of these pieces by holding them to a candle flame. “This was to try to recreate one of the details reported by some first-hand witnesses of vast quantities of burned papers floating down,” wrote the artist. “It struck me that every scrap of paper represented someone’s work, someone’s life, maybe family photos.” She then hand-appliqued these pieces of text onto the quilt’s surface.

Material Printz had on hand from experiments in dying and painting fabric provided the background, made of hand-dyed, multi-color cotton, cut into strips, and sewn together. Of this dying and piecing technique, Printz has written, “I was trying to portray the richness of America’s multi-cultural heritage – from every nation, tribe, and tongue – with multi-color building blocks.” She added additional color with fabric paint, ink, crayon, and thread. To further emphasize the theme of Jacob’s ladder, Printz pieced the “towers” on the right and left edges in a variation of the “Jacob’s Ladder” patchwork pattern. Other techniques include photos printed on fabric and appliqued to the surface, embroidery, and free-motion quilting. From idea to completion, the quilt took Printz approximately 18 months.

Near the top edge of the quilt are four aircraft, “deliberately styled after war planes, which is how they were used,” noted the artist. They are inscribed with the flight numbers of the airplanes that were used to carry out the attacks. In the center of the quilt, angels and other figures climb the stairway of Jacob’s vision.  The quilt is replete with surface embellishments, photographic imagery, stitching, and text, capturing and demanding the viewer’s attention. “In addition to remembering and honoring the heroes and angels of 9/11/01,” wrote the artist, eerily foreshadowing more recent times, “I hope to honor all Americans who carry on in difficult, dangerous, often thankless jobs, to keep the rest of us safe and free. As you reflect on the quilt’s images and words, may you be inspired to live with joy, passion, and integrity. May you always be ready to climb Jacob’s Ladder.” 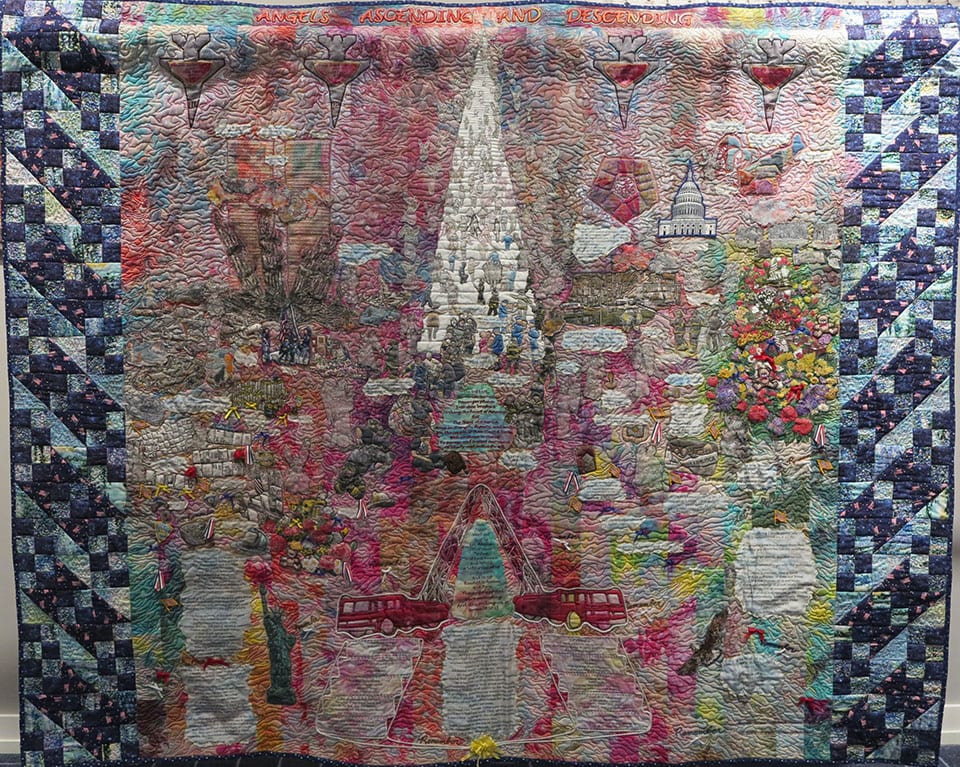 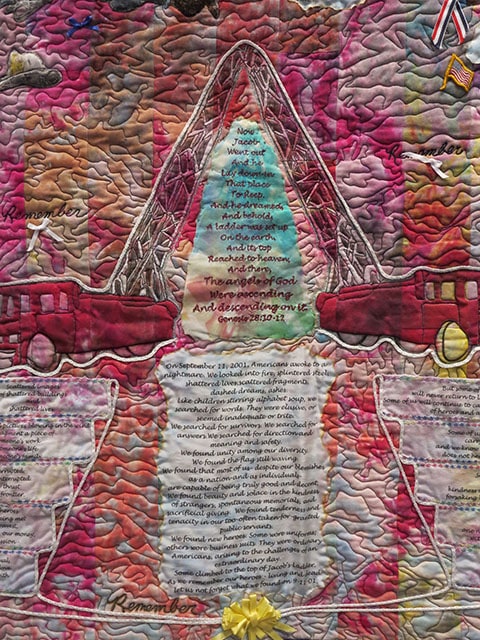 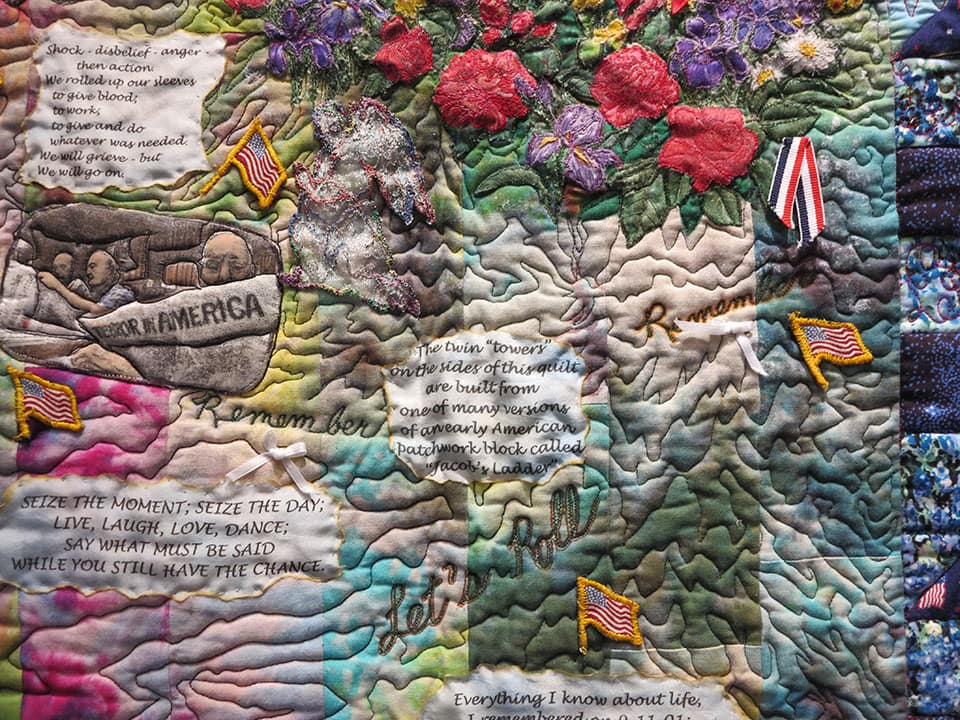 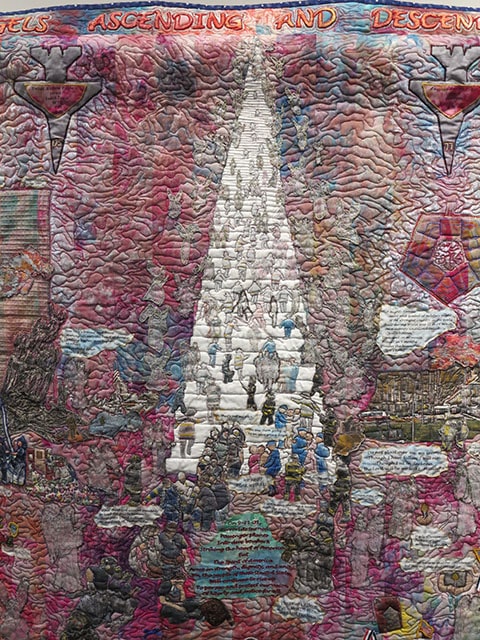 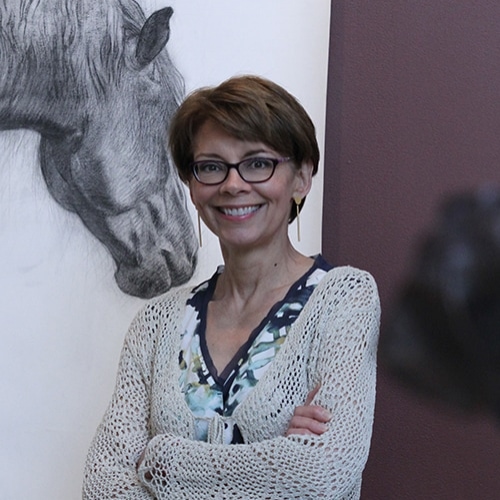