Local and regional schoolteachers now face the important but unenviable task of reintroducing students to classroom settings after those students spent over a year in front of computer and tablet screens. To make the jobs of our teachers easier, I would advise they take a lesson from their nineteenth century counterparts: bribery works.

Well, perhaps bribery is a bit of an overstatement. Praise might be more accurate. Throughout the 1800s, instructors in the Shenandoah Valley and elsewhere gifted rewards of merit to their students. Similar to the gold stars and in-classroom pizza parties from my childhood, rewards of merit were small gifts to schoolchildren who excelled in a particular subject or lesson or exemplified good behavior.

Rewards of merit in the 1800s ranged widely by type and in the expense taken in their creation. These variations reflect to some extent the lack of a public-school system in Virginia until the second half of the 1800s. Without state-run schools, it often fell to communities or church congregations to contract with individual instructors to educate their children. Consequentially—whether explicitly stated or simply understood—the cost of a reward of merit often reflected the expectations and financial means of the community the teacher served.

Small, take-home notes are some of the most common rewards of merit to survive. In some cases, children could present or exchange their notes at home for a present or treat (probably pre-negotiated between the teacher and the student’s parents). A good example is a rare set of six ink and watercolor on paper rewards of merit in the MSV Collection made for the children of Joshua Foltz (1779-1871) and Elizabeth Lindamood (1783-1868) of Shenandoah County.

Schoolteacher and artist James Wilson decorated several of the rewards of merit for the Foltz children with common Germanic fraktur motifs: hearts, birds, and floral sprigs. The relationship is unsurprising. Due to their ability to read, write, and draw, schoolteachers frequently earned additional income by creating decorative documents marking the important life events (births, baptisms, marriages, etc.) of their pupils’ families. The front of Wilson’s ticket (as he called the reward of merit) for young Katharine Foltz notes that she was “a very good Girl under my Tuition for Five Months Lessons & Tasks.”

While not as decorative, the back of the ticket might be what excited Katharine most. Wilson addressed her father, Joshua Foltz, directly, writing that “I hope this Ticket will merit from you to your Daughter Katharine a nice Calico frock…Your Daughter dose [does] Merit a frock I hope for her Attention to her book.” Other examples Wilson made for Katharine’s siblings call for such rewards as ginger cakes, a second frock, and an allowance of 6¼ cents (a little under two dollars today).

Other paper rewards of merit take the “cash prize” idea one step further by resembling real currency. In the early 1880s, brothers Henry and Willie Haymaker of Winchester received several reward of merit notes from their teacher, Sallie M. Glover. Issued in denominations of one hundred merits per note, each example is dated within a laurel wreath at upper center.

Hanging across the lower half of the note is a cross medal emblazoned with the letter “C,” possibly referencing a classical education common to nineteenth century curricula. Flanking the medal are objects that reinforce that idea, including an open book, a globe, a telescope, an artist’s palette and painting, a classical bust, and a series of columns representing the study of architecture.

Not all examples of rewards of merit are so ephemeral. Some were constructed of valuable materials like silver, which ensured that they would be treasured by their original recipients and later became family heirlooms.

One of the most impressive examples of a reward of merit in the MSV Collection is a cut silver, octagonal medal inscribed to Amanda Strayer (1808-1869). The daughter of John Strayer (1780–1864) and Dorcas Lincoln (1788–1862), Strayer likely earned her medal during her time as a student at the New Market Female Seminary in the late 1810s or early 1820s. Strayer’s family lived in the New Market vicinity, but the school’s location near the Rockingham-Shenandoah County border ensured that it attracted pupils from throughout surrounding communities.

While the front of the medal bears an inscription to Strayer, the reverse of it identifies the area in which she excelled: writing.

The medal unfortunately is not signed by its maker. But it probably is the work of George Kring, New Market’s only recorded silversmith, clock and watchmaker, and jeweler during the 1820s. In addition to Amanda Strayer’s reward of merit medal, Kring also is represented in the MSV Collection by a tall case clock and a pair of silver tablespoons with his rare mark.

Unfortunately—as is the case too often with women in history—we don’t know much about Amanda Strayer’s later life and how she might have applied her education and talent for writing. The few records we do have are largely biographical. She married Derrick Pennybacker Sr. (1797–1869) on December 12, 1831 in Shenandoah County. Census records from 1850 and 1860 indicate that Amanda was living in the Linville area of Rockingham County, probably near her mother’s relatives there. Also through her mother’s side, she was a distant relative of future President Abraham Lincoln.

But as they say, the proof is in the pudding. The survival of Amanda Strayer’s engraved reward of merit medal has guaranteed that nearly 200 years later we are still discussing her academic achievements. Kids, let that be a lesson to work hard and listen to your teachers! 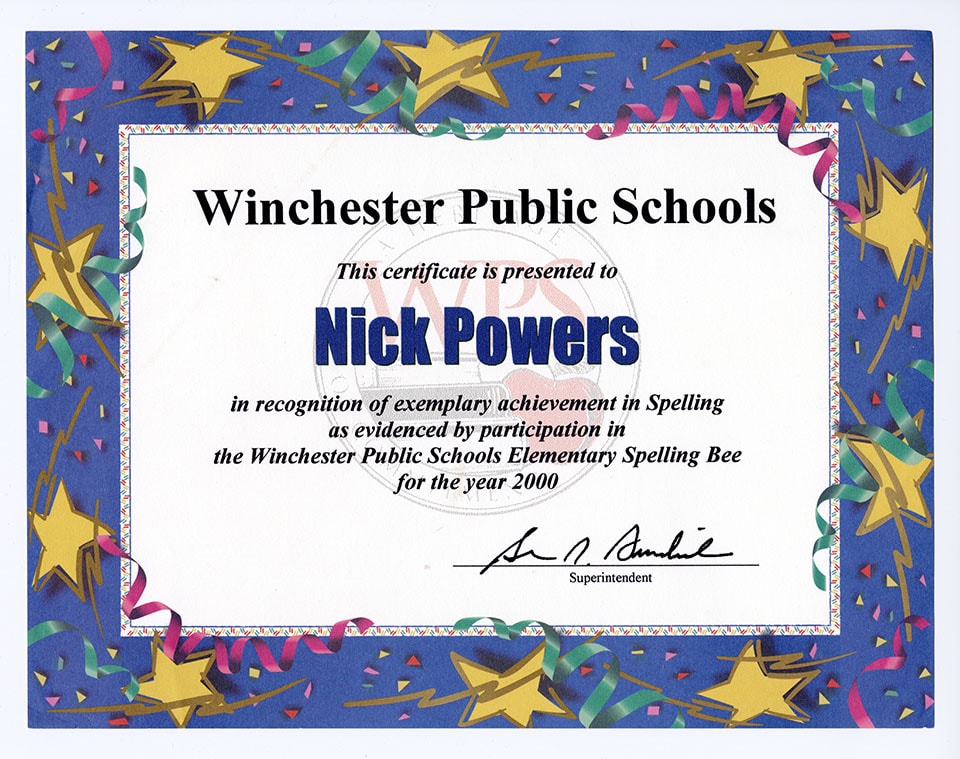 An example of a modern-day reward of merit from my childhood. I placed second in the spelling bee. Hats off to Taryn Russ for taking home the gold! 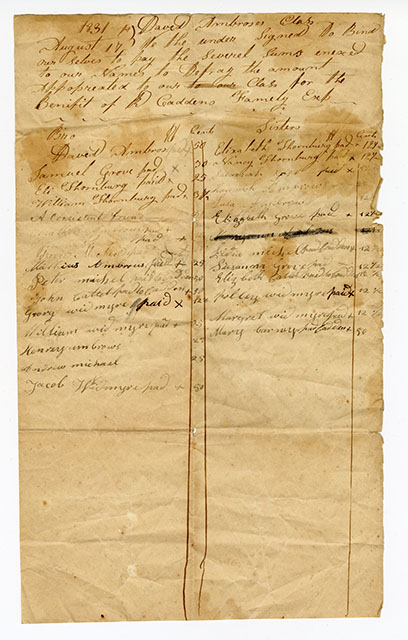 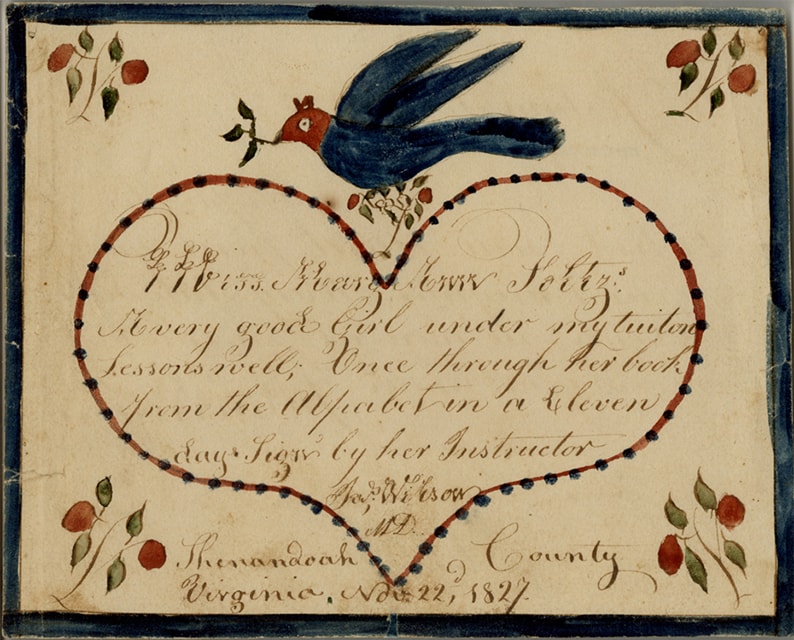 Reward of Merit Ticket made for “Miss Mary Ann Foltz” by James Wilson, Shenandoah County, Virginia, 1827. Inscribed: “Miss Mary Ann Foltz / A very good Girl under my tuition / lessons well; Once through her book / from the Alphabet in a Eleven/ days. Signed by her Instructor / James Wilson / MD / Shenandoah County / Virginia Nov 22d 1827”. Ink and watercolor on paper. Collection of the Museum of the Shenandoah Valley, 2008.0005.4. 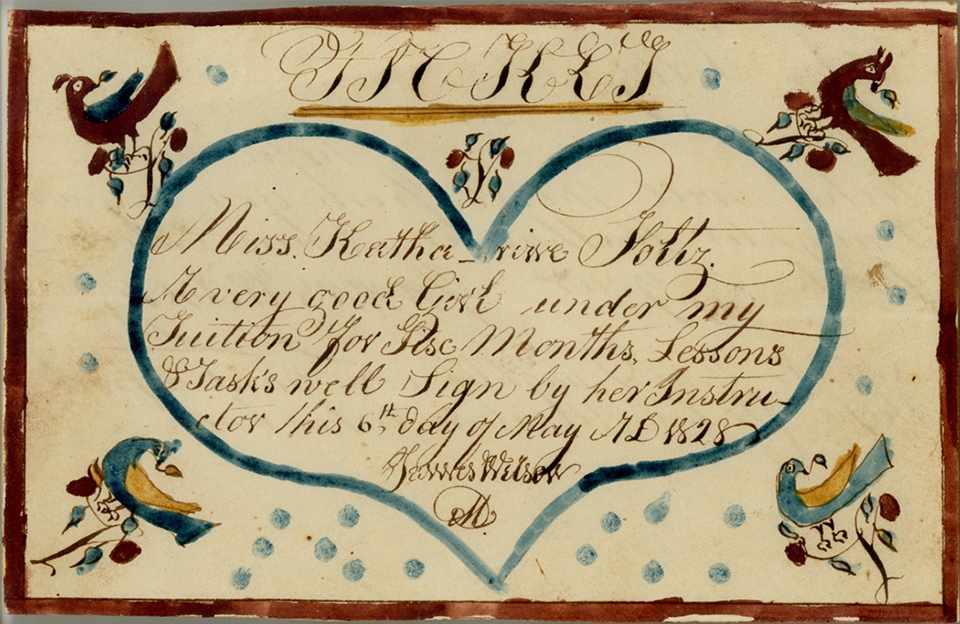 Front of a Reward of Merit Ticket made for “Miss Katharine Foltz” by James Wilson, Shenandoah County, Virginia, 1828. Inscribed: “Miss Katharine Foltz / A very good Girl under my / Tuition for Five Months Lessons / & Tasks well Sign by her Instru- / -ctor this 6th of May AD 1828 / James Wilson”. Ink and watercolor on paper. Collection of the Museum of the Shenandoah Valley, 2008.0005.2. 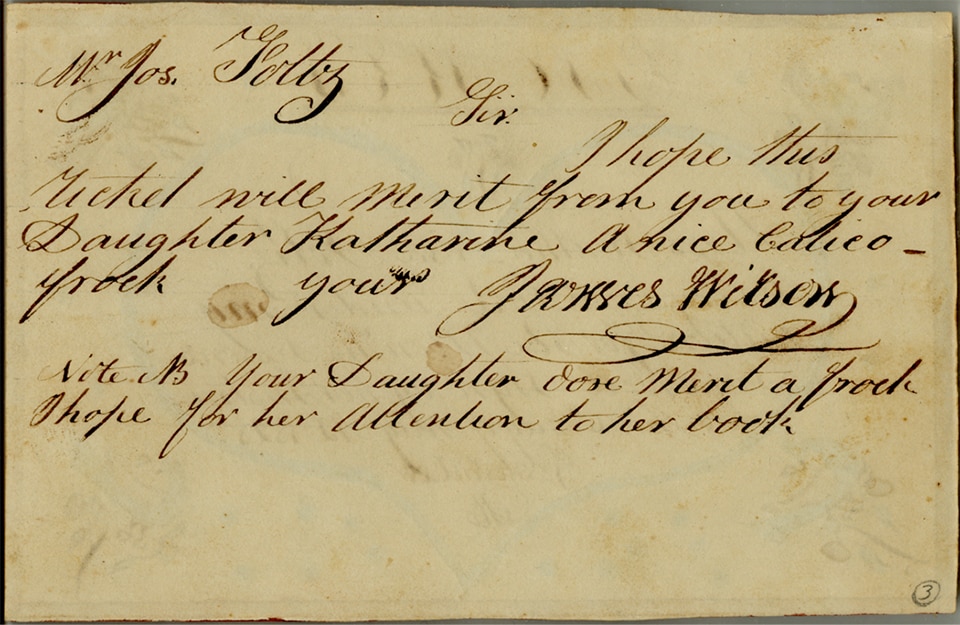 The back of the Ticket illustrated in Figure 4, illustrating schoolteacher and artist James Wilson’s note to Katharine’s father Joshua Foltz Sr. 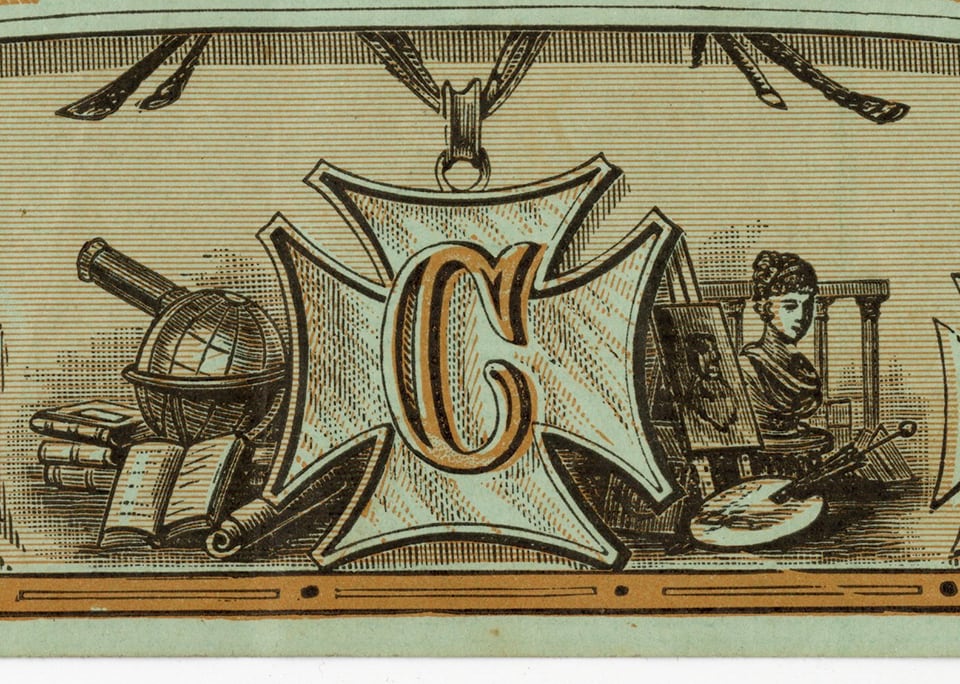 Detail of the symbols of a classical, liberal arts education found on the reward of merit bill illustrated in Figure 6. 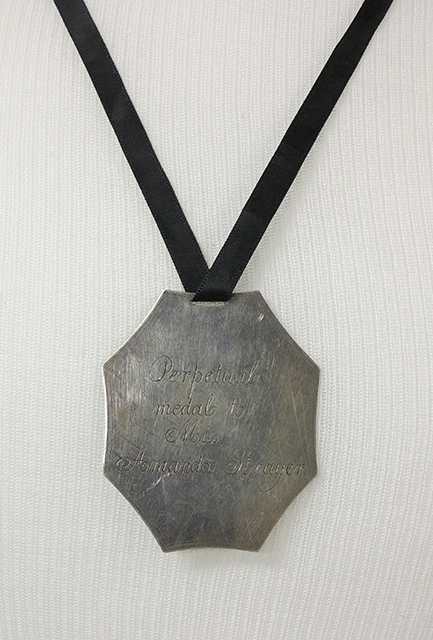 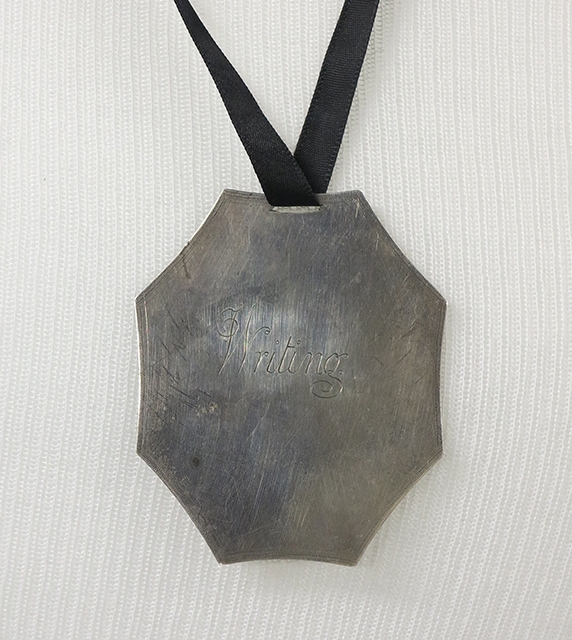 Reverse of the medal illustrated in Figure 8. 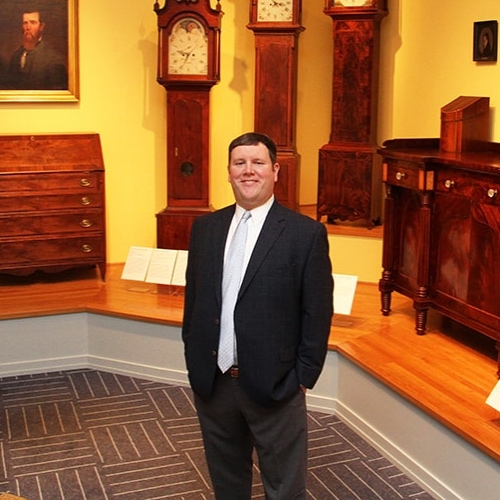