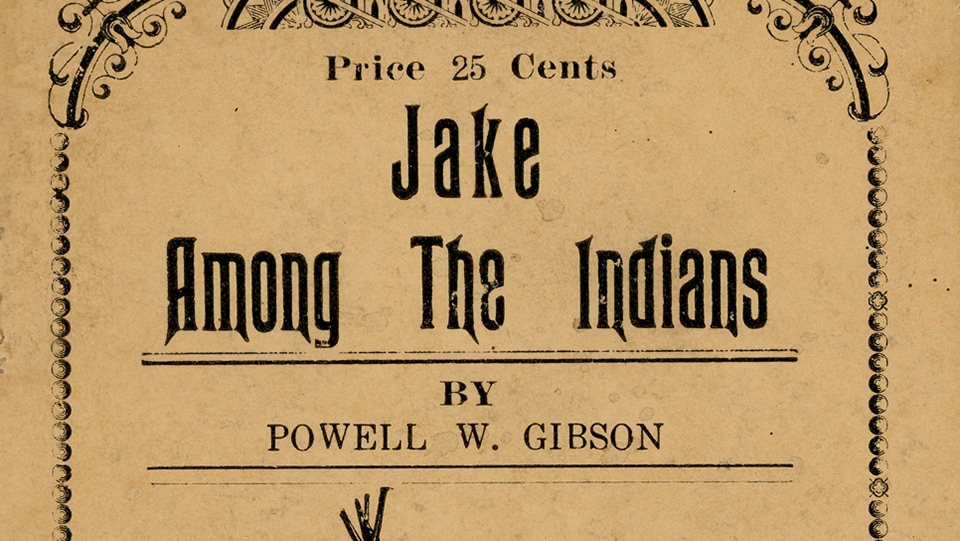 Powell W. Gibson (1875-1959) is best remembered in Shenandoah Valley history as the principal of the segregated Douglas School in Winchester for a quarter of its nearly century-long history.

Later this month, Winchester historian Judy Humbert will share some of her recollections of the Douglas School that Gibson helped build in the second of the MSV’s new Lunch & Learn series. 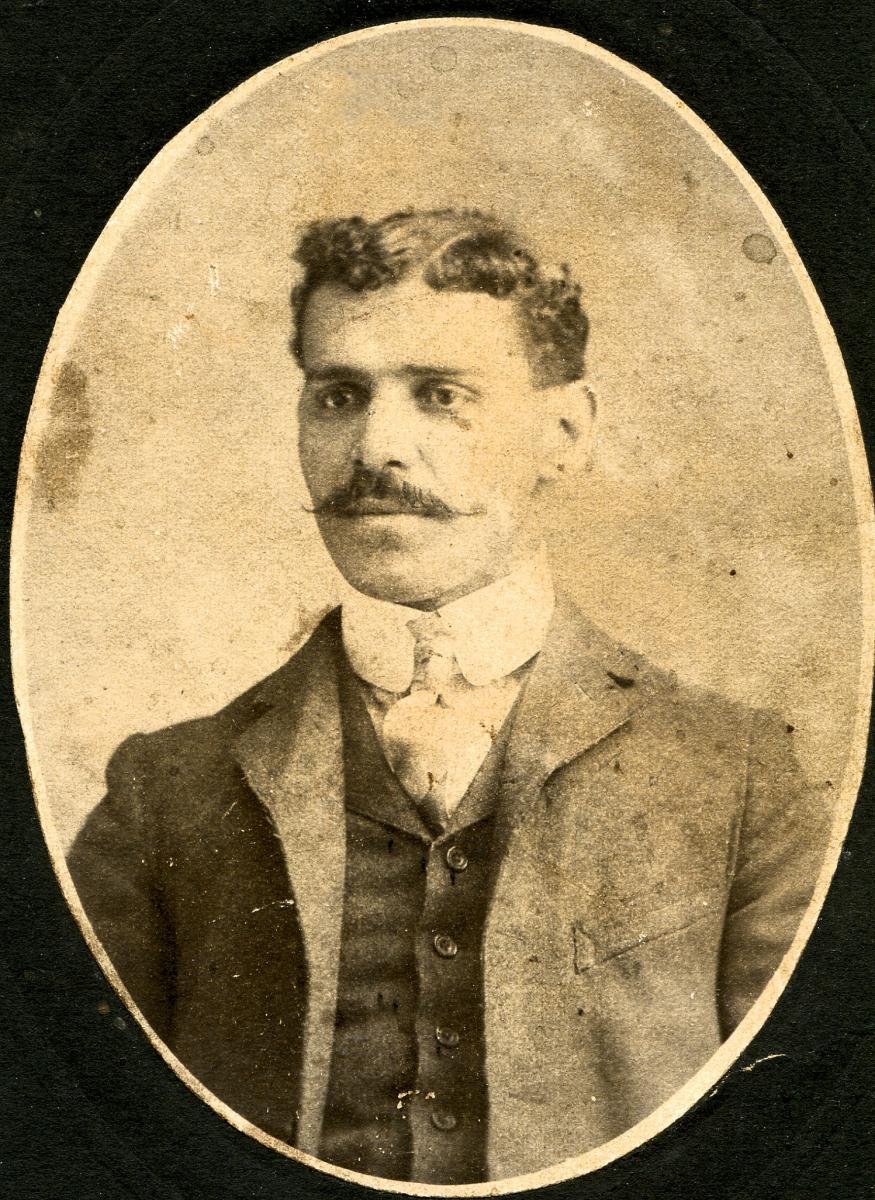 For this month’s blog, I would like to focus on one aspect of Gibson’s life that is not as well known. In addition to being an educator, he was also a playwright and author of poems. Last year, the MSV received an object that speaks to this part of Gibson’s life, a rare copy of a playbook for his 1931 production: Jake Among the Indians. 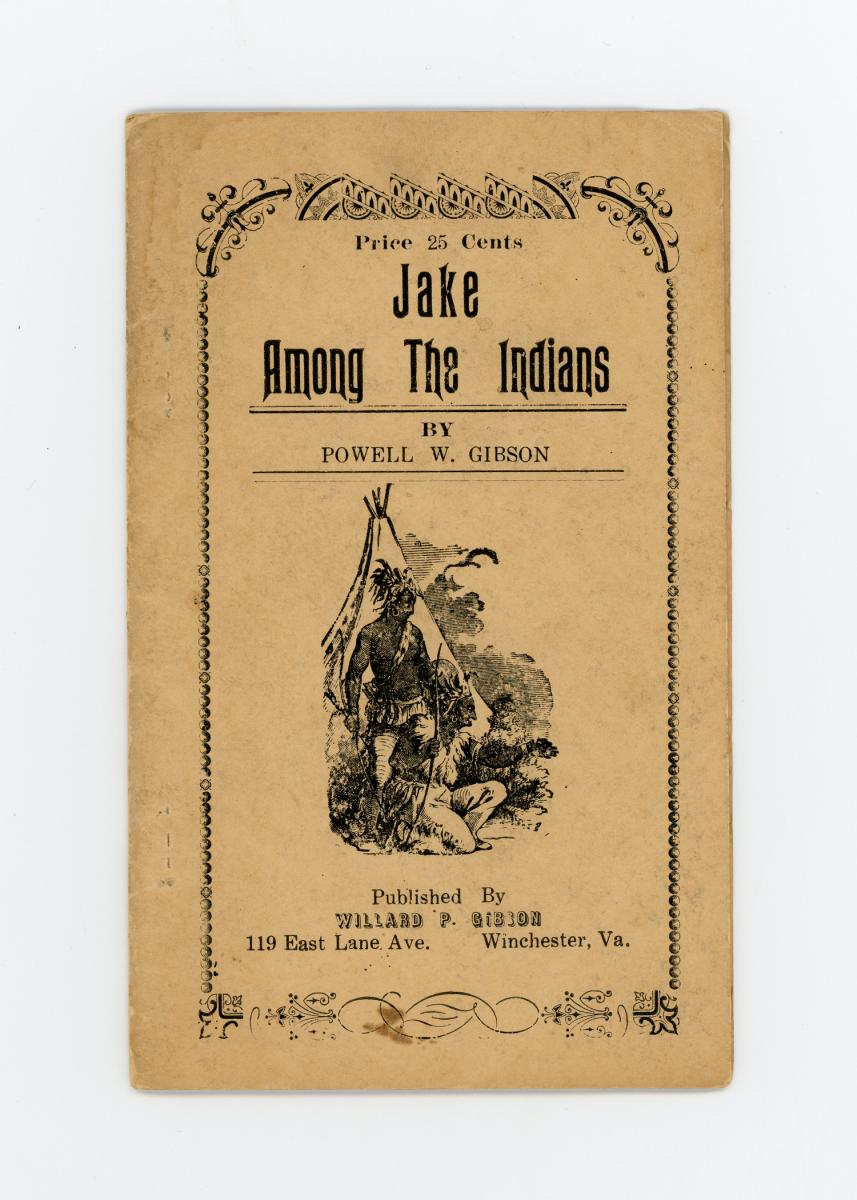 Born in 1875 in Middleburg, Virginia, Gibson grew up valuing education and the possibilities it afforded. Like many African Americans of his time, Gibson’s local opportunities for education extended only through grade school. Undeterred, he moved to Washington, D.C. to pursue secondary education. After attending multiple institutions, Gibson began his career as an educator by serving as the principal of the Brown School in Manassas, Virginia and later supervised schools in Kent County, Maryland.[i]

Gibson arrived in Winchester in 1916 to take over the Winchester Colored School following the retirement of Reverend J. H. Quiett (1859-1934). At the time, the school operated out of Old Stone Presbyterian Church on Piccadilly Street. One of Gibson’s first acts was to rename the institution Douglas School in honor of the pioneering abolitionist and author.[ii] 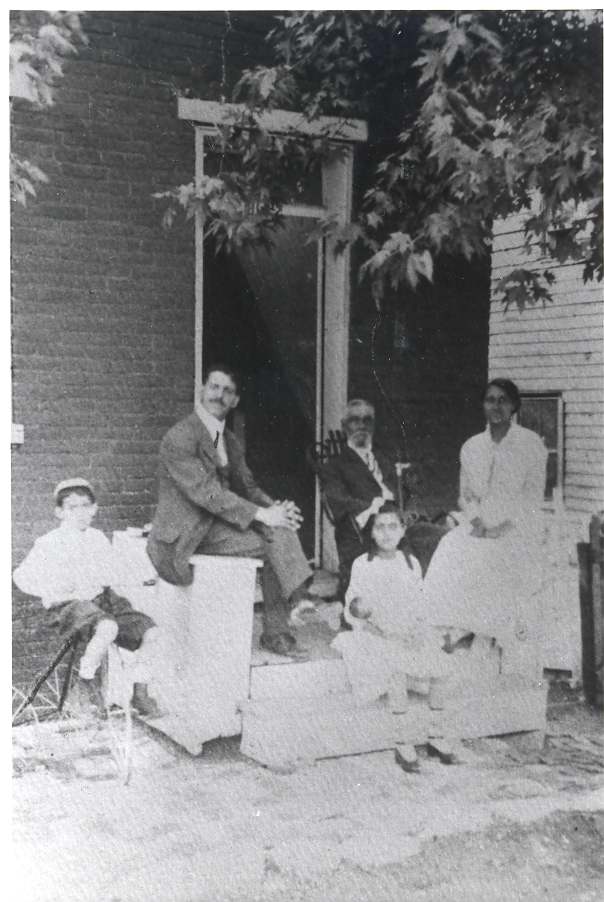 Gibson and his family settled at 119 East Lane. Behind the home, the principal’s son Willard P. Gibson (1909-1977) opened a print shop where, in the 1930s and 1940s, he published Winchester’s only black newspaper: The Virginia Informer. Willard also printed his father’s playbooks and accompanying materials including 1931’s Jake Among the Indians.[iii] 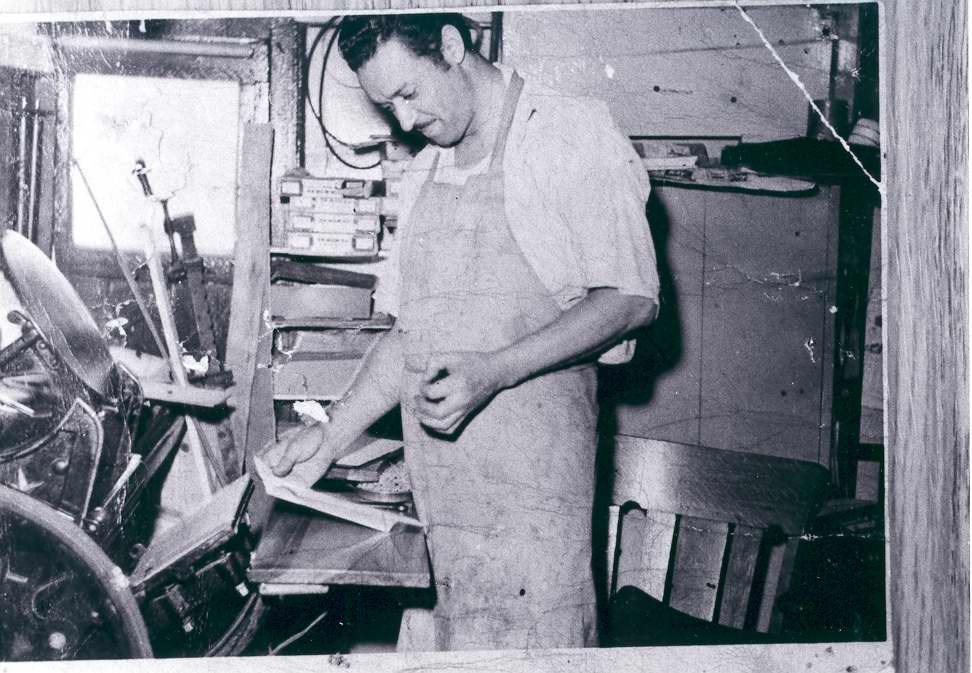 Jake Among the Indians featured a classic star-crossed-lovers story with a “Wild West” twist. At the play’s outset, Red Rose—daughter of Sioux chief Red Cloud—declares to her father her love for a white cavalry officer, Major Lloyd. The play follows the lovers’ attempt to elope together, with the help of the titular Jake (a “Funny boy from Alabama”) and daunted by Red Rose’s incensed father.

Not surprisingly, many of the characters in Jake Among the Indians embody the biases of the early 1900s. Red Rose—yearning to join “civilized” American culture—is depicted as articulate and reasoned. Contrastingly, the unrelenting Red Cloud (probably based in part on the Oglala Lakota leader of the late 1800s) comes across as savage and violent. Ultimately, Red Rose and Major Lloyd escape and ride into the sunset accompanied by a rendition of “The Star Spangled Banner.” 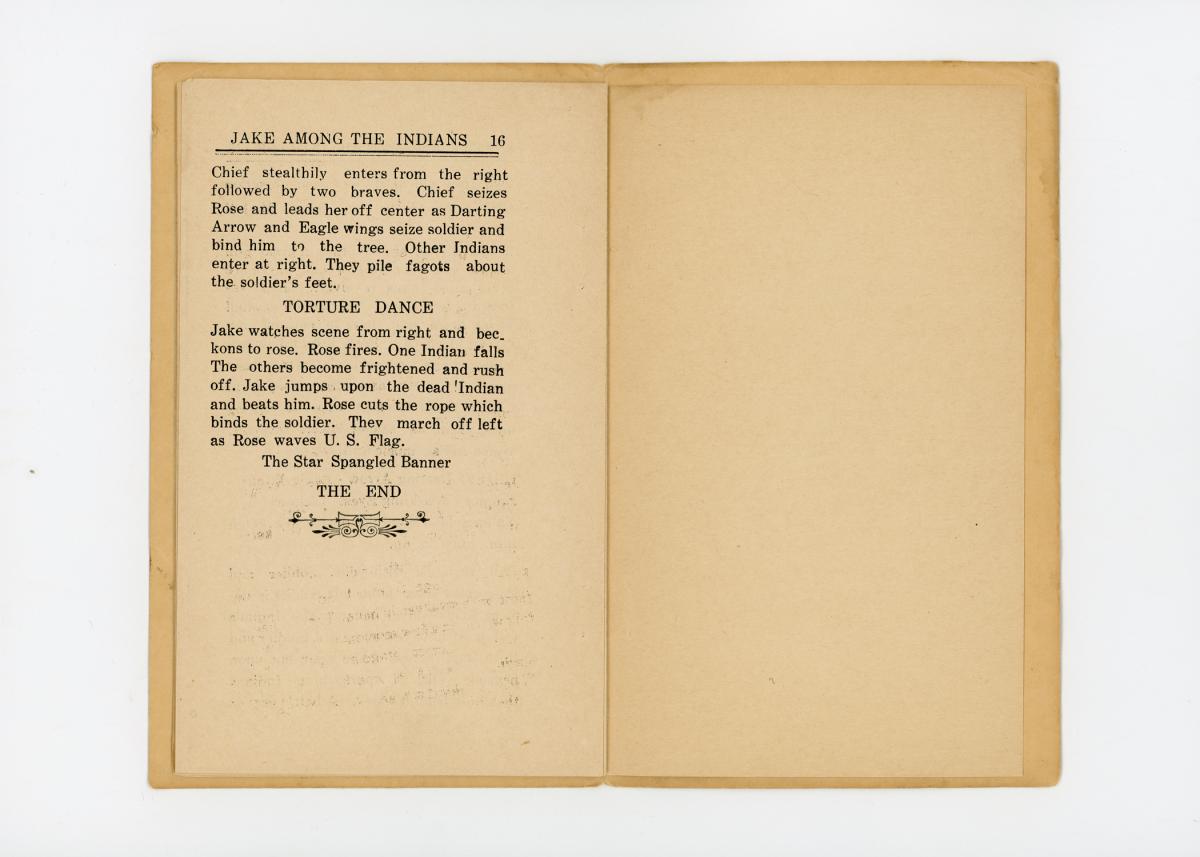 Fig 5. Detail of the playbook illustrated in Figure 2 revealing the play’s ending.

Jake Among the Indians is actually one of two plays Gibson authored while principal of Douglas School. The other, King of the Mandingoes, debuted ten years earlier in 1921. To modern audiences, the word “Mandingo” has developed racist connotations. The use of the term in the 2012 Quentin Tarantino film Django Unchained comes to mind. But historically, the word has referred to the Mandinka people of West Africa. Descendants of the Mali Empire, members of the Mandinka ethnic group today can be found in the countries of Mali, Guinea, Ivory Coast, Sierra Leone, and Liberia, among others.

According to a playbill for King of the Mandingoes, the plot follows three American officers in Liberia searching for missing missionaries. In the process, the protagonist Twala—a native guide accompanying the officers—proves to be the rightful king of his people.[iv] Through the play’s theme and its elaborate costumes, Gibson no doubt intended for his students to reconnect to and find pride in their African heritage. 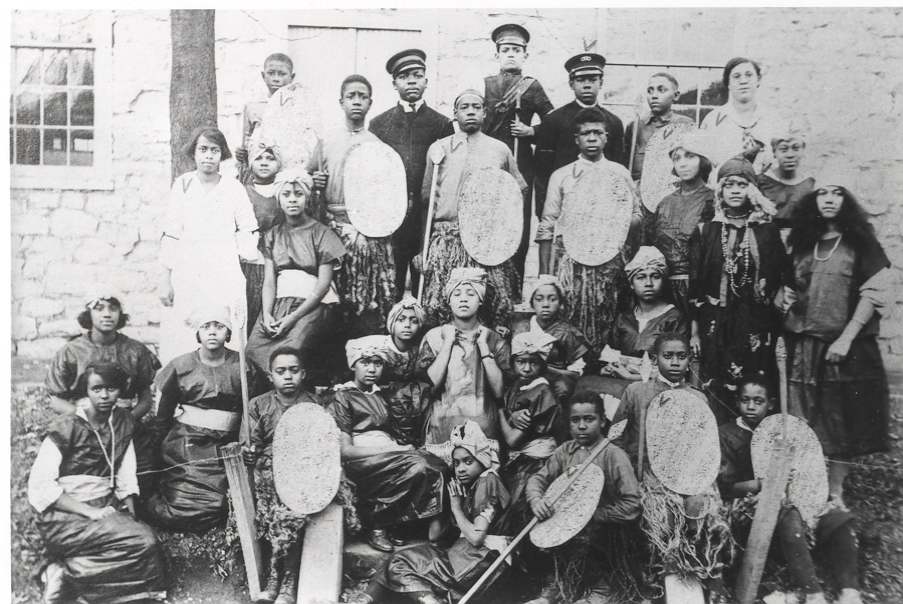 Fig 6. Students posing in costume for the play King of the Mandingoes outside of Old Stone Presbyterian Church around 1921. The church was home to the Douglas School from 1916 until a new school building on North Kent Street opened in 1927. Courtesy Stewart Bell Jr. Archives, Handley Regional Library, Winchester, VA, Blanche Moten Collection, 203-6a thl.

Gibson’s choice of a regal African theme also might have been a veiled rebuttal and act of resistance against the reemergence of the Klu Klux Klan in 1920s America. The release of the silent film The Birth of a Nation and the burning of a cross on top of Stone Mountain, Georgia—both in 1915—propelled the hate group back to prominence in the twentieth century. 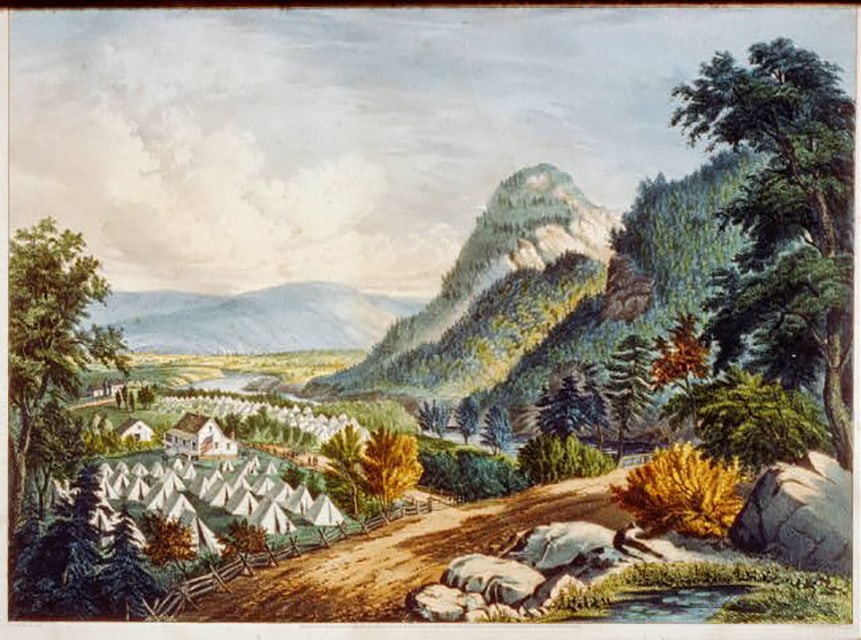 But unlike the Klan of the Reconstruction era, the new organization adopted a “true American” rhetoric that condemned not only blacks but also Catholics, Jews, and immigrants of all backgrounds. The “Invisible Empire” tried to reinforce its racist message by sponsoring aspects of public life like picnics, concerts, and even baseball teams. Surviving photos testify to the presence of the Klu Klux Klan in Winchester during this period, marching in public without hoods. 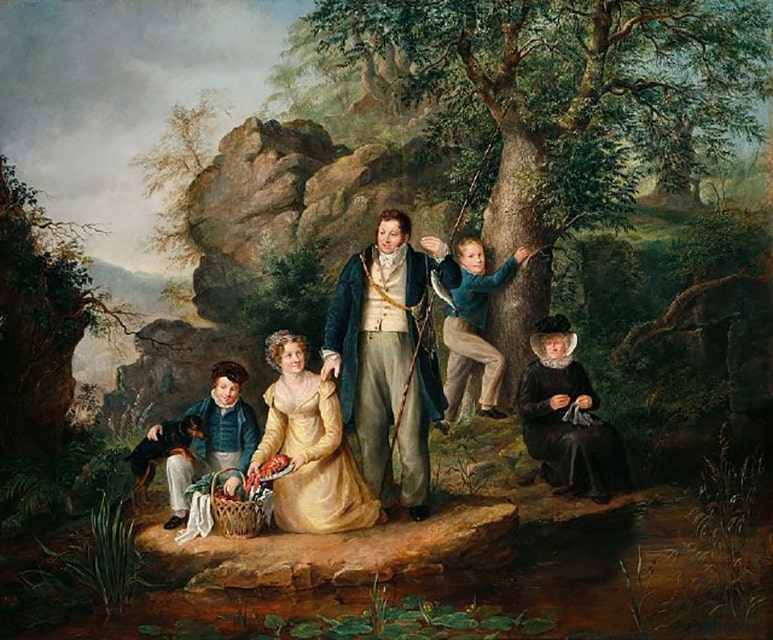 In mounting a play that reinforced themes of African exceptionalism, Gibson empowered his students to stand tall in the face of mounting white supremacy. Later generations of Douglas School students would bravely begin desegregating Winchester schools in the 1960s. But for Gibson’s students standing on stage during that Friday night in February 1921, the play elevated them to the status of kings and queens of Africa.

[ii] Ibid, 1-2, 28-29. Gibson chose a spelling that included only one “s,” rather the more common spelling of “Douglass” used during the abolitionist’s lifetime.

[iii] For more information on the Gibson house and print shop as well as other sites related to African American history in Winchester, see the brochure “African-American Heritage: A Self-Guided Driving Tour” published by the Local Black History Taskforce at the Handley Regional Library. Copies of the brochure are available at historic and tourism sites throughout the area, including the Museum of the Shenandoah Valley.