Believe It or Not: Bill Cook’s “Big Basket”

This year marks 250 years of Shenandoah County history. Originally founded in 1772 as Dunmore County—named for John Murray, 4th Earl of Dunmore and Virginia’s last colonial governor—Shenandoah County is centrally located in the Valley and is home to some of its most iconic viewsheds. Having grown up in the area, I am still stopped in my tracks by the sights of and from Signal Knob on Massanutten Mountain.

Shenandoah County has also produced generations of craftspeople, artisans, and artists. Their impact is present throughout the MSV Collection in the form of furniture, textiles, paintings, ceramics, whimsies made just to delight the eye, and more. But one object—a recent gift to the MSV—literally and figuratively stands above the rest. At 76 inches tall from base to mouth and 31 inches in diameter at its widest point, Bill Cook’s basket on base is one of the largest Shenandoah Valley white oak baskets ever made (Figure 1). It currently greets visitors as they climb the front stairs to the Museum’s second floor galleries.

A fifth-generation craftsman, Bill Cook (1932-2018)—called “Wild Bill” by those who knew him—came from a storied basketmaking family. Perhaps the most well-known members of Cook’s family were his aunt and uncle, Lucy May Dodson Cook (1909–1989) and William “Cody” Cook (1904–1991) of Madison and Page Counties. Upon marrying in 1924, the couple began learning basketmaking from Cody’s mother Lucy Margaret Nicholson Cook (1870–1938). In 1965, the Cooks began supplying Colonial Williamsburg with white oak baskets and taught a generation of interpretive craftspeople whose own work is valued today, like Leroy “Roy” Black (1940–2021).[i] As their success mounted, the Cooks engaged other members of the family to help keep up with the demand from Williamsburg’s visitors.

By at least age seven, Bill Cook was following in the family tradition of weaving baskets (Figure 2).[ii] The inspiration for Cook’s oversized basket, though, came many years later and from an unlikely source. While teaching a basketmaking course sponsored by Cedar Lakes Craft at Davis & Elkins College in West Virginia in the 1970s, Cook was asked by a student why no one had made an overly large basket. The master basketmaker decided to rise to the challenge.

Cook began with a sketch, taking a form that his Nicholson relatives favored—a feather basket used to collect the feathers while plucking a chicken—and stretching it (Figures 3-4). Cook sourced the white oak from three different locations: a farm in Elkins, West Virginia, an unidentified location near Cumberland, Maryland, and the property of Mr. Elmer DeLawder west of Mount Jackson, Virginia.

Cook’s efforts to source wood from three disparate locations illustrates the challenges basketmakers faced by the late 1900s. Until the 1950s, U.S. Forestry Department staff working on federal land in the Shenandoah Valley happily marked trees to fell for basketmakers as part of forest conservation; preventing young trees from crowding old ones promoted healthy growth. But policies changed, forcing basketmakers to turn to private landowners who often found that they achieved better prices by selling to lumbermills.[iii]

Despite such challenges, once Cook began weaving the basket in the workshop behind his Toms Brook home in northern Shenandoah County, he “got lost” in the process.[iv] The basket took him somewhere between 60 and 66 hours to weave. But upon completion, Cook discovered a problem: the basket was too big to leave his small workshop. Cook and a few helpers eventually resorted to removing a window, its frame, and a number of surrounding cinder blocks to safely remove it. Finding that the basket was a bit unsteady on its own, Cook wove a separate base to support it in 1976 (Figure 5).

Over the years, Bill Cook carried the basket to craft shows from Virginia to Ohio. In addition to Cook’s regular sales, the basket brought in income when passersby would toss coins into the top. Cook claimed that at one show in Virginia Beach, so many coins had been deposited that by the end of the day he couldn’t lift the basket! The master basketmaker even wrote to the Guinness Book of World Records about his masterpiece, but to his chagrin was told that they had nothing with which to compare it.

For centuries, white oak basketmaking in the Valley was largely a necessity for farm work and life: providing baskets for gathering nuts, other food, and flowers; washing laundry; carrying coal; and the like. But in Bill Cook’s hands, a traditionally utilitarian craft became a sculptural art form. Other Valley basketmakers have explored similar themes. Clyde F. Jenkins—a Page County native and fellow basketmaker now working in Shenandoah County—weaves palm-size whimsical white oak acorns purely for the joy they inspire (Figure 6).

The shift in usage has in some ways followed closely behind or alongside shifting perceptions of contemporary basketmakers themselves. While being interviewed by a local newspaper Cook—then in his 71st year—reflected on the changes he witnessed in his lifetime: “It’s amazing, [when] I was young kid, if you were a basket maker, you were a hillbilly…I’ve seen the times change, where now you can just name what you want to do, your price and everything else.”[v] The times may have changed, but the fondness our visitors and staff have expressed for Cook’s extraordinary piece of Shenandoah County material culture has not (Figure 7).

As mentioned earlier, Bill Cook’s basket on base is currently on view in the second-floor gallery lobby. Events celebrating Shenandoah County’s 250th anniversary continue throughout the year. Details and an events calendar can be found at https://sc250.org/.

[iv] The MSV is very appreciative of donors Kelly and Phyllis Coffelt for not just gifting the basket, but also interviewing Bill Cook about the history of it in February 2010. Many of the anecdotes discussed in this blog are thanks to their stewardship. A copy of the 2010 interview is retained in the MSV Object Files. 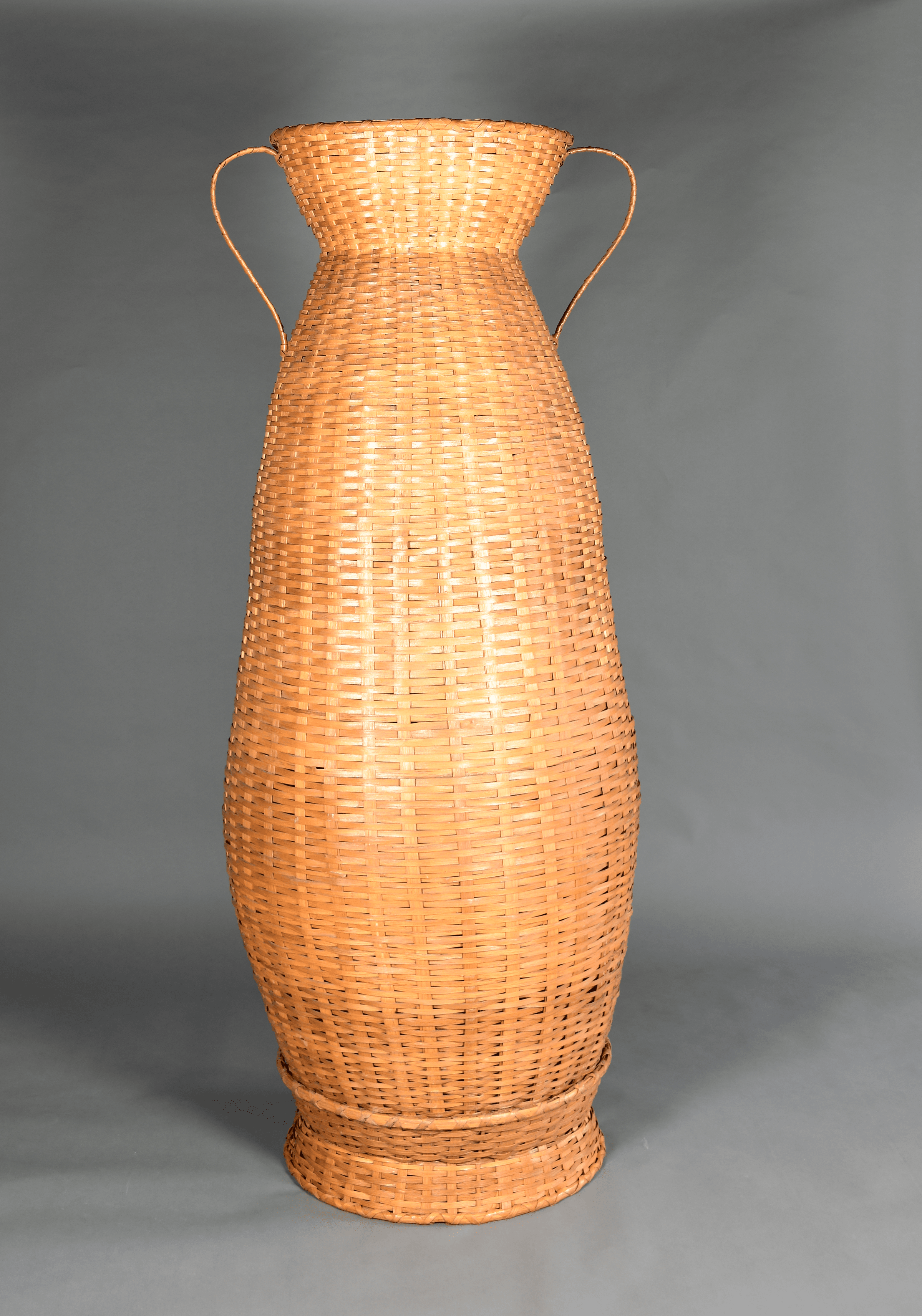 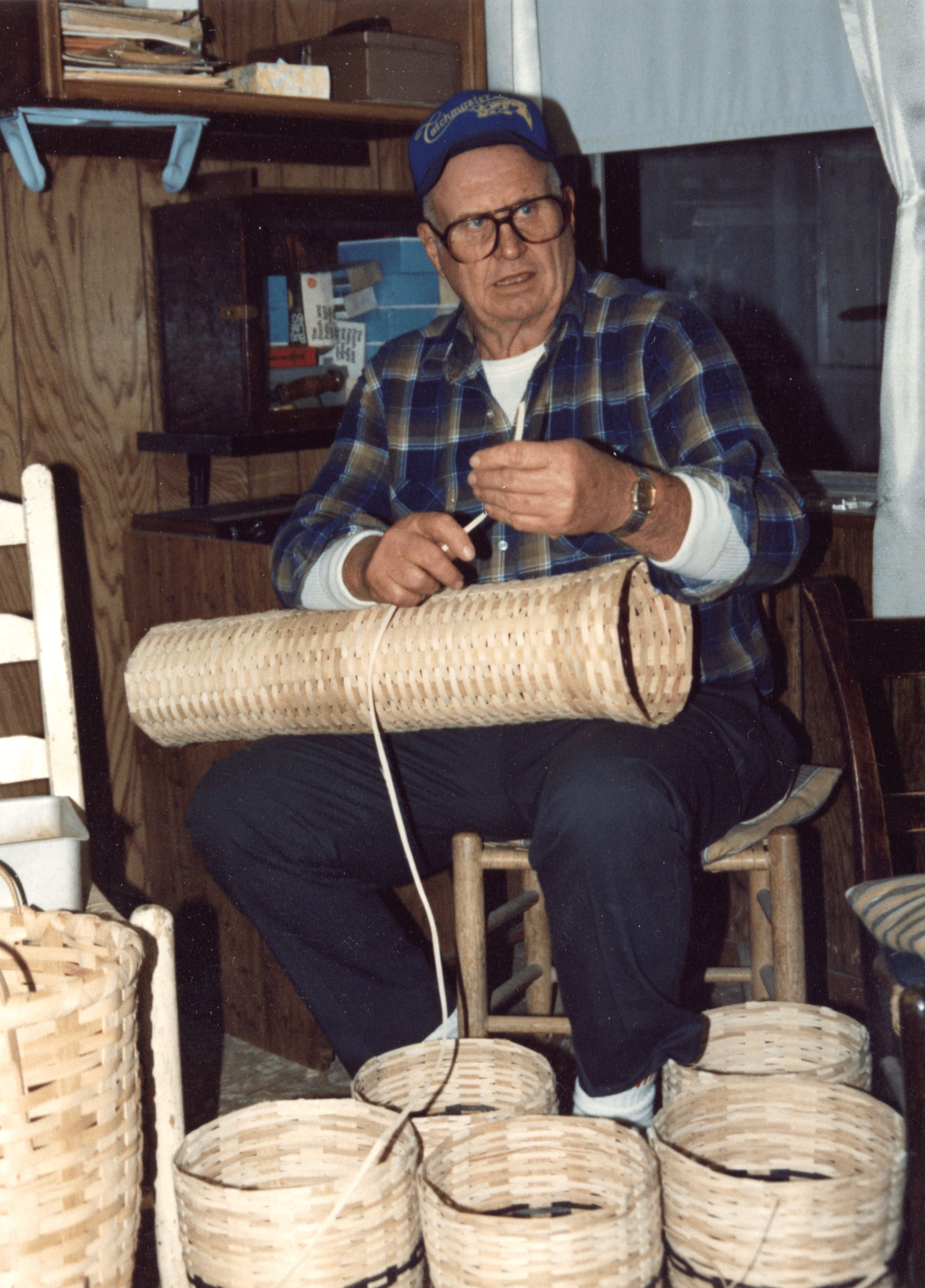 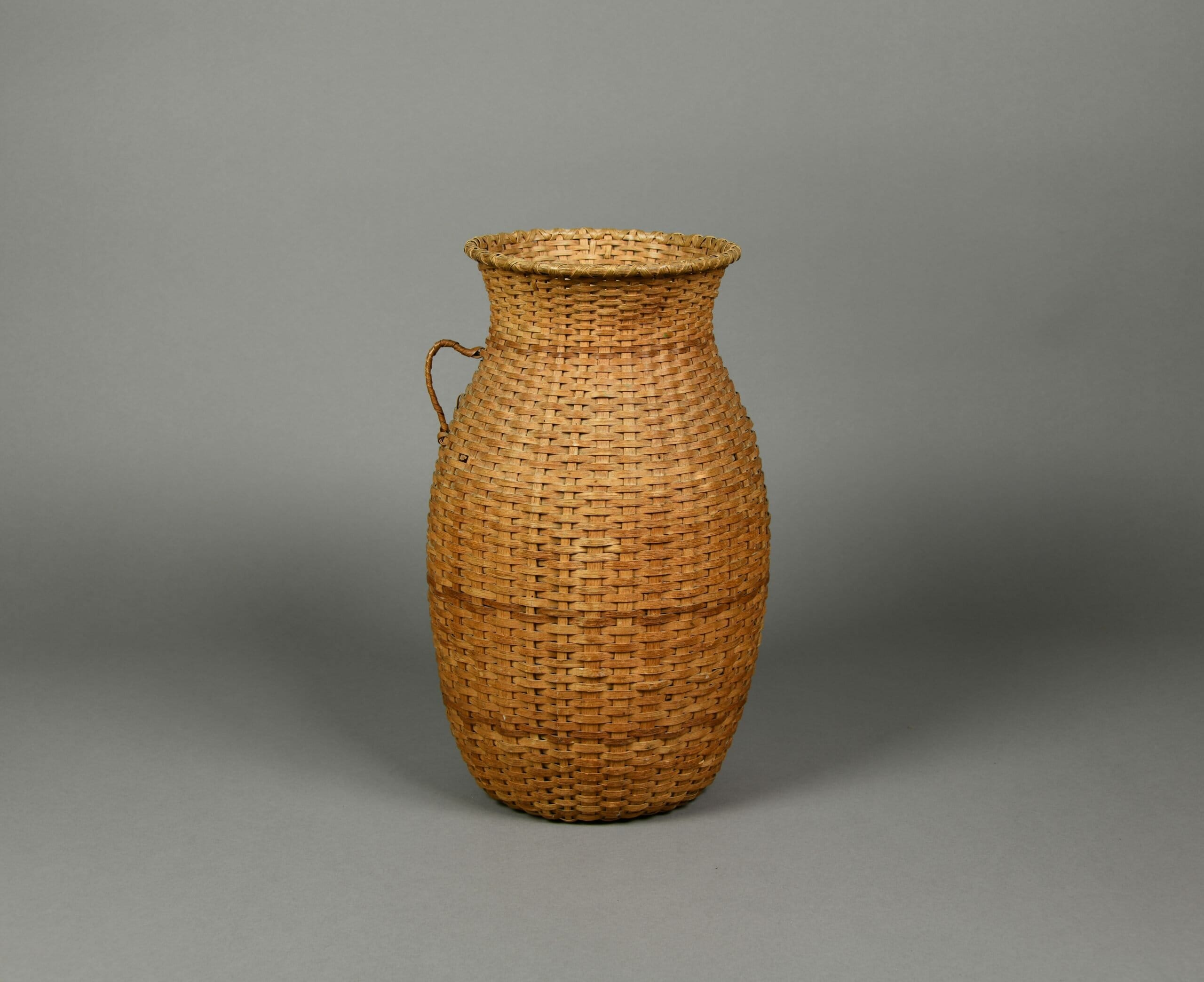 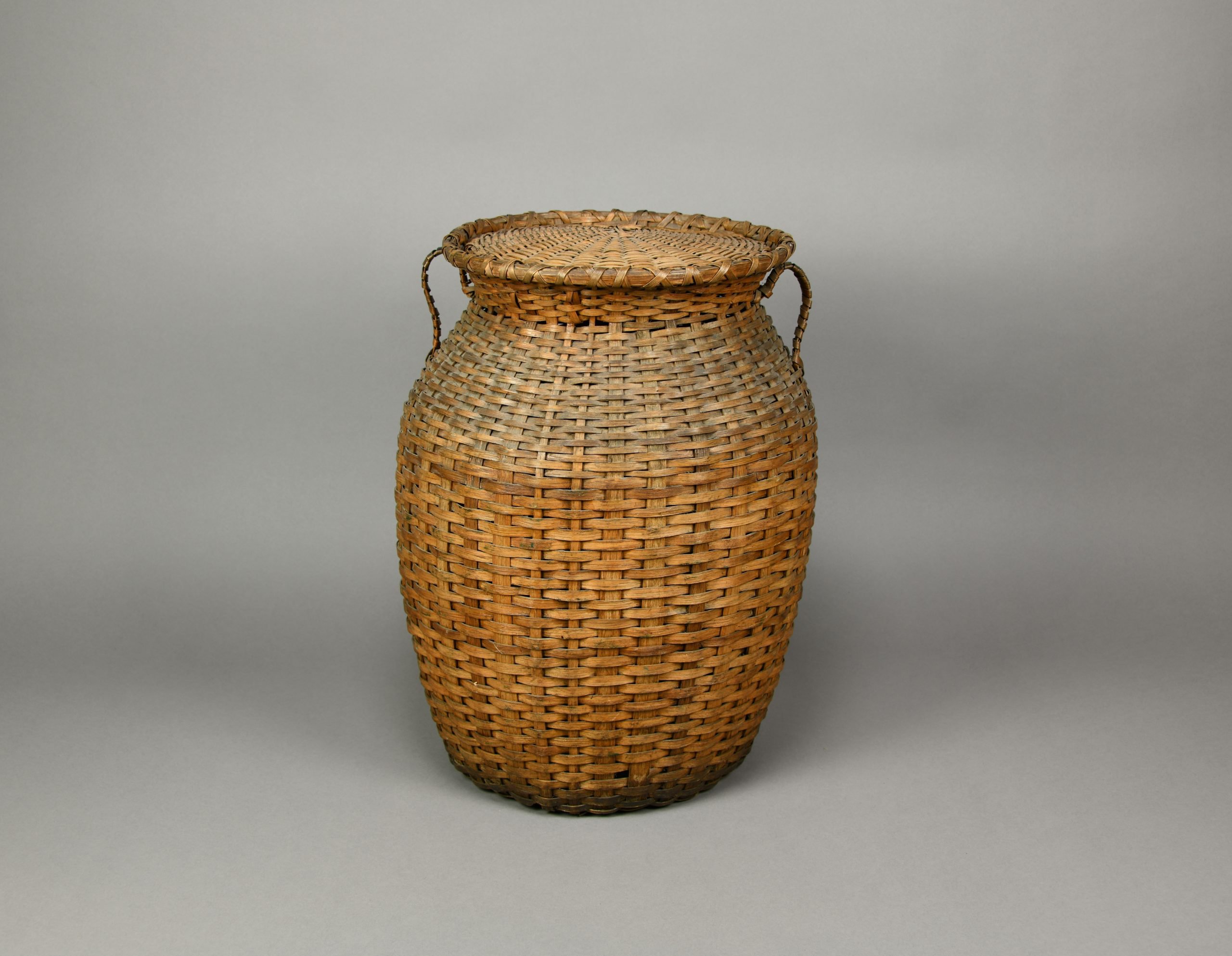 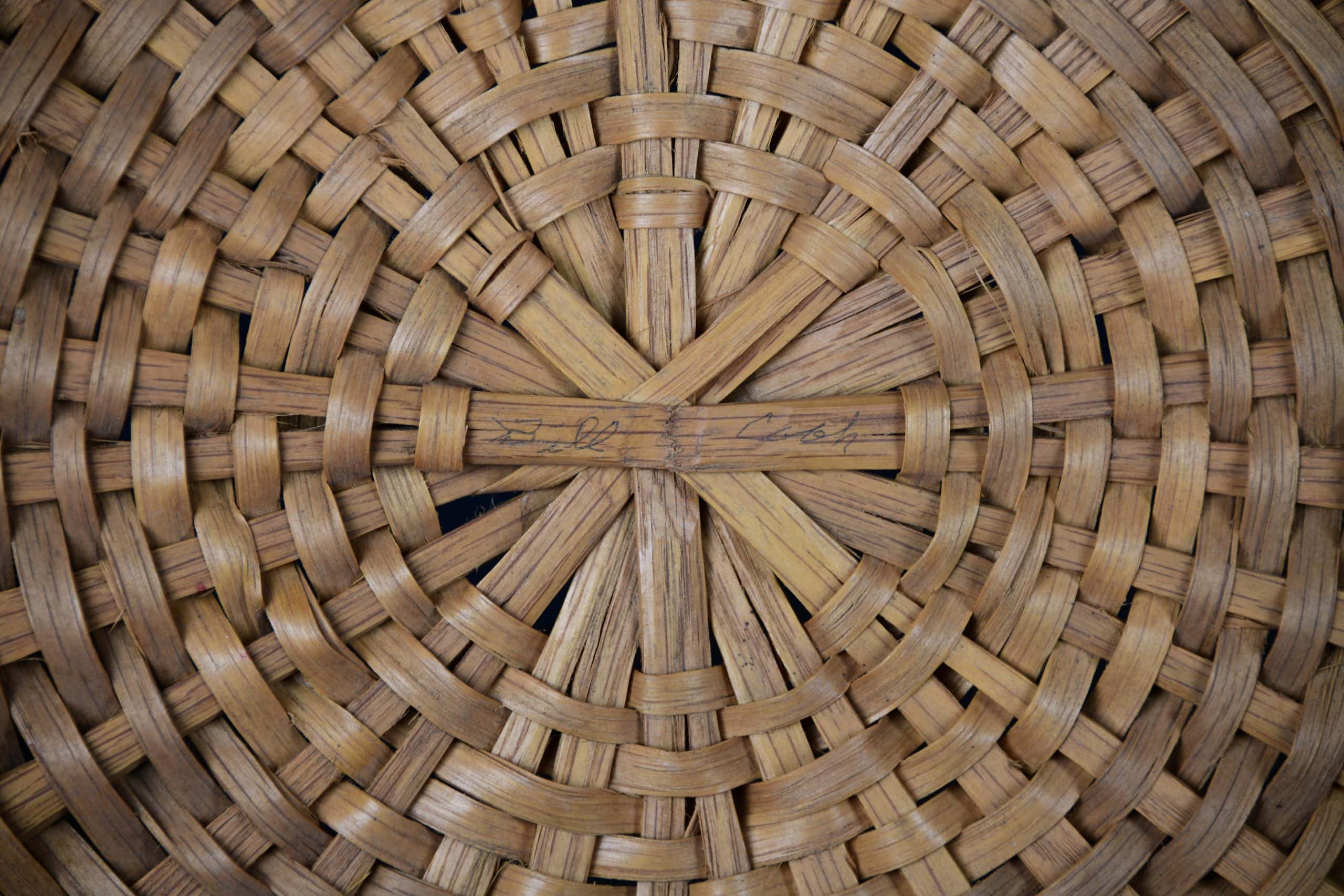 Fig 5. Detail of Bill Cook’s signature (one of two) on the detached base he created for the Basket on Base in 1976. Photo by Lauren Fleming. 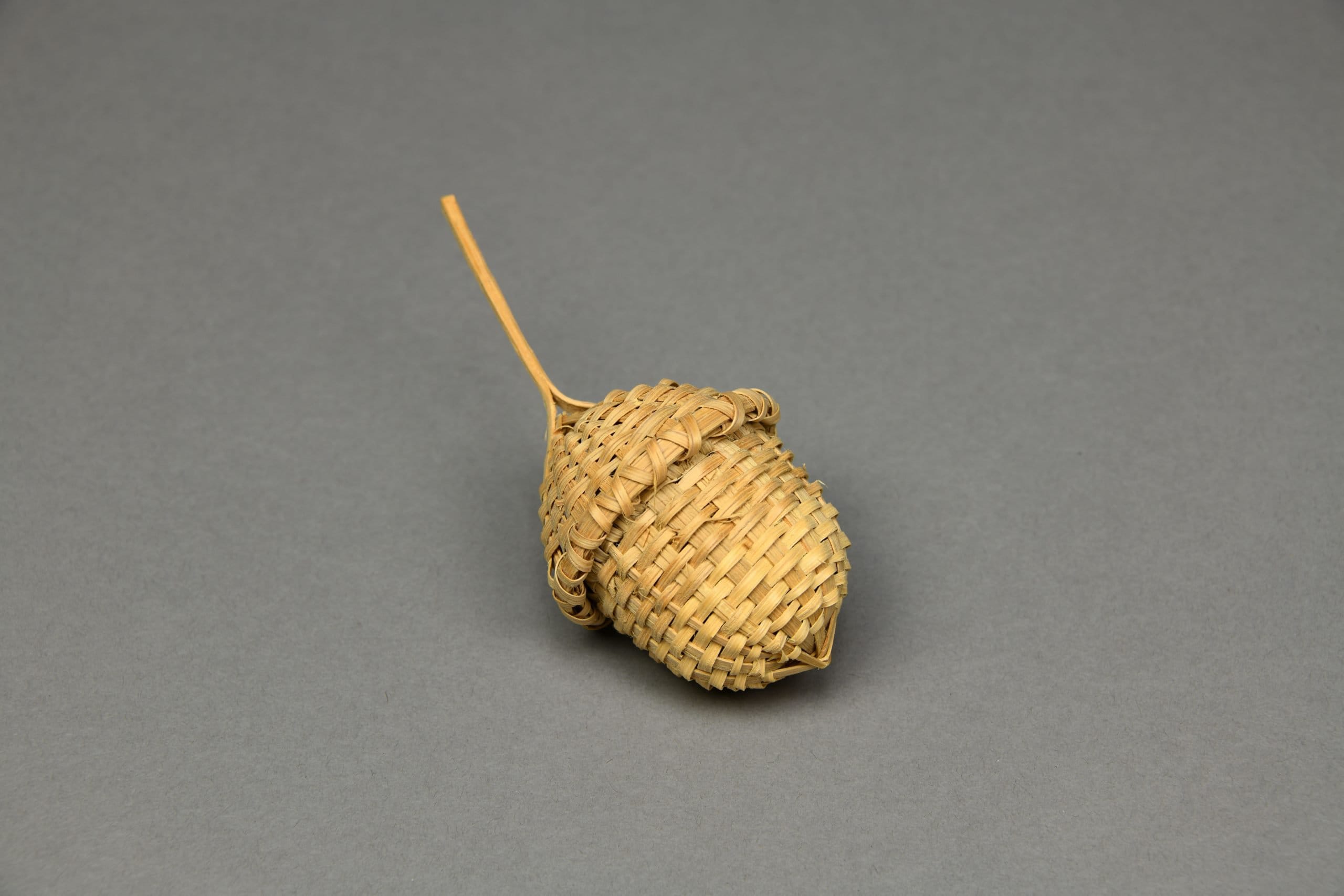 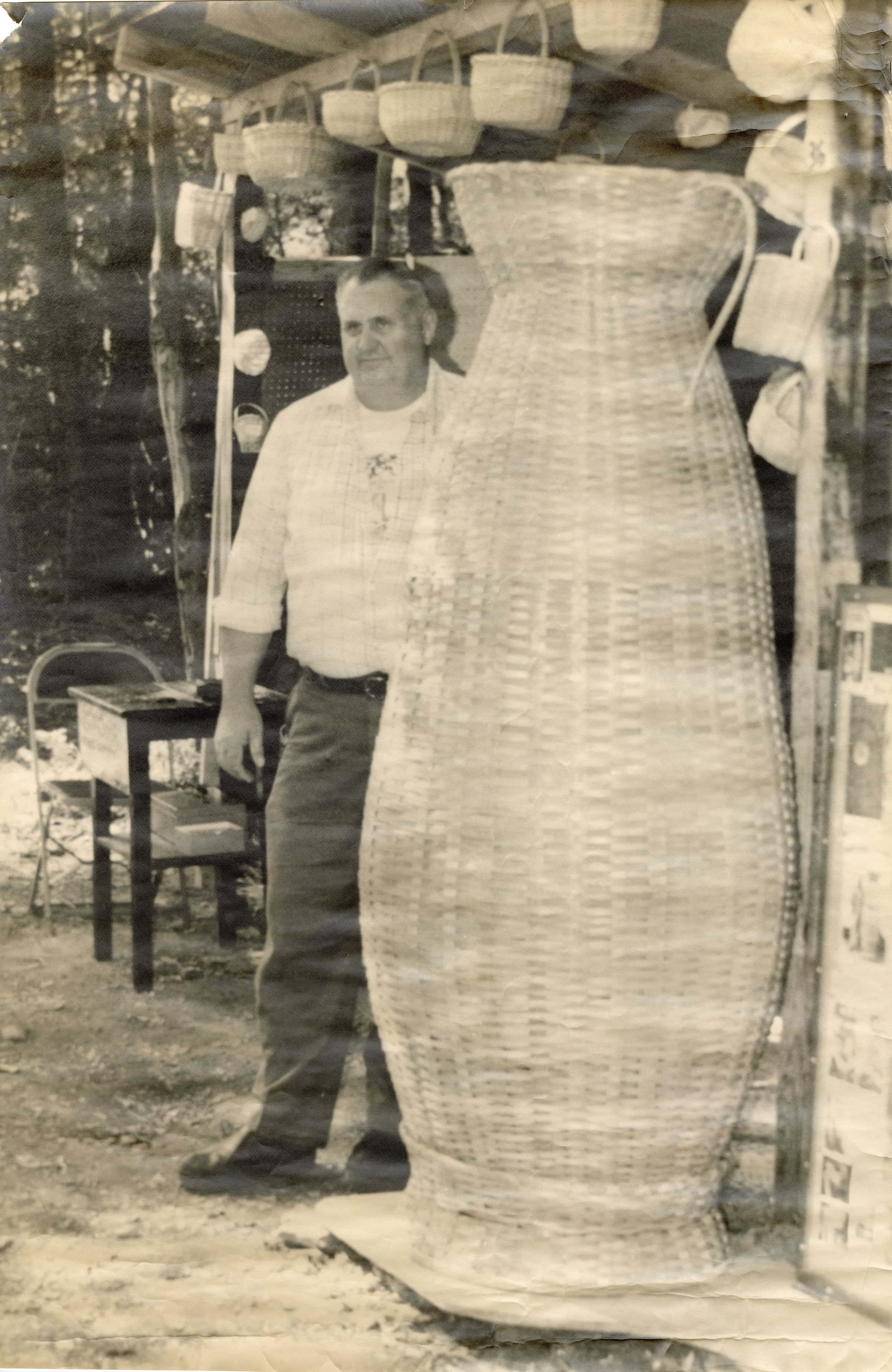 Fig 7. Bill Cook posing with the basket on base, possibly at a craft fair sometime in the 1970s or 1980s. Note the other basket forms Cook produced hanging along the rafter and walls of the stand. Photo courtesy of Kelly and Phyllis Coffelt.