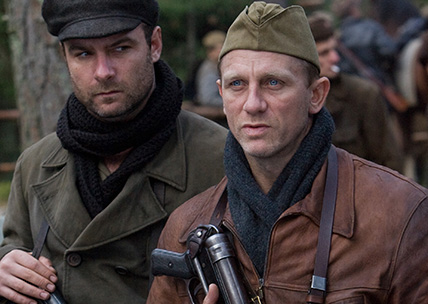 11 a.m. Movie will be Followed by a Visit to the MSV Where Daniel Craig’s Defiance
Costume is on View in CUT! Costume and the Cinema Exhibition

Tickets to the film are just $10 and include an afternoon visit to Winchester’s Museum of the Shenandoah Valley (MSV) where the costume worn by Defiance star Daniel Craig is on view in the exhibition CUT! Costume and the Cinema. Proceeds from the movie will benefit the MSV.

Inspired by a true story, Defiance (2 hours, 17 minutes; R) tells the tale of three Jewish brothers in Belarus who successfully defied the Nazis in World War II by taking refuge in the forest and maintaining a self-contained society that grew to include more than 1,000 members and was the war’s largest and most successful group of Jewish resisters. Directed by Edward Zwick and released in 2008, the film stars Daniel Craig, Liev Schreiber, and Jamie Bell.

Following the movie screening, attendees are invited to drive to the MSV to see two leather jackets worn in Defiance by actor Daniel Craig. Included in the CUT! Costume and the Cinema exhibition on view in the MSV, the bomber jackets illustrate how Craig’s costume was changed over the course of the film. In all, the jacket was replicated six times. The MSV exhibition includes the pristine jacket worn at the beginning of the film and the final version of the jacket that was distressed to show two years of wear in the forest of Belarus.

On view in the MSV Changing Exhibitions Gallery through February 28, 2016, CUT! takes an in-depth look at the art of making costumes for period films. The exhibition displays 43 costumes depicting five centuries of style. Films represented in CUT! depict history, drama, comedy, fantasy, and adventure from the 1500s to the 1900s through costumes worn by such film stars as Johnny Depp, Kate Winslet, Heath Ledger, Emma Thompson, Robert Downey Jr., Anjelica Huston, and many others. In all, more than 30 actors and 25 films are represented, including Pirates of the Caribbean, Sense and Sensibility, The New World, Gosford Park, Sherlock Holmes, and The Phantom of the Opera. CUT! is organized by Exhibits Development Group, USA in cooperation with Cosprop, Ltd., London, England. The MSV display is sponsored by the Alamo Drafthouse Winchester and Shenandoah Country Q102.

The exhibition will be open until 4 p.m. on Sunday and the $10 movie ticket includes admission to the MSV and CUT! Costume and the Cinema. Food and beverages will be available for purchase at the Alamo. Those planning on attending Sunday’s screening may purchase tickets at the door or in advance at www.drafthouse.com/winchester/show/defiance. The Alamo is located at 181 Kernstown Commons Boulevard in Winchester.

The Museum of the Shenandoah Valley is located at 901 Amherst Street in Winchester, Virginia. The MSV complex—which includes galleries, the Glen Burnie House, and six acres of gardens—is open Tuesday through Sunday from 10 a.m. until 4 p.m. The Museum galleries are open year-round; the house and gardens are open April through October. Additional information is available at www.theMSV.org or by calling 540-662-1473, ext. 235. –END–