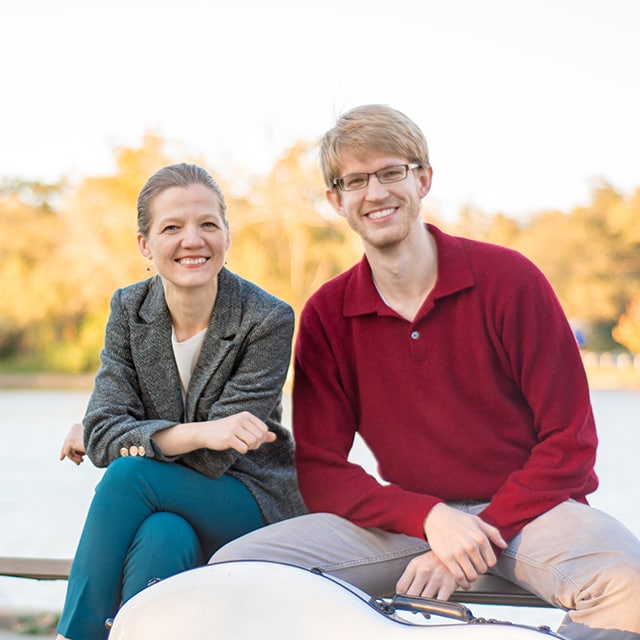 Lithuanian pianist Ieva Jokubaviciute has performed on major stages around the world, such as Carnegie Hall’s Stern Auditorium, London’s Wigmore Hall, and the Kennedy Center in Washington, DC. Her intricately crafted performances have led critics to describe her as possessing “razor-sharp intelligence and wit” (The Washington Post) and as “an artist of commanding technique, refined temperament and persuasive insight” (The New York Times). Labor Records released Jokubaviciute’s Alban Berg Tribute CD in 2010 and her latest recording, Returning Paths: Solo Piano Works by Janacek and Suk was released on the CAG label in 2014.

Cellist Schuyler Slack has performed in orchestral, chamber music, and recital settings across the United States, Canada, Europe, and Japan. A native of Alexandria, Virginia, he was appointed in the spring of 2016 to a core cello section position in the Richmond Symphony Orchestra after serving a one-year per-service position. He also performs frequently in the cello sections of renowned orchestras, including the Cleveland Orchestra and the Baltimore and National Symphonies. A devoted chamber musician, Slack has performed on some of the country’s biggest stages—including Carnegie Hall’s Stern Auditorium and the Kennedy Center—and given recitals at some of the country’s top music schools, such as the Eastman School of Music (New York) and the University of Michigan.

Tickets to salon performances—which include the concert, the wine-and-cheese reception, and admission to the house and gardens—are $20 per person for MSV Members and SU faculty. Tickets for students are $10. For all others, tickets are $30. Seating is limited; those interested in attending must purchase tickets in advance by calling 540-662-1473, ext. 240, or visiting www.theMSV.org.

The Glen Burnie Salon Series is organized by the MSV in partnership with Shenandoah University. The 2017 Salon Series is sponsored by AirPac and October’s performance by Ieva Jokubaviciute and Schuyler Slack is partially supported by the Virginia Commission for the Arts and National Endowment for the Arts.