15 Fun Facts About the Gardens at the MSV

In honor of the 15th anniversary of the MSV, here are 15 fun facts about the Garden.

When you enter the garden, you are coming in the back way.

The Gardens are not as old as you might think

​The original portions of Glen Burnie House were built in the 1790s. Because of the old stone walls, the stone and brick walks, and mature plantings many people think the gardens are just as old. But they are not. The gardens you see today were primarily developed between 1960 and the mid-1990s by owner Julian Wood Glass and his partner Lee Taylor. While many trees and some stone walls pre-date their arrival, most of the garden was conceived and developed during this time, with a few changes and updates made since.

The Grand Allee uses the idea of a forced perspective in its design.

There have been three versions of the Grand Allee.

​The original allee was planted with Kwanzan cherries in the 1960s, but they never did as well as hoped. Lee Taylor pulled them out in mid-1970s and replanted the allee with a pink flowering crabapple. These crabapples did very well, but by 2015 many of them had started to die, so we removed the dying and surviving trees and replanted the entire allee with a different variety of pink flowering crabapple known as Centurion.

​Most people know about the spring that is the headwaters of Town Run, which is located inside the circular stone wall just north of the house and at the western end of Kathie’s Spring Garden. And, of course, the spring house at the other end of the garden, near the old entrance, has a spring as well. However, during the excavation of the pond for Kathie’s Spring Garden, we discovered an additional 13 springs while digging. This required the use of several pumps to remove the water so we could continue to dig a hole to put water back in. Actually, all those springs continue to feed the pond and keep the water temperature a cool 60, even in the middle of summer.

Two gardens were designed to be best viewed from the second floor of the Glen Burnie House.

​Both the Parterre and the Knot Garden have designs that are better appreciated from above. The best spots to view them are from the second floor of the house. Unfortunately, because of fire code restrictions, access to the second floor is greatly limited and available only by appointment, so you will have to trust us and enjoy the photos.

​Each year, garden staff develop seasonal planting plans for both spring and summer displays. The spring displays include quite a few flowering bulbs from daffodils and tulips to small bulbs like grape hyacinths and crocus. Depending on the designs, we plant anywhere from 8,000 to 12,000 bulbs each fall.

Animal prints in the brick walkways

​Many of the brick walks were made from bricks recycled from old buildings being torn down around Winchester. Lee Taylor made sure many of the more interesting bricks were placed in the walks behind the house. Look for brickmaker marks and even a few animal prints as you stroll along the paths.

​Despite all the springs on the property, the water in the Water Garden is collected from Town Run and pumped to the garden in order to create a waterfall, which cascades down to feed the pond where all the golden mountain trout are found. The water then flows back into Town Run.

In the cemetery are numerous markers of the Wood and Glass family. Off to one side, you will notice a lone marker with a lamb resting on the top. This denotes the grave of Punky, a beloved farm dog.

The Greenhouse is made by Lord & Burnham

​Attached to the back of the Carriage house is a small greenhouse, built in two parts. This was made by the well-known greenhouse manufacturer Lord & Burnham, who has been making greenhouses since the mid-19th century. They built many famous greenhouses around the country including those at Phipps Conservatory, Reynolda House, Biltmore House, New York Botanical Garden and the United States Botanic Garden. In the mid-1950s they started making kits for smaller homes and this is the curved-eave even span model. Originally it was used to house the many orchids and tender perennials that Lee Taylor had. Now we use it as a propagation greenhouse and start many of our annuals used for the summer display and plant sale here.

There is a foundation of an old structure on the Knoll

​Just outside the formal gardens, on the knoll overlooking the Water Garden, sits the remains of an old building. Only the stone foundation remains. No one really knows what it was. Was it an early house? Slave quarters? An old school building? An old farm out building? There is definitely room for more research.

Pink Pavilion fountain does not have a drain

The sunken garden in front of the Pink Pavilion was a favorite place for entertaining by Julian Glass. The centerpiece of this garden features a fountain. The stone coping around the fountain was brought from Italy. However, because               the fountain sits so low compared to the surrounding landscape, there is no natural way to drain the fountain and the water must be pumped out each time it must be cleaned.

Hedges of boxwood and yew.

There is only a Garden staff 0f 7

​The seven-acre formal garden and as well as approximately another 20 acres of lawn and garden space around the museum gallery building and public spaces are maintained by just a staff of seven people. In addition, a modest but devoted corps of volunteers are essential to making sure we put our best foot forward to guests. It takes a lot of hard work and dedication to keep the gardens beautiful. We hope to see everyone back here soon to enjoy it. 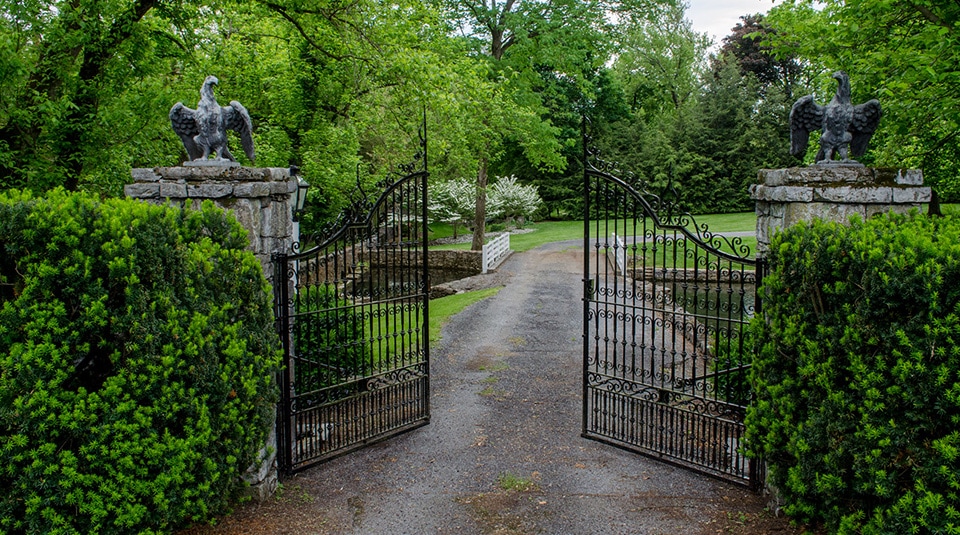 The original entrance at 801 Amherst street. 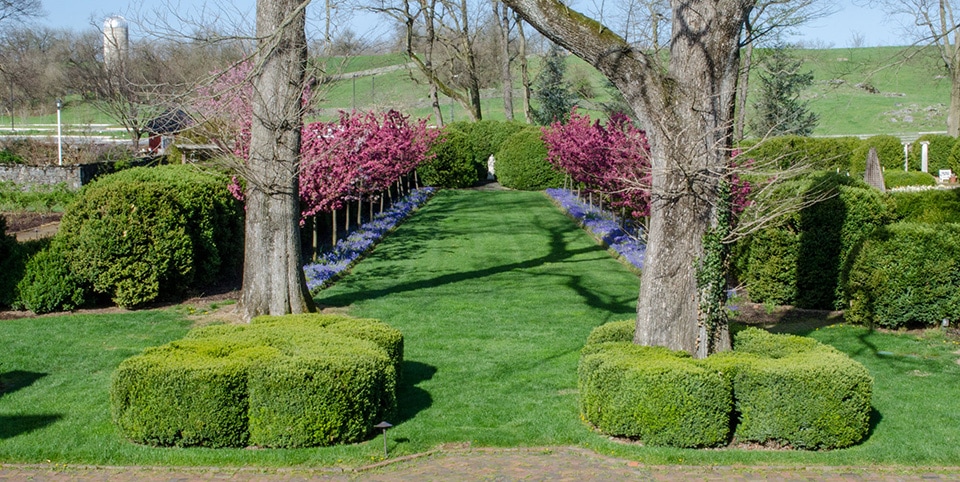 The Grand Allee as seen from the house. 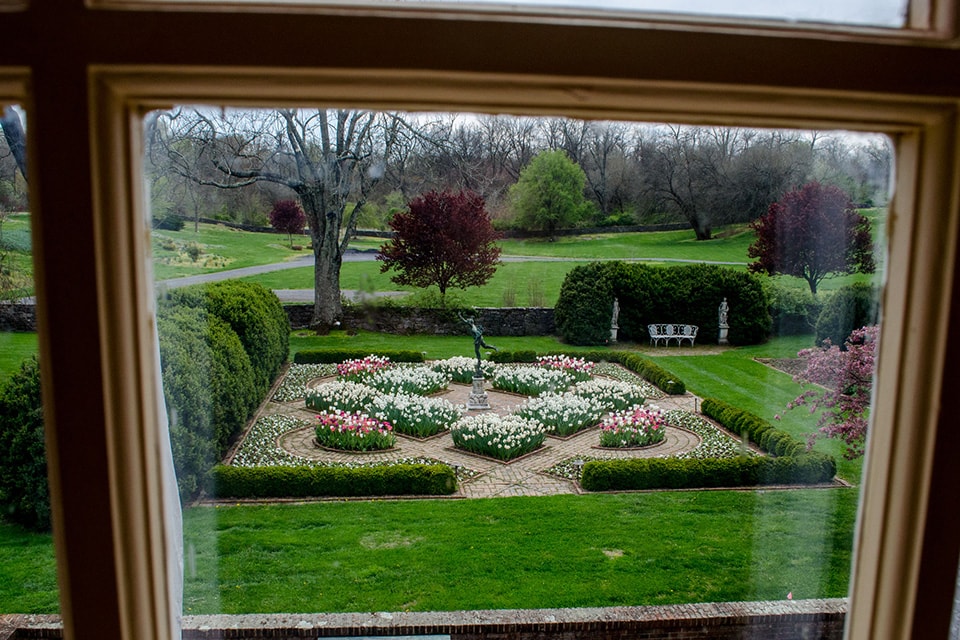 View of the Parterre from the second floor of the house. Thousands of bulbs in bloom.

Dates, makers marks and animal prints found on the bricks in the garden walks.

The remains of an old foundation on the Knoll.