Trails Update: Outstanding in Our Field 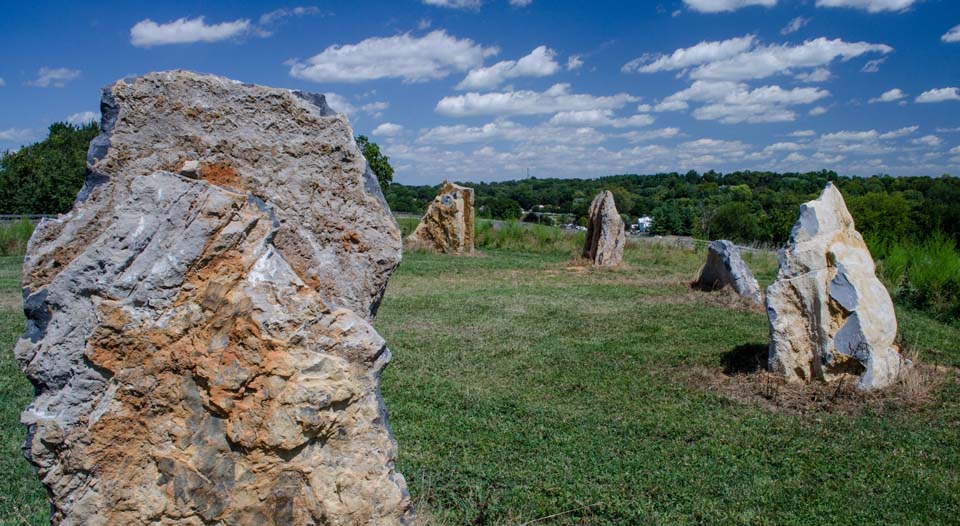 Building a new trail sounds simple, but to create a network of trails over 90 acres can be a challenge.

Everyone is eagerly awaiting the opening of The Trails at the MSV. Infrastructure improvements needed to build the trail are now in place. We’ve added additional parking to accommodate the increased use of the site. We’ve built a new entrance road to provide better access to the trails and will open it to the public once our new entrance sign is constructed. A new, more environmentally friendly stormwater management system has been installed to preserve not only the natural areas but also keep our waterways clean. Now all that is left is to build the trails themselves. 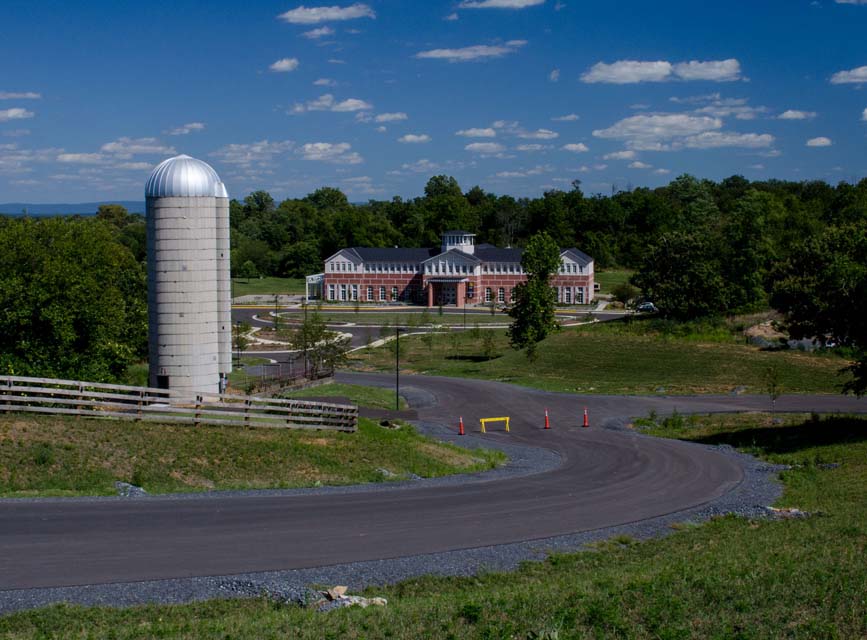 Above: Looking down the new entrance road towards the Museum Galleries Building

Building a new trail sounds simple, but to create a network of trails over 90 acres can be a challenge. Almost two miles of the trail will be ADA compliant, which means a firm surface for wheelchairs and strollers without steep grade changes. Construction will start this fall and occur over a nine-month period as we cut through very dense vegetation, wind the trail up and down ridges, build bridges over low lying areas and even install a floating boardwalk across two acres of wetlands.

When it is done The Trails will be available for everyone to walk, run and even ride bikes. But this is not just a recreation space, it is an Art Park and will be the largest in Virginia. So, what is an art park? Well, since part of our mission is to enrich the cultural life of the Valley, we intend on putting all sorts of art along the trails. It won’t just be bronze statues of stoic men standing to commemorate some time in the past, but a variety of fun and interactive art pieces and installations that will engage people as they pass by. 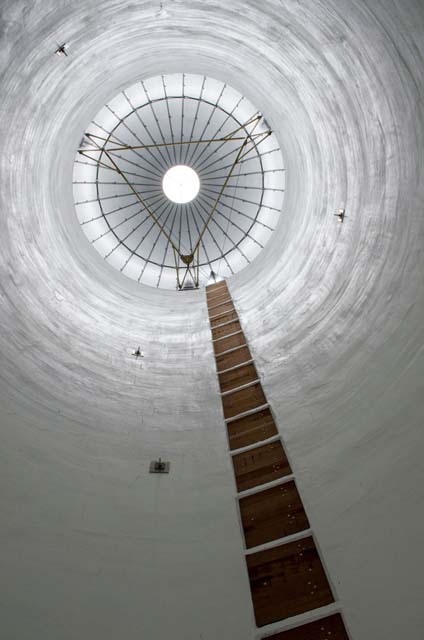 Above: The view from inside the silo 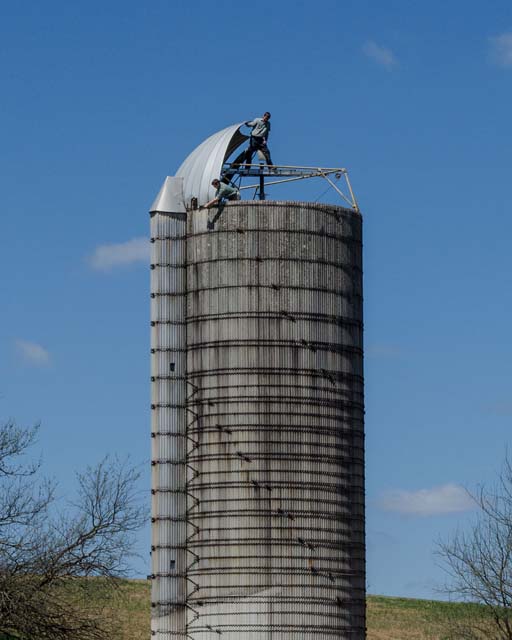 Above: Workers replacing the top of the old silo in April

We already have started to install some of the art features and two of them are visible from the new entrance road. First, and most visible but not most obvious, is the silo. Long a fixture of our farming landscape, we have converted it into an art object itself. Earlier this summer, we cleaned out the old rusty silage equipment inside, scrubbed the outside, put on a new roof (with a translucent oculus) and lined the walls to create a small but tall gathering space. It will be open to the public to explore as is, but it also is a blank canvas for future art installations. Hooks on the wall will allow for hanging large mobiles, sound and light shows can be projected inside, and there is even the possibility of painting a big mural on the outside. Even with all these possibilities, the silo itself is a unique space to explore and gather with friends. 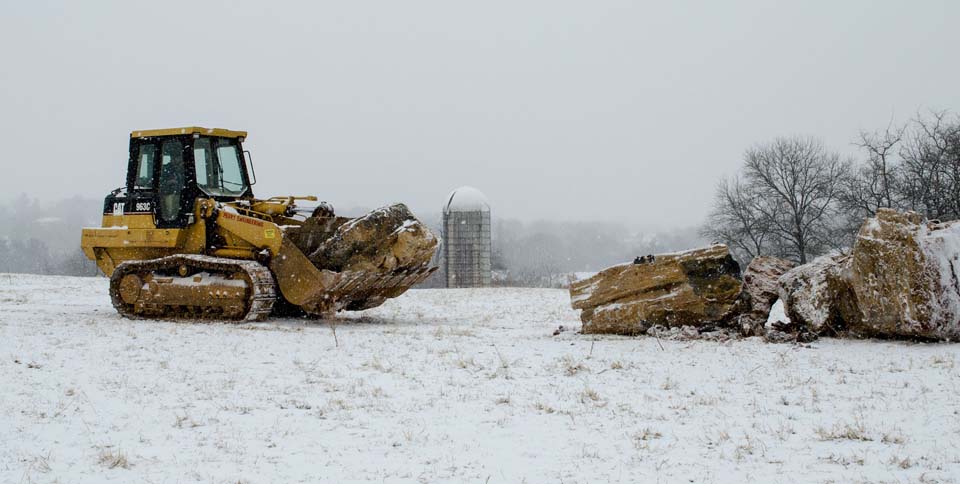 Above: Collecting larges stones in February 2019

Another art installation is part of our largest recycling project. With the construction of the new entrance road, we were left with considerable amounts of stone and soil that was excavated during the construction process. Instead of simply dumping it into a large pile on some remote part of the property, we incorporated it into several artistic landform features. These include a series of “picnic mounds” and a long stone rubble wall evocative of an English “ha-ha.” But by far and away the most interesting is a standing stone circle.

Above: The standing stone circle in a field overlooking the MSV

During construction this past winter, we selected 12 of the largest and most interesting stones that surfaced during the blasting and construction of the new road to incorporate into this new art installation. Once the stones were assembled, we marked out the locations for a large circle at the top of the ridge near the entrance road. We then asked the equipment operators to metaphorically take off their hard hats and put on their artist’s hats. They were given the artistic freedom to place and secure the stones in a circle overlooking the museum campus. The result is a standing stone circle resembling one you might find in Scotland or Ireland. For the record, the circle is not knowingly aligned with sun or moon transits or any of the stars. It is up to you to find any such relationship when you visit. But you can also explore the interesting shapes, the striations in the stone, and the whimsical alignment of the stones to their surroundings. 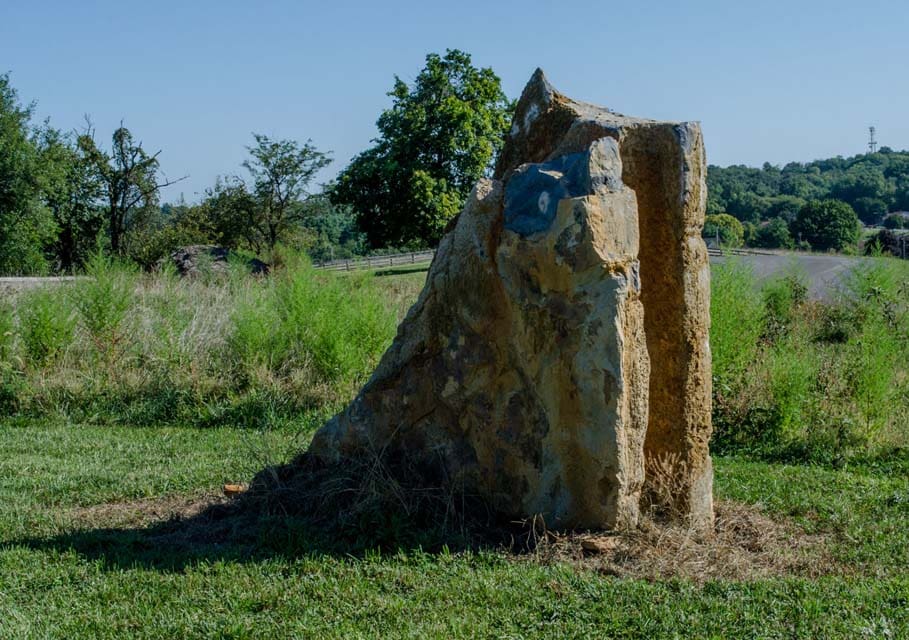 Above: An interesting groove on one of the standing stones

When the entrance road finally opens, we hope you will take the time to explore one, or both, of these art installations. They are just a teaser for more artwork you will find along the trails when it opens next year.