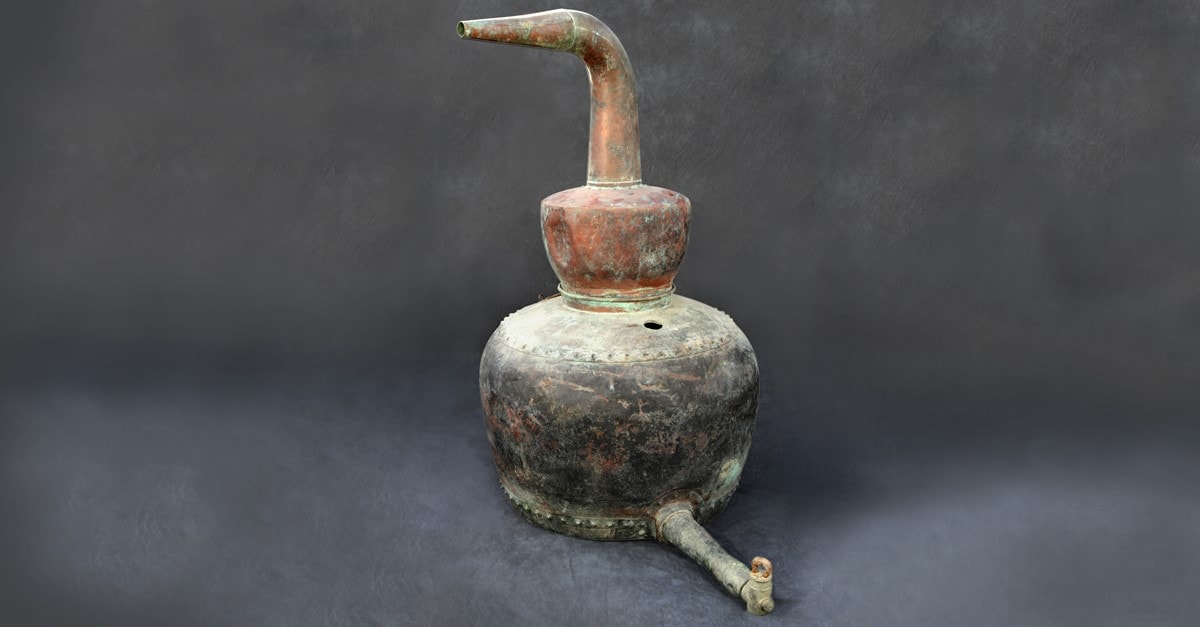 The Public is Invited to Vote for Its Favorite Endangered Artifact Through January 24
The Museum Receiving the Most Votes Wins $5,000 for its Object’s Conservation

Winchester, VA 1/17/18…The public can help the Museum of the Shenandoah Valley win $5,000 to conserve a nineteenth-century still in its collection by voting for the MSV still in Virginia’s Top 10 Endangered Artifacts Competition. Ten endangered artifacts are in the competition, and the public is invited to vote for its favorite now through midnight on January 24 in an online voting poll at www.vatop10artifacts.org.

A project of the Virginia Association of Museums, Virginia’s Top 10 Endangered Artifacts Competition began in 2011 to raise public awareness of the work museums do every day to care for the objects in their protection. Thanks to a generous donation from the Blandford Rees Foundation, this renowned program is, for the first time, providing conservation awards to all honorees, and the two artifacts receiving the most votes will be recognized with the People’s Choice Awards and will receive $5,000 and $4,000 respectively for conservation.

According to Nick Powers, MSV curator of collections, this is the fourth year that the Museum has nominated an artifact in the competition. A portrait miniature from the MSV Collection was named one of the Top 10 Endangered Artifacts in 2014, the MSV’s nineteenth- century portrait [is hyphen correct?] of Storer College founder Reverend Nathan Cook Brackett received the People’s Choice honor in 2015, and the MSV nominated a nineteenth-century portrait of Mary Wood Early for the 2016 competition. As a result of exposure garnered during the competition, donations were received each year to conserve all MSV-nominated artifacts.

This year’s MSV nomination includes a copper still pot, cap, and coils used from about 1898 to 1916 by the James C. Foltz Distillery in Edinburg, Virginia. Powers notes that from the late 1800s until state officials enacted Prohibition in 1916, the Foltz Distillery was Shenandoah County’s premier source for distilled liquors. The MSV selected this year’s artifact from the many objects with conservation needs in the MSV Collection because, says Powers, the still is part of a grouping of objects owned by the MSV that tells the story of making moonshine in the Shenandoah Valley. Along with the still pot, the MSV Collection includes—all from the Foltz Distillery—casks, cast iron brands, licenses, ledgers, and receipts. Because of the poor condition of the still pot and coils, the entire collection has never been on display.

The still pot spent more than 80 years in an outbuilding on the Foltz farm until it was acquired by the MSV in 2001. Due to years of exposure to the elements, the still’s surface has developed a corroded, oxidized layer that, without treatment, will eventually cause the still to fall apart. The still’s coils are also damaged. Rust has developed on the coils’ surface from constantly being submerged in cold water while still in use, and prior to its MSV acquisition, failing sections of the coils were wrapped in duct tape. The cost to conserve the still pot, cap, and coils is estimated at $5,000. Once conserved, the Museum plans to use the still pot, cap, and coils, as the focal point of an exhibit about distilling in the MSV Shenandoah Valley Gallery.

The MSV asks area residents to vote for this special object at www.vatop10artifacts.org before midnight on January 24. Those interested in learning more about the still and its history are encouraged to read the most recent blog post by Nick Powers at www.theMSV.org.

The MSV owns and cares for more than 11,000 objects, including a collection of Shenandoah Valley objects, the fine and decorative objects inherited and acquired by MSV benefactor Julian Wood Glass Jr., and the R. Lee Taylor Collection of miniature houses and rooms. Along with the still, MSV objects most needing conservation include paintings and furniture from its Shenandoah Valley Collection.

A regional cultural center, the MSV is located at 901 Amherst Street in Winchester, Virginia. The MSV includes galleries, the Glen Burnie House, and seven acres of gardens. The galleries and exhibitions are open year-round; the house and gardens are open April through December. Admission is $10 or $8 for seniors and youth ages 13 to 18. General admission is always free to youth ages 12 and under and to MSV Members. Thanks to corporate partner Howard Shockey & Sons, Inc., admission is free to all every Wednesday. Additional information is available at www.theMSV.org or by calling 540-662-1473, ext. 235. –END–