Beatlemania to Hit Gardens at Night on August 9 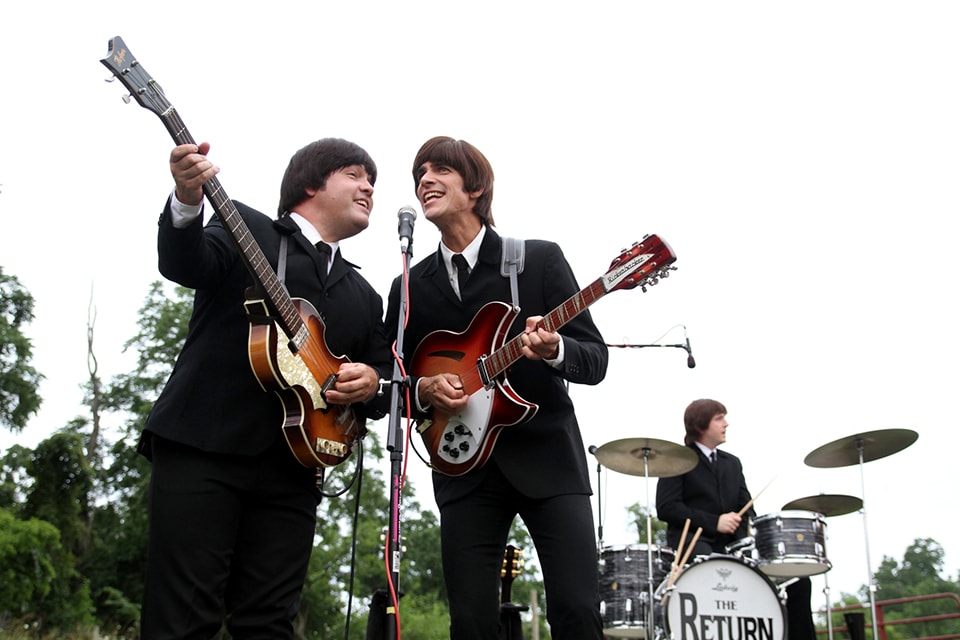 Winchester, VA 7/23/19…Music from renowned Beatles tribute band The Return, family lawn games, and admission to the gardens and galleries will highlight Gardens at Night at the Museum of the Shenandoah Valley (MSV) on Friday, August 9 from 6 to 9 p.m. In addition, those attending will be able to purchase food, beer, hard cider, and wine.

Thanks to the sponsorship of Navy Federal Credit Union, admission is free to all active military personnel and their families and individual retired veterans (military id required). Admission to Gardens at Night is free to MSV Members and ages 12 and under. The ticket price for all others, which includes the concert and admission to the MSV’s seven-acre gardens and exhibitions, is $10. The summer concert series is also sponsored by Shenandoah Country Q102.

Based in Georgia, The Return is known as one of the nation’s best Beatles cover bands. The Return has performed thousands of shows throughout the United States and internationally, including at the famous Abbey Road Studios in London, England, and in Japan where they headlined the 40th anniversary celebration of the Beatles’ visit to Tokyo.

For its Gardens at Night performance, The Return will perform its “Beatlemania” show which celebrates Fab Four favorites from 1963 to 1966. The show will include two sets and costume changes. During each set the band will play Beatles’ hit singles, famous covers recorded by the Beatles, and some lesser-known Beatles songs. During the first set and while garbed in black suits similar to those worn by the Beatles on the February 9, 1964, Ed Sullivan Show, The Return will play “I Want to Hold Your Hand,” “A Hard Day’s Night,” “Roll Over Beethoven,” and other Beatles hits. For its second set, the band will play “Help,” “Day Tripper,” “Rock and Roll Music,” “Twist and Shout” and other songs while wearing tan Nehru jackets similar to those worn by John, Paul, George, and Ringo during their famous Shea Stadium concert in August of 1965.

Along with live music, Gardens at Night features free family activities. From 6 to 8 p.m. children may play a variety of lawn games, including hula hoops, cornhole, and a giant Jenga set.

Throughout the evening, attendees may experience the Museum’s seven-acre gardens and explore the MSV galleries. Current exhibitions include Tiffany Glass: Painting with Color and Light and Steinlen: Cats, an exhibition of feline-themed works by Théophile-Alexandre Steinlen organized by the Virginia Museum of Fine Arts. A traveling exhibition presenting lamps and windows made by the famous Tiffany Studios, Tiffany Glass: Painting with Color and Light is organized by the Neustadt Collection of Tiffany Glass, Queens, New York.

Those attending Gardens at Night at the MSV also may purchase food and drinks at the event. The Skrimp Shack, J & M Concessions, Crash Test Yummies, and Shaffer’s BBQ food trucks will be at Gardens at Night. Talk of the Mountain Seafood, Chick-fil-A, and My Buddy’s Nuts will also be at the event selling meals and gourmet nuts and snacks. Adult beverages available for purchase include wine from Round Hill’s Bogati Winery (whites and reds; available by the bottle/glass), beer from Winchester Brew Works (12 oz. pour; $7), and hard cider from Winchester Cider Works. Water will also be available for purchase ($1). No outside food or drinks will be permitted in the concert area.

The gates will open for seating at 5:30 p.m. and the gardens, galleries, and food trucks/drink stations will open at 6 p.m. The music will begin at 7 p.m. The concert will take place on the lawn by the MSV. All those who plan to listen to the musical performance should bring their own chairs. The concert will take place outdoors rain/shine and attendees should dress for the weather.

Following the August concert, the Gardens at Night concert series will conclude on September 13 with Eagles tribute band Alter Eagles.

The MSV is located at 901 Amherst Street in Winchester, Virginia. The MSV complex—which includes galleries and exhibitions, the Glen Burnie House (not open during Gardens at Night), and the gardens—is open Tuesday through Sunday. Additional information is available by calling 540-662-1473, ext. 235, or referring to www.theMSV.org. – END –

About Navy Federal:
Navy Federal Credit Union is the world’s largest credit union with more than 8 million members, 328 branches, and a workforce of over 18,000 employees worldwide. The credit union serves all Department of Defense and Coast Guard active duty, veterans, civilian, and contractor personnel, and their families. For additional information about Navy Federal, click here.