26 Costumed Actors to Recreate Scenes from Alice in Wonderland; Each Event, on July 13, 20, and 27, to Conclude with a Tea Party

Winchester, VA 7/8/14 . . . Twenty-six costumed actors will recreate scenes from the famous nineteenth-century English novel Alice in Wonderland in special afternoon performances on July 20 and 27 in the Glen Burnie Gardens of the Museum of the Shenandoah Valley. 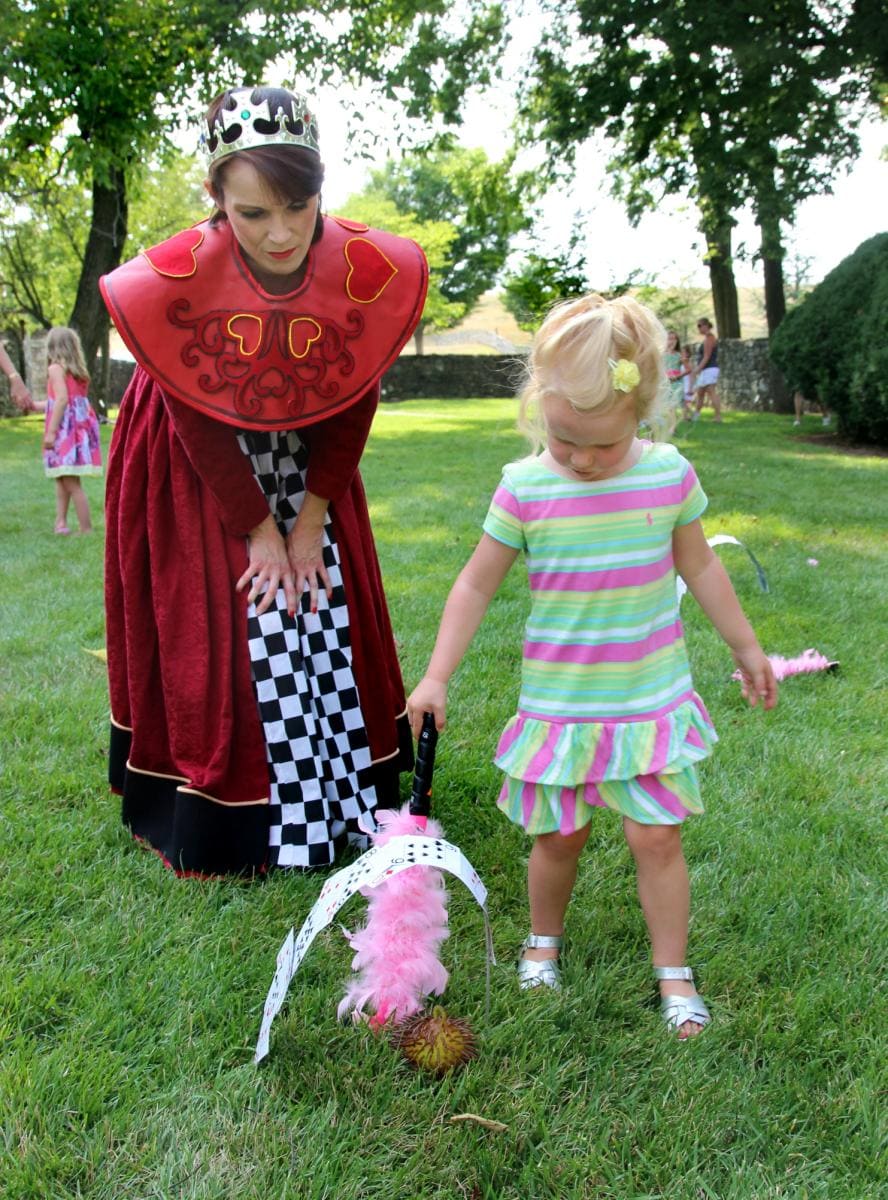 From 4 to  6 p.m. on each date, the events will take place in various garden spaces throughout the gardens, with those attending the event walking from scene to scene to see the story unfold.

Those attending the events also can expect to meet and interact with famous characters from the novel—including Alice, the Mad Hatter, the March Hare, the White Rabbit, and the Caterpillar—and even have the opportunity to play croquet with the Red Queen. Each event will conclude with a tea party offering light refreshments in the gardens’ Pink Pavilion.

According to MSV Executive Director Dana Hand Evans, the performances will be entertaining for adults as well as children of all ages, making these events a perfect family activity. “We are delighted to use the gardens to present such fun programming for this community,” says Evans.

Serving as the event’s theatrical director is Sally Anderson, who has shared the stage with Prince Charles, David Hare, and Germaine Greer and has been a dialogue coach for Jessica Tandy and Hume Cronyn. Educated at the University of Toronto, Cambridge University, and The Royal Shakespeare Company, she was a founder of the Theatre Artists Workshop of Westport, Connecticut, where she stage-managed a production featuring Joanne Woodward and Shirley Knight. She has appeared in videos and three films, has recorded audio books, teaches at Shenandoah Conservatory, and has appeared in productions of Winchester Little Theatre and Shenandoah Summer Music Theatre.

Alice’s Wonderland Adventures at the MSV marks the Museum’s second collaboration with Anderson, who also directed the highly successful performances of The Hollow Crown, which were part of the MSV Glen Burnie House Grand Reopening events in June. She also will direct outdoor performances of Shakespeare’s Green World in the Museum gardens in September.

The 26 actors participating in Alice’s Wonderful Adventures range in age from 7 to 80. Among them are Richard Bennett, Geoffrey Anderson, and Maria Santucci, all who performed in The Hollow Crown. Many other actors taking place in July’s performances at the MSV are affiliated with Winchester Little Theatre, Shenandoah University (Brandon Spann, Tessa Goodnight, and Katie DeFiglio), and/or have performed with the Rouse City Hall Mystery Tour, including Juliann Flynn, Bill Westguard, Sarah Celec, Randy Orndorff, and Jennifer, Rachel, and Willow Oliver. Also having performed in the mystery tour and playing the role of the Jabberwocky is the Rev. Cameron Keyser from Stephen City Trinity Lutheran Church. La Tasha Do’zia Earley of the Selah Theatre Project will be playing the Dodo, with many of her young actors in the roles of the Cards.

Tickets for the performances are $15 each (includes performance, cookies, and tea). Adults must accompany children. Tickets must be purchased in advance by calling 540-662-1473, ext. 208, or online at www.theMSV.org.

The Museum of the Shenandoah Valley is located at 901 Amherst Street in Winchester, Virginia.  The MSV complex—which includes the Museum, the Glen Burnie House, and six acres of gardens—is open Tuesday through Sunday. The galleries are open year-round; the gardens are open April through October. Additional information is available by calling 540-662-1473, ext. 235, or referring to www.theMSV.org.